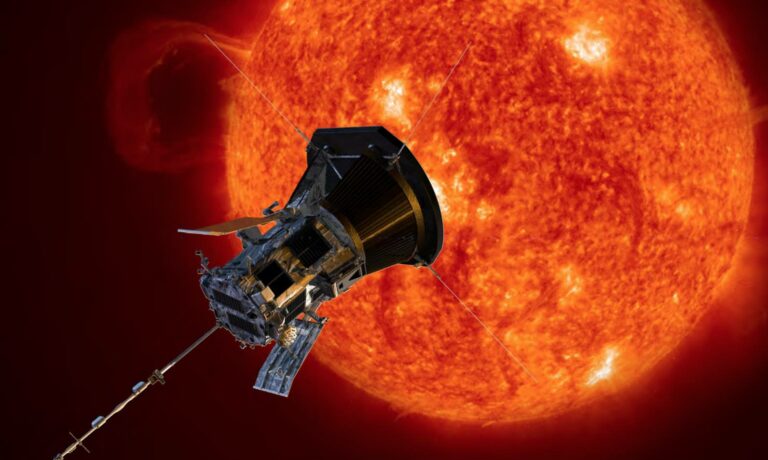 Faster than a speeding bullet, NASA’s Parker Solar Probe may not be Superman, but it certainly is breaking records for being the fastest object humans have ever sent into space.

In fact, clocking in at more than 330,000 miles per hour as it recently entered the sun’s outer atmosphere, it is not only the fastest spacecraft on record, but the fastest object humans have ever built, period.

Back in February, the Parker Solar Probe managed to travel to within a record breaking 11.6 million miles from the sun at an equally impressive 244,255 miles per hour. Smashing its own records, in late April the probe topped out at the aforementioned 330,000 miles per hour as it coasted to within just 6.5 million miles of the solar globe, setting a new record for being the closest spacecraft to fly near the sun.

At such blinding speeds, the Parker Solar Probe would be able to circle planet Earth 13 times in just 60 minutes.

Speeding past the sun isn’t all that the Parker Solar Probe has been up to in recent months. NASA also just announced that during its transit of Venus last year, the probe managed to pick up a natural radio signal emanating from the planet, meaning that the probe must have passed through the planet’s upper atmosphere.

“This was the first direct measurement of the Venusian atmosphere in nearly 30 years,” NASA said in a statement, adding that after three decades, things are looking a bit different from how they did in years past.

According to a new study published in Geophysical Research Letters, Venus’ upper atmosphere undergoes a number of unusual changes throughout the course of the sun’s 11-year solar cycle.

“This marks the latest clue to untangling how and why Venus and Earth are so different,” NASA says of the study.

The space agency also produced a “sonification” of the data retrieved by the Parker Solar Probe, which makes it possible to listen to the strange sounds of the radio signals it captured while passing Venus last year:

The data which produced these sounds were collected with the probe’s FIELDS instrumentation, which detected and recorded the low-frequency radio emission as it passed.

The recording is useful for reasons other than resembling a sound effect from a vintage science fiction film. According to NASA, the data “helped scientists calculate the thickness of the planet’s electrically charged upper atmosphere, called the ionosphere.”

“Understanding how Venus’ ionosphere changes will help researchers determine how Venus, once so similar to Earth, became the world of scorching, toxic air it is today,” NASA says.

In addition to recording the strange sounds of Venus and breaking its own speed records, the probe has been obtaining unique data about our sun, which includes new information about the plasma dynamics of our nearest star, involving the behavior of charged particles in the sun’s outer atmosphere.

Later this year, the Parker Solar Probe will return to Venus again during its next slingshot around the planet prior to heading back toward the sun. The probe’s next closest approach to the sun (called Perihelion) will occur on November 21, at which time the planet is expected to break its own records for blazing speed yet again.