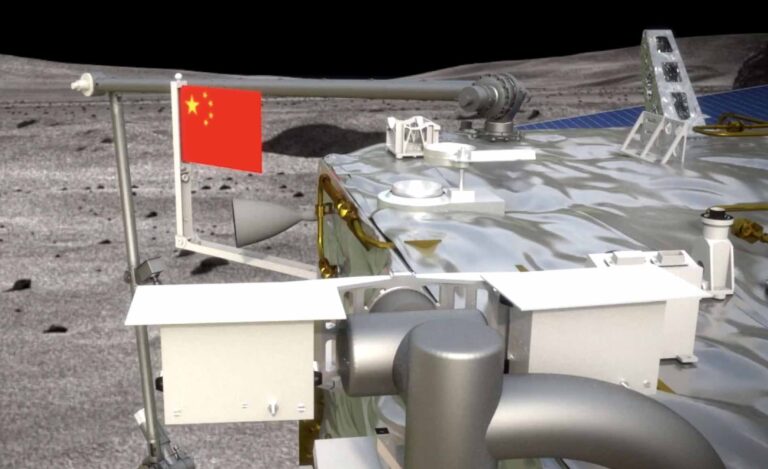 New evidence of native water located on the lunar surface has been discovered in samples being studied by the Chinese Lunar Exploration Program’s Chang’E-5 lunar lander.

Now, the samples, which were retrieved from the Oceanus Procellarum region on the western edge of the Moon’s Earth-facing side, appear to point to a likely source of water on Earth’s natural satellite.

Researchers with the Key Laboratory of Lunar and Deep Space Exploration at the National Astronomical Observatories, Chinese Academy of Sciences in Beijing published the results of their analysis in Nature Communications.

“A wide range of evidences indicates the presence of water (H2O/OH) on the lunar surface from a diversity of potential sources,” the authors wrote, calling detection of water on the Moon “one of the most important discoveries in planetary science and a crucial milestone for lunar scientific research.”

“For the first time in the world, the results of laboratory analysis of lunar return samples and spectral data from in-situ lunar surface surveys were used jointly to examine the presence, form and amount of ‘water’ in lunar samples,” said LI Chunlai, a coauthor of the Nature Communications paper with the National Astronomical Observatories of the Chinese Academy of Sciences (NAOC).

“The results accurately answer the question of the distribution characteristics and source of water in the Chang’E-5 landing zone,” Chunlai said in a news release, “and provide a ground truth for the interpretation and estimation of water signals in remote sensing survey data.”

According to the research paper, the water discovered by Chang’E-5 came in the form of traces of hydroxyl located in the lunar soil samples, comprising hydrogen and oxygen molecules which Chunlai called evidence, while noting that the hydroxyl traces were on the “weak end of lunar hydration features.”

Significantly, the samples yielded this evidence during a collection period coinciding with temperatures on the lunar surface close to 200°F, the hottest and driest period in the entire lunar day. The fact that hydration was still detected under such conditions prompted the research team to look for possible sources, which led to the discovery of glassy residue believed to originate from solar winds that bombard the Moon.

Compared with past analysis carried out on samples retrieved by the Apollo 11 mission in 1971, the recent samples contained far less hydroxyl-rich glass, meaning that solar wind bombardment occurs less at the Chang’E-5 landing site that at previous collection sites.

According to Chunlai, the hydroxyls observed in the recent samples clearly conveys “the presence of lunar-originated internal water,” which the research team believes to have played “an important role in the formation and crystallization of the late lunar basaltic magma.”

The results of the team’s study, titled “Evidence of water on the lunar surface from Chang’E-5 in-situ spectra and returned samples”, can be read online.

Going forward, the Chinese research team is preparing for future explorations of the Moon with the help of the next generation of lunar landers, Chang’E-6 and Chang’E-7, which will continue to search for traces of water at various locations on the Moon that include its polar regions.