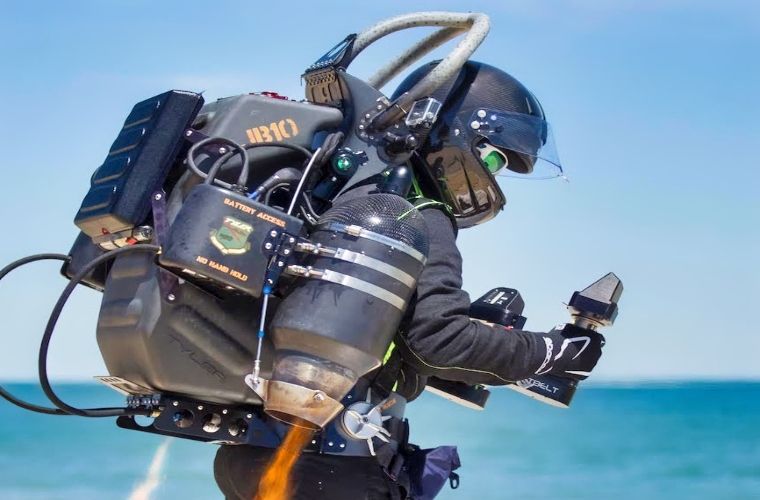 While it may be hard to believe, jetpacks have been around since 1961, and that’s only how long the public has known about them. While they’ve shown up in plenty of movies, including the James Bond film Thunderball, they haven’t proven to be particularly practical. They tend to be expensive, have relatively short ranges of flight, and somewhat dangerous to operate.

Jetpacks have been back in the news quite a bit recently. There have been repeated sightings by pilots in the airspace of Los Angeles International Airport of what’s come to be known as “Jetpack Guy.” (Suspicions have been growing that it might have been a drone.) However, with the recent announcement from DARPA, many have begun to wonder if American soldiers will be zooming through the skies in the fashion that Ian Fleming once imagined.

BACKGROUND: THE US MILITARY HAS BEEN INTO THIS FOR A WHILE

DARPA isn’t breaking entirely new ground here. Jetpacks are classified as individual lifting devices or ILDs, and the American military has been looking at ways to utilize them for a while. Several years ago, U.S. Special Operations Command (SOCOM) began partnering with JetPack Aviation, a California company widely considered to be a global leader in this technology.

JetPack Aviation has made significant breakthroughs that make jetpacks appear far more suited to at least some practical uses for the military. In 2019, they unveiled a turbine engine-driven model capable of reaching 200 miles per hour with a flight time of up to ten minutes. It runs on the commonly available Jet-A fuel already used by the American military, so the machine showed tremendous promise.

It’s also worth noting that America isn’t alone in exploring Jetpacks as a way to expand its military capability. Last year, the British Royal Navy established a similar partnership with Gravity Industries. They’ve been experimenting with the equipment to see if elite units employing jetpacks could be used to swarm enemy ships at sea. Something tells me that there’s an action movie script laying around in someone’s desk in Hollywood that’s about to undergo some fast edits.

Analysis: SO WHAT DOES DARPA THINK THEY CAN DO WITH JETPACKS?

So far, DARPA isn’t very clear about how it will be using this technology, as you might expect. In general terms, their proposal suggests that special forces wearing jetpacks could be deployed by air (from either planes or helicopters) to allow for covert infiltration of hostile territory or to provide vertical takeoff capability from terrain where a conventional helicopter or jump-jet might not be practical.

DARPA is describing this partnership as an effort to develop what they are calling “Portable Personal Air Mobility Systems.” They are open to various approaches using breakthroughs or improvements to existing technology, and jetpacks aren’t the only type of ILDs they are willing to consider. They’re also looking at the possible use of powered gliders, powered wingsuits, and powered parafoils.

Testing is expected to continue in the coming years. DARPA is taking the subject seriously, and they have a fairly generous budget, so it’s not out of their reach. Given the nature of all the men and women with “the right stuff” in the U.S. military, I’m sure there will be no shortage of volunteers willing to strap one of these machines on their back and take off.

Outlook: COULD JETPACKS BE USEFUL IN COMBAT?

Military analysts have been pondering the potential military applications for jetpacks for quite a while. In 2013, analysts were already pointing out some of the pros and cons of deploying soldiers in this fashion. On the plus side, anything that small and fast could be of significant value during covert operations where a small number of troops need to infiltrate an adversary’s territory and extract themselves quickly. As the British military suggested, a small squad of flyers could potentially board an enemy ship more rapidly than attempting a boarding from a conventional naval vessel, gaining the element of surprise.

Significant limitations have been pointed out as well, however. Jetpacks are too heavy to keep lugging around in a combat situation, so they might turn out to be expensive, single-use vehicles that have to be abandoned after the troops land in the target area. Even with the advancements made by JetPack Aviation, ten minutes still doesn’t give you that great of a range. And if you use more than half of your fuel getting there, you’re going to be walking at least part of the way back.

It’s also been pointed out that engaging in any firefight while flying a jetpack will likely prove to be virtually impossible. Flying one of these machines is hard enough as it is, but the recoil of a rifle while not being braced on solid ground would twist the pilot around in the air. Sorry, fans, but dreams of a Buck Rogers character raining down lead on the enemy while zooming over their heads probably won’t be practical any time soon.

While it may not be DARPA’s primary focus, the “coolness factor” of a military jetpack squadron can’t be ignored. And imagine if they manage to finish developing that artificial skin they’ve been working on. Invisible, jet-powered flying soldiers? Sign us up, please.