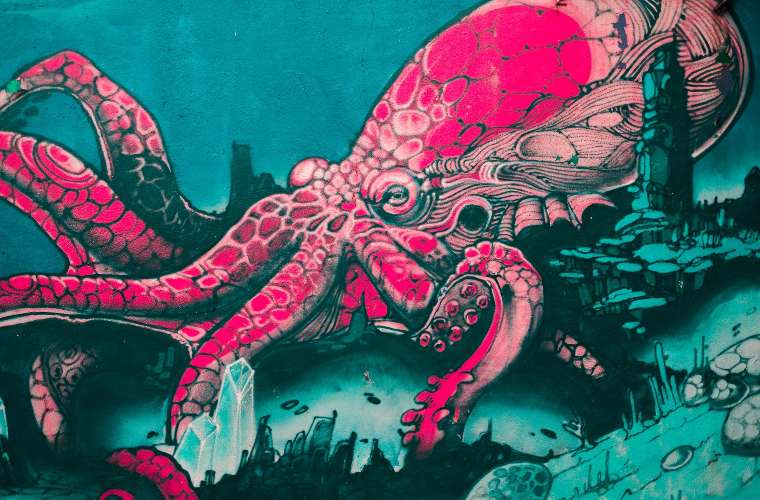 Through pop culture and real-life discourse, there have been worries about invasions from space or threats from other foreign adversaries. Still, the most intelligent super-powered villain could be lurking in the depths of the sea. Curious Kids has posed the question: what if massively-evolved octopuses (yes, it is octopuses and not octopi) were able to rule the world and then the entire universe?

The octopus has long been one of the ocean’s most intelligent and adaptive phylum with camouflage/color-changing abilities and limb regeneration. They pass intelligence tests, perform tasks like opening containers, and can physically communicate with other octopuses. Their brains are large; 500 million neurons (brain cells), and by comparison, humans have 86 billion brain cells. They evolve slowly. In 300 million years, just 300 species have existed, which could be attributed to their ability to alter their genetic instructions via RNA editing. This has given the species an evolutionary advantage. They can increase the variation in the proteins they produce, thus allowing them to adapt to evolving environments, such as polar waters.

Octopuses have gills and can breathe through wet skin, with 40 percent of the oxygen passing through the skin.

ANALYSIS: Can Octopuses Take Over the World?

If octopuses were able to evolve and move to cosmic conquering, then they’d have to adapt their ability to breathe in space.

Humans and octopuses both have large brains, but humans are social creatures. We live together, work together, and, when it comes down to it, conquer together. Octopuses are competent enough, but they focus on survival and not seizing control of territory. Octopuses, even with their high intelligence and openness to evolving, still don’t socialize, so for those fearing an octopus takeover of Earth, they can relax for now.

According to scientists, this is why the ability to learn from others matters and species without it lack that development to move up in the food chain. Social organization allows for planning, and in the case of invasion, scheming. Mauricio Forero, an evolutionary biologist at the University of St. Andrews in Scotland, believes that animals aren’t necessarily disqualified from this claim.

“If we find that difficult environments favor human brain expansion, this raises the question, why humans? Why not other species?” Forero told Vox. If it is “other species,” even with their slower evolution time, octopuses still hold superior intelligence to many other under-the-sea dwellers.

“They behave smartly, they do all these novel, inventive things – that line of reasoning doesn’t resolve things, by any stretch,” said Peter Godfrey-Smith, a philosopher and Harvard professor to The Guardian. “There’s still a somewhat mysterious element there.”

Even with the large brains, octopuses suffer from shorter life spans, so they may not be exiting the oceans and enslaving humanity soon.

Hyper intelligent animals threatening humanity’s stronghold on Earth are no stranger to pop culture. Planet of the Apes saw human society fall to civilized monkeys, and dolphins even took over the world in The Simpsons. Octopuses have a long way to go before outsmarting the masses and moving on to space, but they genuinely offer abilities that are alien to man. As more studies continue to test octopuses and other similar species’ intelligence, more of the complex cognitive “superpowers” of octopuses may come to the surface.