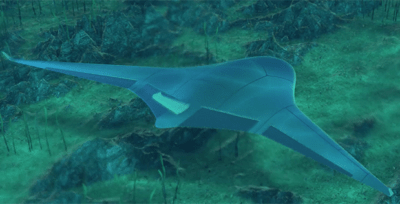 DARPA’s ‘Manta Ray’ Underwater Drone Could Be a Game Changer

With Manta Ray, DARPA hopes to field a payload-capable UUV able to operate for long-duration, long-range missions in ocean environments. One of the most critical components of Manta Ray is the development of new undersea energy harvesting techniques that could end up having an immense impact on all sectors of the naval and maritime industry.

the desperate need for naval drones

In the spring of 2019, the Manta Ray program began when DARPA’s Tactical Technology Office hosted a proposers day meeting expressing the agency’s need for a novel extended range UUV platform. Some of DARPA’s requirements for Manta Ray are classified and remain unknown. The initial proposers day session was classified at the SECRET level, and potential proposers had to hold, at minimum, an active SECRET clearance to attend.

This week, DARPA announced the completion of preliminary design reviews and that three of the previously selected four companies were chosen to advance their Manta Ray concepts. In an announcement, DARPA said Northrop Grumman and Martin Defense Group were chosen to move forward with overall vehicle design in preparation for vehicle fabrication and testing. Additionally, Metron, Inc. will continue working on energy solutions for the prototype UUVs.

“The goals of this new class of undersea vehicle and its critical component technologies are to inform, as well as transition into, future Navy UUV efforts,” said CDR Kyle Woerner, program manager for Manta Ray.

The Department of Defense has identified the development of both underwater and surface unmanned vehicles as a pressing need for the U.S. Navy right now. A Congressional Research Service report, issued in late December 2020, notes the Navy’s desire to rapidly field unmanned vehicles into its fleets “can be viewed as an expression of the urgency that the Navy attaches to meeting future military challenges from countries such as China.”

The U.S. Navy has a couple of different large-scale underwater drones currently in development. The Boeing Orca intends to be an “extra-large” UUV, capable of launching from a forward operating port or pier and capable of deploying modular payloads, including underwater mines. Meanwhile, another program, code-named “Snakehead,” will be a large-displacement unmanned undersea drone that can be carried and deployed by nuclear-powered submarines.

A June 2020 study of future Navy force-level requirements by the DoD recommended, among other things, a future Navy would need as many as 50 extra-large unmanned underwater vehicles or XLUUV.

Manta Ray Could Be a Renewable Energy Game Changer

To date, renewable naval propulsion has either involved human-propelled vessels or sail-powered ships. One is extremely labor-intensive, the other uncontrollable and dependent on when and where the breeze blows. Modern alternative methods, such as coal and oil, are costly, require frequent refueling, and negatively impact the environment. Meanwhile, advanced techniques involving nuclear reactors require large vessels, are expensive, and pose potential hazards to the crew and environment.

For small underwater drones, which cannot carry a nuclear reactor or large-capacity batteries, to carry our long-term underwater missions, the development of novel energy technologies is an absolute necessity. As a Department of Energy (DOE) report on underwater vehicle charging notes, “Although AUVs [autonomous underwater vehicles] are a cheaper alternative to traditional vessels, power capacity of the vehicle’s battery remains a limiting factor and keeps their missions limited in range and duration, often as little as 24 hours.”

“Gates of Hell” to Finally be Extinguished

With Manta Ray, DARPA plans to advance critical technologies that could ultimately benefit future UUV designs, including the development of:

Ultimately, Manta Ray and the development of new novel underwater energy methods could end up being one of the biggest game-changers in modern naval history. “If successful, this new class of UUV will give the combatant commander an amplification of capacity without disrupting current operations by remaining independent of manned vessels and ports once deployed,” notes a statement provided by DARPA.

In hopes of discovering a breakthrough undersea energy solution, Manta Ray program participant Northrop Grumman announced a partnership with Seatrec, a California company that focuses on harvesting renewable energy for underwater drones. Seatrec holds multiple patents and has invented several products that extract energy from the ocean’s thermal gradient – the difference in temperature between warmer mixed water near the surface and colder water below — and converting it to electricity.

Later this year, the three selected contractors will advance their Manta Ray designs toward maturity before an anticipated “Phase 2” involving fabrication and testing will begin.

“Manta Ray performers have each taken unique approaches to solving the wide range of challenges related to UUV endurance,” said CDR Woerner. “To me, this is a clear sign we are tackling a complex problem without a clear ‘one size fits all’ solution.”