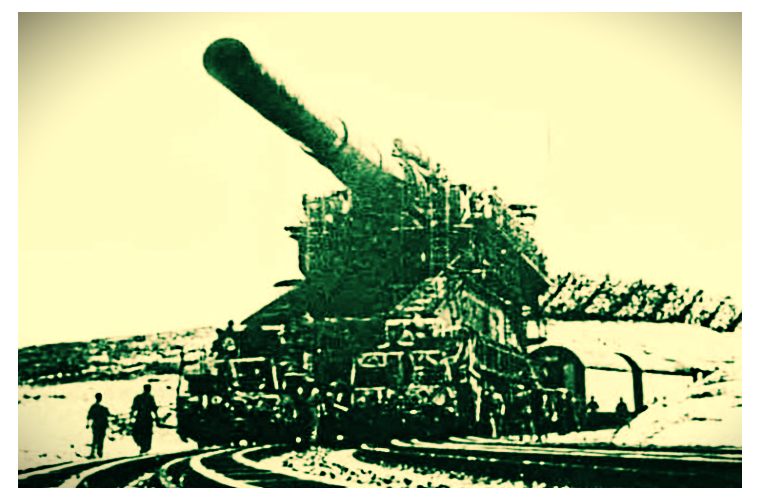 During World War II, the Nazis built the largest-caliber rifled weapon ever used in combat: the Schwerer Gustav railway gun. At 1,350 tonnes, the Gustav is also the heaviest mobile artillery piece ever built. Gustav could fire a colossal seven-ton shell up to 29 miles. Yet, the Gustav was only used in combat once, for twelve days, at the siege of Sevastopol. Positioning the railgun outside of Sevastopol was an ordeal, requiring 4,000 men working five weeks, building specialized railway tracks. For all the effort and expense, the railgun was fired just 47 times. After Sevastopol, the Gustav was never used again.

At first glance, Gustav may seem like a flat-out, failed military experiment. And it was, by most metrics. But Gustav’s primary failure was lousy timing. Gustav missed the opportunity to serve the super-specific purpose for which it was designed: destroying the French Maginot Line.

A marvel of engineering, the Maginot Line is a 280-mile long network of concrete, steel, and iron fortifications, obstacles, and retractable turrets. Designed to discourage a head-on German invasion, the French spent a decade creating the Maginot Line in the foresight of German aggression. The Germans, aware of this new, sprawling wall to their west, began planning countermeasures.

In 1934, five years after the construction of the Maginot Line had begun, the German Army High Command commissioned the steel company Krupp to design a weapon capable of destroying the impressive Maginot Line. Given the specifications of the Maginot defenses, the Germans required a gun that could penetrate through seven meters of reinforced concrete or one meter of steel armor. And the gun would need to supply such power from a firing range beyond the range of French artillery. Essentially, the Germans were asking for a behemoth. Krupp drafted several possible designs but held off on constructing what would become the world’s heaviest gun.

By 1941, the test model had been fully constructed and thoroughly tested. As requested, the gun could punch through seven meters of reinforced concrete. And the weapon could fire from beyond the range of France’s artillery–which Krupp proudly demonstrated for Hitler, in person, at the Rugenwalde Proving ground. Hitler was impressed. Two railguns were ordered. The first off the production line was the Schwerer Gustav.

In delivering the Gustav to the Nazi Army, Krupp maintained a company tradition; Krupp did not accept payment for the first gun delivered–remarkable chivalry given that the second gun, the Dora, was billed at seven million Reichsmarks (or $24 million USD in 2015).

Of course, while Gustav was in development, France had capitulated (quickly)–so Gustav would never serve its intended purpose. But the Nazis felt that Gustav might have utility in the east, where the Soviets were entrenched, stubbornly.

Mobilizing Gustav was an epic logistical hassle. The railgun required a specially designed chassis supported by eight bogies on two parallel railway tracks. Each of the eight bogies had five axles. So, moving the Gustav needed 40 axles and 80 wheels. Bound for Crimea, Gustav was transported in a 25-car-long-train, which snaked for nearly a mile. Arriving in Crimea by March 1942, Gustav was held, waiting while the Nazis built the four specialized semi-circular tracks needed to maneuver Gustav into various, precise firing positions (plus the additional outer tracks facilitating the crane access needed to assemble Gustav). Installation of the railgun did not begin until early May. Four thousand men worked for five weeks straight, and by June 5th, Gustav was finally ready for combat.

Snowball Earth: Was the Surface of Our Planet Ever Completely Frozen?

Gustav’s firepower was awesome. But operating the railgun defied pragmatism. Allied aircraft had an easy time spotting the massive gun, requiring the Nazis to dedicate significant resources toward Gustav-related anti-air defense. And calibrating Gustav to fire just one shell took hours. If the 500-man crew worked around the clock, they would only be able to fire Gustav 14 times per day. Upkeep was a nightmare, too. Gustav’s 106-foot barrel had worn out after firing just 300 shells (250 in testing). The primary barrel had to be shipped back to Krupp for relining, while an auxiliary barrel was attached.

By July 1942, there was nothing left for Gustav to target. The Nazis had leveled Sevastopol. Gustav was disassembled and shipped north to wipe Leningrad from existence. When plans to attack Leningrad were canceled, Gustav stood by, operational, ready for combat, yet already a relic.

Nearly three years later, in April 1945, with Nazi forces in unmitigated retreat and with Hitler functionally entombed in the Fuhrerbunker, Allied forces discovered the ruins of Gustav in a German forest. The railgun had been destroyed to prevent capture or reverse engineering. Soviet experts studied the novel weapon before shipping Gustav’s remains to Merseburg during the Autumn of 1945. Merseburg is Gustav’s last known location; the gun has since been lost, a mystery tucked within the byzantine sprawl of Soviet Russia’s military-industrial complex.

Given the expenses, staffing, and brainpower required to operate Gustav, the gun was simply not worth the investment. The excessive spending and tangential military planning that spread Nazi Germany’s limited resources so thin are well demonstrated with their railgun project. The Nazis spent years and millions developing a gun that required thousands of people to operate on specialized railway tracks. The logistical nightmare facilitated the firing of just 47 shells and the raising of a few Crimean forts. Undoubtedly, the resources that were committed to Gustav would have gone further elsewhere.