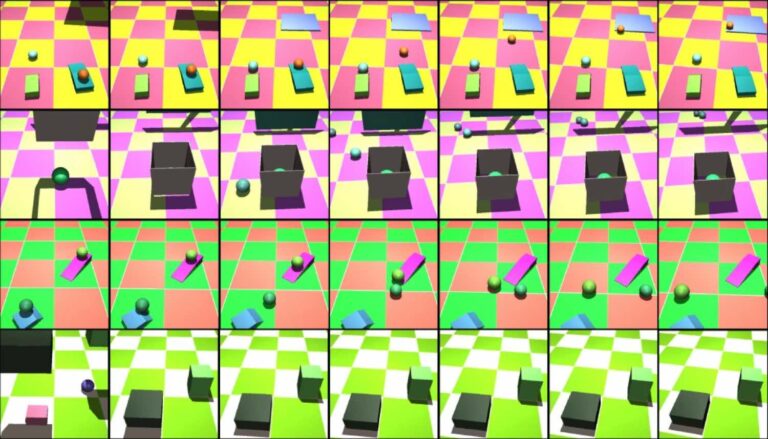 Grasping the complexities of physics can often be challenging in a learning environment. While our knowledge of physics helps to explain how the world works, many things about our physical universe remain mysterious, and can present challenges for scientists. Because of this, many are looking toward the promise of artificial intelligence (AI) in the years ahead, which could have an easier time understanding physics concepts than we do.

Currently, researchers at DeepMind, a UK-based tech company, have found that using videos to explain physics properties shows that their current AI system seems to have an intuitive curiosity for physics. However, that doesn’t mean they haven’t encountered a few challenges along the way.

Starting in 2010, DeepMind made a name for itself with the innovation of next-level AI programs and algorithms. The company was acquired by Google in 2014, allowing them to become even more enmeshed in the tech industry.

With different departments ranging from research to ethics, DeepMind tries to look at all impacts that an AI system may have on a company or industry. In their current testing phases, DeepMind has already succeeded in developing AI that can win chess games, and even write its own coding. Now, looking to advance this technology even further, DeepMind researcher Luis Piloto and his team decided to try to teach an AI system the fundamentals of physics. To do this, they created a specific AI called Physics Learning through Auto-encoding and Tracking Objects, or PLATO.

PLATO was designed to learn the fundamentals of physics by tracking basic objects. The researchers used videos of objects, such as balls, falling, bouncing, or rolling. PLATO also analyzed numerical data from the videos to see which pixel belonged to what object. These videos were supposed to teach PLATO physical concepts like solidity, but many of the videos that were shown featured nonsensical circumstances, as well as optical illusions. The nonsensical videos helped the researchers to understand PLATO’S learning process better. When asked to predict what would happen next in the videos, the AI gave a correct prediction for the logical videos and an incorrect prediction for the nonsensical ones.

Given its coding, PLATO learned physics concepts by using an object-centric perspective. According to Piloto, this provides the AI with many advantages.

“If you consider, for instance, all the different scenes that an apple may be in,” he said, “you don’t have to learn about the apple on a tree, versus an apple in your kitchen, versus an apple in your garbage. When you isolate the apple as its own thing, you’re in a better position to generalize how it behaves in new systems, in new contexts. It provides learning efficiency.” Piloto also suggested that this type of learning can help future researchers optimize AI programming and training, saving time and money.

This experiment not only illustrates the feasibility of teaching an AI system physics but also gives scientists further insight into how this system learns. “That means they’re using an architecture that other people probably can’t use,” explained researcher Mark Nixon from the University of Southampton. Other researchers, like Chen Feng from New York University, agree with Piloto about the benefits of AI object-centric learning.

Survival After Death: How a Dead Star is Showing Us the Future of Our Solar System

“This is somewhat like teaching a kid what a car is by first teaching them what wheels and seats are,” Feng stated. “The benefit of using object-centric representation, instead of raw visual inputs, makes AI learn intuitive physical concepts with better data efficiency.”