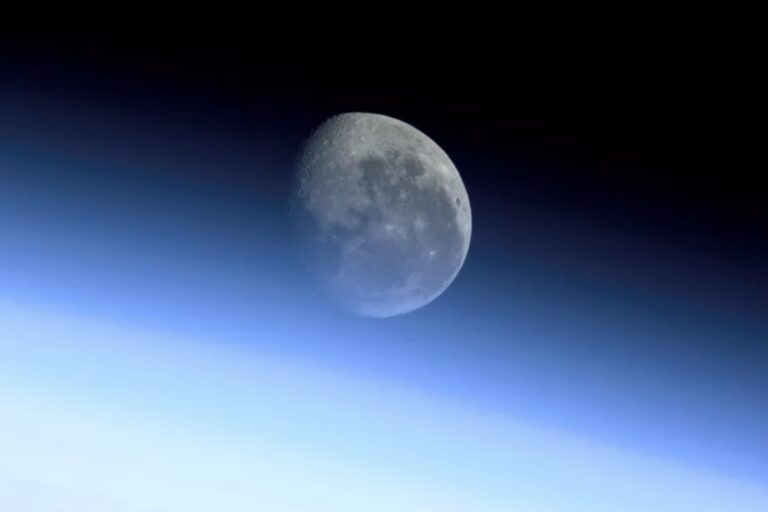 The Bright Side of the Moon

If you wish to know the direction of the Sun at night, consider the Moon as a sphere being illuminated on its side by the Solar lamppost. Even though sunlight is blocked by Earth at nighttime, we can infer the Sun by looking at the Moon.

The distinguished cosmologist Rashid Sunyaev told me that when his Ph.D. mentor, Yakov Zel’dovich, was at the prime of his career, many of Zel’dovich’s students became famous as a result of seminal papers that they wrote with him. But as soon as Zel’dovich passed away, many of these brilliant collaborators stopped writing important papers. Imagine the Moon when the Sun will die.

Consider another example. We infer that dark matter exists from its gravitational influence on ordinary matter in the form of stars, gas, and light. The motion of stars and gas in galaxies, the pressure of hot gas in clusters of galaxies, and the effect of gravitational lensing by all cosmic structures imply dark matter. Similarly, the expansion rate of the Universe suggests that the cosmic mass budget contains five times more matter than ordinary matter.

In a recent email, my former Ph.D. student, Nick Stone, wrote: “I have been working on a project with your former postdoc, Yuval Birnboim, concerning dark matter with a non-trivial interaction, which has been pretty interesting so far.  I suppose this means I am finally following your advice to work on less conservative topics.” I responded: “It looks like you inherited some of my academic DNA after all!”

In the same way that the nearby Moon educates us about the faraway Sun, the laws of physics that we uncovered in laboratories on Earth appear to reflect the Universe at large. This is not a tautology. We could have observed laboratory-measured parameters, like the speed of light, the electron charge, or Newton’s constant, to have different values at different cosmic locations or times. Instead, they are constant to better than a few percent all the way back to 400,000 years after the Big Bang, when the Universe first became transparent.

Finding that the physical laws uncovered in our laboratories reflect the behavior of the Universe at large raises the question of whether sharing fundamental laws imply also sharing phenomena? In particular, is the chemistry of life on Earth replicated on rocky exoplanets with similar surface temperature, water content, and a thin atmosphere on top?

By studying Earth, we may not acquire a good understanding of what lies afar any better than studying the Moon would reveal about the Sun. For example, the composition of the Sun is different from that of Earth, as Cecilia Payne-Gaposchkin first realized through her Ph.D. work in 1925. This was contrary to popular belief at the time, and the director of the Princeton University Observatory, Henry Norris Russell, wrote to her that the findings were “clearly impossible,” only to realize that she was right through his own work four years later.

Similarly, we know that the Universe contains dark matter that was never detected in our laboratories. This brings us full circle to the point that studying the sunlight reflected off the Moon would not reveal the nature of the Sun as a nuclear reactor confined by gravity. For that purpose, we need to study the Sun directly during the daytime, as Cecilia did.

In July 2017, I visited the Daniel K. Inouye Solar Telescope (DKIST) when its 4-meter telescope was being assembled on Haleakalā in Maui, Hawaii. During the tour, the local astronomers were arguing that they will not be getting enough light from the Sun to study it in a desirable detail, echoing the endless nature of the pursuit of scientific knowledge. Within a few years, DKIST delivered amazing high-resolution images of convective cell-like structures, the size of Texas, on the surface of the Sun.

Remote observing is the first step towards scientific knowledge. We get limited information about our neighborhood by looking through our windows. A better approach is to venture into the neighborhood, in the spirit of the Parker Solar Probe plunging into the Solar corona in order to unravel the full scope of its magnetic and energetic particle phenomena.

Octopuses May Have the Rare Ability For Targeted “Throwing,” New Research Suggests

Traveling into interstellar space would require a major investment of time. Before pursuing that, we should examine the objects that enter our Solar system from interstellar space. This research frontier is in its infancy. But we already know that two out of the first three interstellar objects that were discovered since 2014, had surprising properties. Indeed, objects from the street often appear as outliers relative to familiar objects in our backyard.

On April 18, 1955, the day Albert Einstein died, Herb Block drew a famous cartoon of the Earth labeled with the plaque “ALBERT EINSTEIN LIVED HERE.” If Einstein were alive today (at age 143!), he would have been thrilled to see many of the phenomena he theoretically forecasted a century ago being observed in the real Universe, including the cosmological constant, black holes, gravitational waves, and gravitational lensing. He would have been thrilled by these findings, but at the same time – I can imagine him stating: “it is time for us to find something really new about spacetime and gravity that I had not anticipated.”

Given that Einstein is not around anymore to guide our future scientific endeavors, we might seek advice in interstellar space. Most likely, Albert Einstein was not the smartest scientist who ever lived since the Big Bang, 13.8 billion years ago. Learning from a smarter scientist on an exoplanet might help us realize what we need to seek through our telescopes in the next century. Or perhaps we should simply search without knowing?

Here’s hoping for unexpected insights to be garnered through the new Webb telescope, as well as the new telescopes recently constructed for use by the Galileo Project.