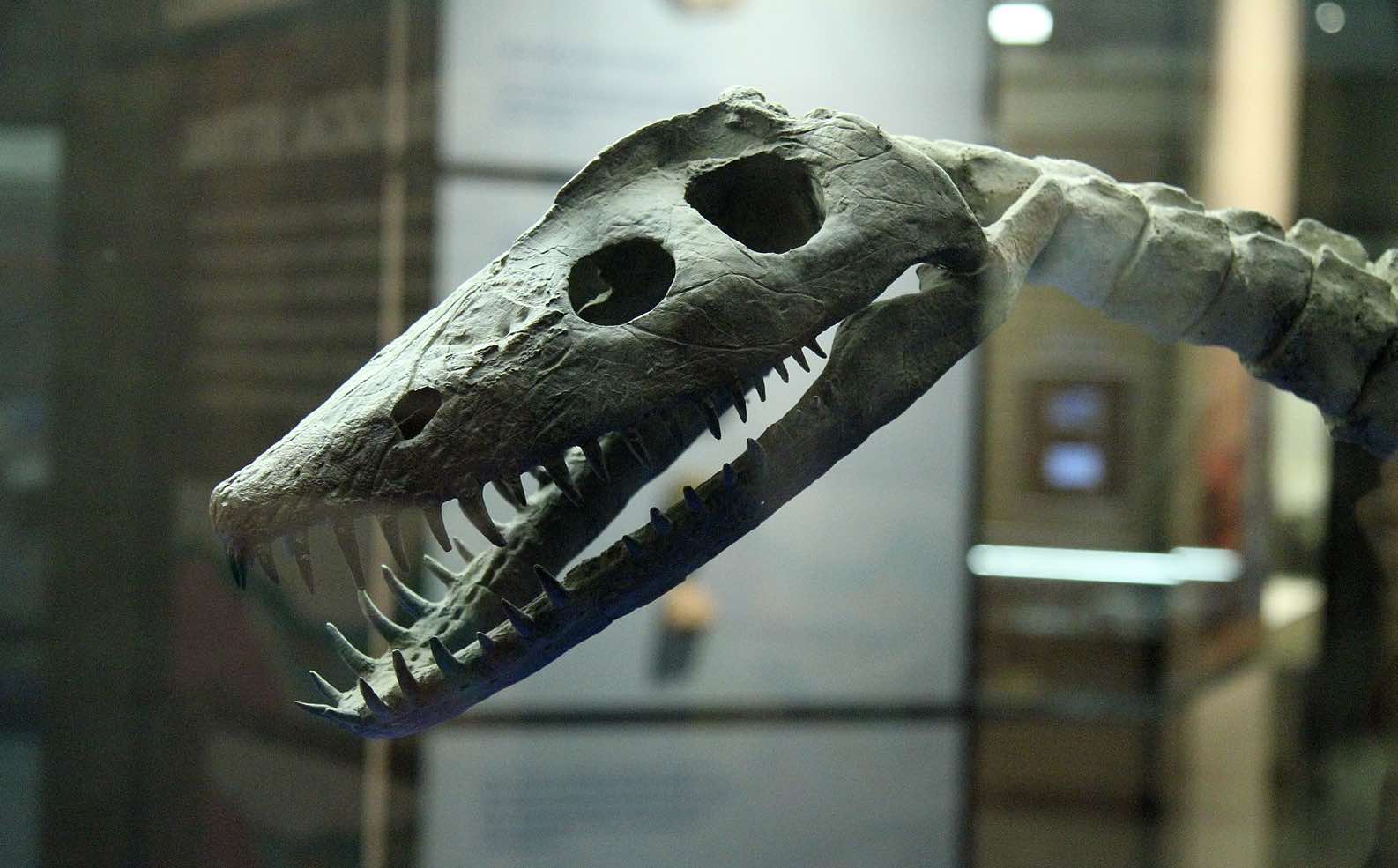 Evidence of an Ancient Sea Monster Just Turned Up in an Unlikely Place, but it Wasn’t Loch Ness

Discovered within a 100-million-year-old river system in a portion of the Sahara Desert located in modern-day Morocco, researchers with the University of Bath have announced the surprise discovery of fossils belonging to plesiosaurs, an ancient variety of long-necked aquatic reptiles.

The discovery appears to lend weight to the idea that this small variety of plesiosaur, once thought to have been exclusively marine reptiles, might have thrived in freshwater areas as well.

The existence of plesiosaurs has been known since 1823, when fossil remains of the creatures were uncovered by Mary Anning, an English fossil collector and early paleontologist who became renowned for such discoveries within fossil beds in Southwestern England along the English Channel near Lyme Regis. Based on such early discoveries, it was long thought that plesiosaurs lived mostly in marine habitats, never straying far from oceans and the abundant food sources they could provide.

Now, according to new research led by Georgina Bunker, a student at the University of Bath, with participation from the University of Portsmouth in the United Kingdom and the Université Hassan II in Morocco, fossil remains of small plesiosaurs recovered from an ancient African river dating back to the Cretaceous age provide evidence that these ancient aquatic reptiles may have dwelt further inland than once thought.

Among the recent fossil discoveries were bones and teeth of adult plesiosaurs, as well as a smaller arm bone that is believed to have belonged to an infant. The fossils appear to show how these ancient long-necked beasts subsisted in shallow river environments alongside several types of creatures still extant today, ranging from frogs and turtles to crocodiles.

Much like river dolphins today, these small plesiosaurs could have lived their entire lives in such a habitat.

Dr. Nick Longrich, one of the paper’s corresponding authors, told The Debrief that while similar discoveries of plesiosaurs in freshwater environments have been made in the past, the recent African discoveries are different because of the fact that several specimens from different animals were all recovered in a single location.

“Plesiosaurs occur in freshwater elsewhere,” Longrich says, “in Canada, in England, in China. It’s known but it’s often just one skeleton, whereas we have a whole bunch of fossils from different animals.”

“It’s also tended to be dismissed as marine animals temporarily entering freshwater,” Longrich says. “Which some of these animals may well be, but we think it’s worth seriously considering that they’re up in these rivers full time, like river dolphins.”

For Longrich, the abundance of plesiosaur fossils all found in one location comes as a wakeup call for paleontologists that have long relegated these ancient reptiles to being exclusively marine dwellers.

Longrich told The Debrief that “we need to take a closer look… for more plesiosaur fossils in rivers, try to figure out what they’re doing there,” noting in particular the significance of teeth recovered during the recent fossil discoveries.

“One of the things we bring up is the teeth,” Longrich says. “[S]hed teeth are more informative than the skeletons in a way, since they’re lost by living animals. So the shed teeth are animals that are living in the rivers for a period of time, not just an animal that got lost and wandered up there (as happens with whales from time to time).”

“We also need to study the tooth chemistry,” Longrich adds, “depending on whether they get water from the sea or the rivers, the chemical composition will vary. So we’re speculating here (which is all part of the scientific process) but eventually we need to do some experiments to test these ideas.”

A recent press release issued by the University of Bath announcing the research pointed to the plesiosaur as being the inspiration behind one of the most famous mythical monsters in the British Isles: Scotland’s famous Loch Ness monster. Due to the comparison, some media outlets have interpreted the recent African fossil discoveries as potentially lending weight to the notion that such a creature actually could exist in a landlocked lake environment like the Loch.

So what does Longrich think about this prospect?

“One aspect of the scenario—freshwater plesiosaurs—is plausible,” he says. “But [Loch Ness is] a tiny lake that couldn’t support a population of animals the size of a plesiosaur. It’s also very recent geologically… 10,000 years ago, it was under ice, a ravine beneath a glacier.”

Legends about water monsters in the Scottish Highlands date back several centuries, with some citing mythical accounts like those which appear in the biography of Saint Columba from around 565 AD as being among the earliest references to a monster akin to the beast popularly associated with Loch Ness.

However, it had been during the 1930s, with the completion of a new roadway along Loch Ness, that sightings of the alleged monster began to become more widespread. In April 1933, a sighting by motorists George Spicer and his wife of some large animal traversing the road a distance ahead of them, which they likened to a “dragon or prehistoric monster,” was among the earliest to bring widespread attention to Scotland’s most famous alleged mystery monster.

For Longrich, although the likelihood of there actually being a Loch Ness monster is slim, he feels that people’s obsession with “Nessie” may nonetheless also have its roots in Africa, much like the recent plesiosaur fossil discoveries.

“I’m not sure why people are so fascinated by Nessie,” Longrich told The Debrief. “I suspect it has to do with evolving in Africa, where along with lions and hyenas in the bushes, you had crocodiles and hippos in the water—the Leviathan and Behemoth of the Bible. These were very dangerous animals, today hippos kill more people than any other animal in Africa.”

“If there’s some instinct in our brain that makes us assume the water holds monsters… well, I can see how we might have evolved to see monsters everywhere,” Longrich says.

As far as the recent fossil discoveries, while they may not point to the existence of an undiscovered creature in Loch Ness, they do present good reasons for paleontologists to be on the lookout for future fossil evidence of plesiosaurs in unlikely places.

“What it does tell us is to keep an eye out for plesiosaurs in other habitats,” Longrich told The Debrief. “These plesiosaurs turned out to be fairly common once we started looking for their fossils. But we just didn’t look for the fossils at first–we assumed there couldn’t be any plesiosaurs in the river.

“My hunch is that they may have repeatedly invaded freshwater habitats, like with river dolphins, which evolved at least five separate times. But that’s just a hunch, we need to actually investigate and figure out just what they’re doing up the rivers,” Longrich says.

Then again, there could be one other possibility worthy of consideration: that these ancient plesiosaurs were just out-of-place animals. That is, they might have become disoriented and found themselves further upstream than they would normally stray.

“Sometimes animals just get lost,” Longrich says. “There’s a beaked whale—these are specialized deep divers, they dive miles into the ocean to suck up squid—from a river deposit in Kenya, 500 miles from the coast. That wasn’t living there, it just got lost.” Longrich also cites as an example a Minke whale that swam 700 miles up the Amazon as a similar example of misplaced animals.

“Almost certainly, some plesiosaurs represent that sort of thing,” Longrich says, “just animals that got lost. But probably not all of them.”

“We just need more research on these problems,” Longrich says.

The recent study by lead author Georgina Bunker, of which Longrich was a coauthor, was published in the journal Cretaceous Research.