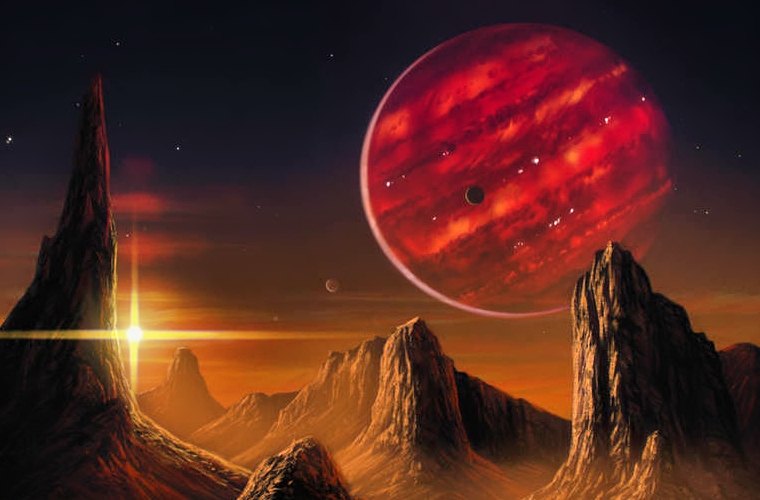 A team of researchers from the Space Telescope Science Institute in Maryland have developed a novel technique to examine the atmospheres of brown dwarfs, also known as “failed stars,” with hopes of shedding some light on gas giant planetary atmospheres.

Since locating the first gas giant exoplanets, astronomers have searched for ways to explore their atmospheres against the massive glare of their host suns. Improvements in current telescopes, soon-to-be-launched space telescopes, and better analysis tools may one day solve this problem. While we wait for the technology to catch up, this new technique offers a solid temporary solution.

“We don’t have the ability yet with current technology to analyze in detail the atmosphere of Beta Pictoris b,” said Elena Manjavacas, the head of the institute’s team when describing a gas exoplanet that is 13x as massive as Jupiter. “So, we’re using our study of this brown dwarf’s atmosphere as a proxy to get an idea of what the exoplanet’s clouds might look like at different heights of its atmosphere.”

Background: What are ‘Failed Stars?’

Since discovering the first planet outside our solar system, astronomers have continued to look for methods to better understand the over 4,000 such exoplanets spotted thus far. The James Webb telescope, scheduled for launch in November of this year, is already tasked with searching the atmosphere of rocky, Earth-like planets for biosignatures (signs of life). Still, they are not the only atmospheres these researchers hope to understand.

Instead, some astronomers are studying gas giants, much like our own Jupiter, only often many times more massive, in hopes of understanding how they formed, as well as their current chemical makeup. Unfortunately, this has been extremely difficult since most data about these exoplanets is lost among the radiation pouring off of their host stars. This limitation has forced astronomers studying these gas giants to get creative, with their latest solution zeroing in on a class of failed stars known as brown dwarfs.

Known as “failed stars,” brown dwarfs are similar to gas giants but often significantly larger. They are also remarkably similar to a star in their early life but lack enough mass and heat to maintain nuclear fusion like a star does. Also, unlike planets that form around a host star, brown dwarfs typically form in isolation, making them easier to image without a host star muting the signal. Some of the younger ones even offer enough light and radiation for researchers to study them much more closely than gas giants, with their makeup hopefully offering a legitimate analogue to this class of planet.

To conduct their own analysis of a failed star, in this case, a free-floating brown dwarf known as 2MASS J22081363+2921215, which is part of a flock of stars and sub-stellar objects called the Beta Pictoris moving group located roughly 115 light-years away, Dr. Manjavacas and her team booked time on the Keck Observatory in Maunakea, Hawaii, a land-based observatory powerful enough to scan their intended target directly.

“The only way to do this from the ground is by using Keck’s high-resolution (Multi-Object Spectrograph for Infrared) MOSFIRE instrument because it allows us to observe multiple stars simultaneously with our brown dwarf,” said Manjavacas, who was also a former staff member at the Keck observatory. “This allows us to correct for the contamination introduced by the Earth’s atmosphere and measure the true signal from the brown dwarf with good precision.”

With the observatory pointed at their target for two and a half hours, the team used MOSFIRE, which scans objects in the near-infrared spectrum, to capture and analyze the colors and brightness variations in the brown dwarf’s atmosphere. That same tool also analyzed the spectral fingerprints of various chemical elements in the atmosphere, noting how they changed with time.

Upon analyzing their results, which are scheduled to be published in The Astronomical Journal, the research team found that the data suggested the brown dwarf has a mottled atmosphere of scattered clouds, with the press release noting that it resembled “a carved Halloween pumpkin, with light escaping from the hot interior.”

“[T]hese observations are a proof-of-concept that MOSFIRE can do these types of studies of brown dwarf atmospheres,” said Manjavacas, in celebration of the high-quality data captured by the MOSFIRE instrument.

Outlook: How do we study Exoplanets?

In that same press release, Manjavacas says that the plan is to use MOSFIRE to study other atmospheres of brown dwarfs and compare them to those of gas giants. However, she also notes that yet-to-be-launched telescopes such as James Webb will provide even more information about a brown dwarf’s atmosphere.

“JWST will give us the structure of the entire atmosphere, providing more coverage than any other telescope,” Manjavacas said.

She also said she hopes MOSFIRE can be used in tandem with James Webb to sample a broader range of brown dwarfs and hopes to gain a better understanding of many other gas giant exoplanets.

“Exoplanets are so much more diverse than what we see locally in the solar system,” said Keck Observatory Chief Scientist John O’Meara. “It’s work like this, and future work with Keck and JWST, that will give us a fuller picture of the diversity of planets orbiting other stars.”