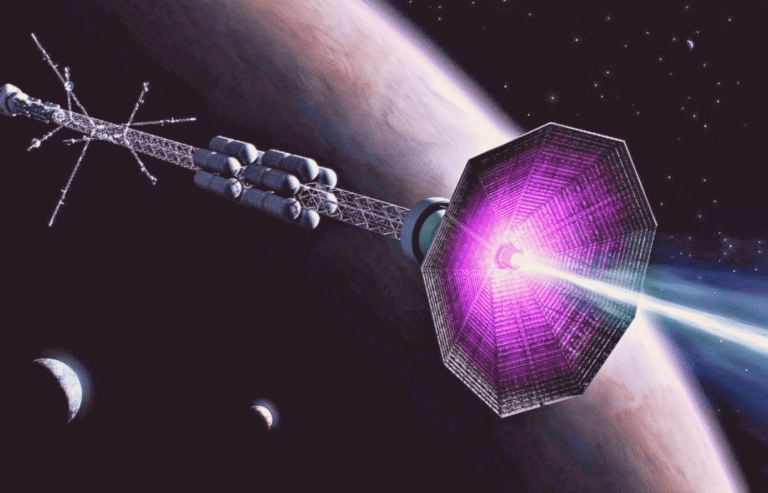 BACKGROUND: The Problem with Traditional Propulsion

Getting objects into space requires a lot of energy. Traditional chemical rockets produce a lot of thrust but only for a short time. Electric ion-based systems can provide months of thrust, but they can only produce a small amount of thrust. It can take a very long time to build up speed.

Dr. Ebrahimi’s concept attempts to combine the best of both worlds.

ANALYSIS: Plasma Propulsion May Be The Answer

“My new plasmoid thruster is complementary to existing thruster technology,” Dr. Ebrahimi told The Debrief. “It is unique in being able to deliver high thrust at high and variable exhaust velocity (tens to hundreds of km/s). It should therefore get unsurpassed gas mileage for longer trips (Mars and beyond).”

Her concept is based upon the magnetism present in solar flares. In simple terms, charged plasma is emitted containing strong magnetic fields. The plasma converges, then separates, then merges again. This back and forth transfer creates thermal and kinetic energy and can give any object using this theoretical propulsion system one helluva kick.

“The idea for this thruster comes from my simulations of helicity injection in the [National Spherical Torus Experiment] NSTX fusion experiment in Princeton, a technique used to create the initial plasma current in a Tokamak [fusion reactor]. My simulations showed these plasma rings called plasmoids are being created and moving at very high speed,” Dr. Ebrahimi explained.

According to computer simulations run by the Princeton Plasma Physics Laboratory and the National Energy Research Scientific Computing Center at the Lawrence Berkeley National Laboratory in Berkeley, California, her thruster concept produced exhaust velocities that are ten times greater than a traditional ion propulsion system with heart-stopping speeds at hundreds of kilometers per second.

OUTLOOK: The Future of Plasma Propulsion

If used, Dr. Ebrahimi’s propulsion system could have astronauts reaching the outer planets of our solar system much more quickly.

Moreover, since the system relies on magnetic fields, the crew could adjust their speed by increasing or decreasing the magnetic field generated by the engine, thereby altering the plasma exhaust’s convergence/re-convergence cycle.

In theory, the initial acceleration at the starting leg of the trip would send the vehicle ripping through space. Then, to conserve energy, the crew could reduce thrust and let the frictionless vacuum of space do the work until they needed another boost.

“The vision is that it will help make it practical and economical to move payloads in space between orbits around Earth, Moon, and Mars and the asteroid belt,” Dr. Ebrahimi told The Debrief. Ultimately, the trip becomes faster, and you use less fuel—horsepower and gas mileage in space.