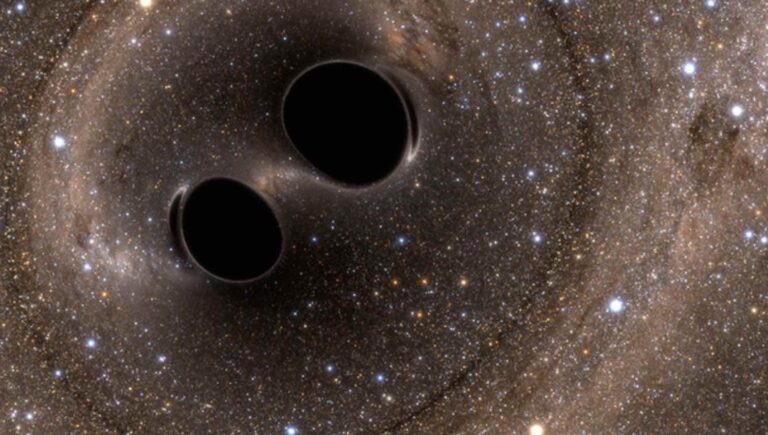 In our daily life, we measure space with yardsticks and time with clocks. This gives us the illusion that space and time are absolute. With that mindset, Isaac Newton, the son of a farmer who stayed at home during a bubonic plague, ponderedwhy apples in his family’s orchard fell straight to the ground and suggested in 1687 that gravity is a force between any two objects.

A century before Newton’s realization, Galileo Galilei concluded that the gravitational acceleration of a body would be independent of its mass, contrary to Aristotle’s assertion that heavy objects fall faster than the lighter ones. Indeed, during the Apollo 15 mission to the Moon in 1971, the astronaut David Scott dropped a feather and a hammer from his hands and the two hit the ground at the same time because of the lack of a lunar atmosphere.

Three centuries after Galileo, Albert Einstein came up with the thought experiment that people in a free-falling elevator would have no sense of gravity because their feet would not press against the floor of the elevator, since their feet and the floor are falling at the same rate. This led him to recognize in 1907 that gravity is not a force but rather an acceleration of the reference frame shared by all objects, irrespective of mass or composition – the so-called equivalence principle. If so, Einstein reasoned, gravity must be a distortion of space and time, shared by all objects.

In November 1915, Einstein formulated the equations that describe how spacetime is curved by matter and how the curvature of spacetime dictates the motion of matter. The curvature of a surface can be inferred from the sum of the angles of a triangle on it. Whereas 180 degrees is the sum of the three triangle angles on a flat surface, this is the sum of just the two base angles for a triangle drawn on the surface of a sphere, like the Earth, with the base lying on the equator and the two sides meeting at the north pole.

A simple way to visualize the curvature of spacetime is to consider a two-dimensional analog to the three-dimensional space we inhabit. Consider a bowling bowl resting at the center of a trampoline made of rubber and curving its flexible surface. If we kick a marble at the right speed around the center, it will follow a circle because of the curvature of the trampoline surface. But if we were to remove the bowling bowl and give the marble the same kick, it would move along a straight line on the flat surface. For the same reason, if we were to remove the Sun instantly from the Solar system, the Earth would fly out along a straight line because the local spacetime would become flat.

Now imagine moving the bowling ball back and forth periodically. This would inevitably produce ripples in the rubber surface of the trampoline, propagating out like a wave generated by a stick moved back and forth on the surface of a pond. In the same way, a companion star moving the Sun back and forth, would generate ripples in spacetime called gravitational waves. These waves interact so weakly with matter that they cannot be damped anywhere in the Universe, as I had shown in a recent paper.

In August 2015, a century minus two months after Einstein’s equations were formulated, the LIGO experiment detected the first signal from gravitational waves from the collision of two black holes at the edge of the Universe. This opened a new window for observing the Universe.

By now, seven years and nearly a hundred additional event signals after LIGO’s pioneering discovery, astronomers celebrate a new frontier of gravitational wave astrophysics. On the one hand, our ability to explain all the signals as mergers of black holes or neutron stars is rewarding. But at the same time, the lack of unexpected sources is disappointing.

For example, we could have identified bursts of gravitational waves from topological defects of spacetime, called cosmic strings, which are hypothesized to be generated by symmetry-breaking phase transitions in the early universe.  We could have also detected artificially-produced bursts of gravitational waves, used for communication among advanced technological civilizations.

But perhaps we will find these unusual signals with the future generations of gravitational wave detectors. A novel detection scheme, the Pulsar Timing Arrays (PTAs), uses pulsars as distributed clocks to detect the passage of a low-frequency gravitational wave from the mergers of massive black holes at the centers of galaxies.

With my former postdoc, Dan D’Orazio, we showed in a recent paper that PTAs could potentially be used as a new method for calibrating cosmological distances and measuring the Hubble expansion rate through gravitational-wave parallax. The principle is familiar. Darwinian survival selected animals with two eyes since they were able to assess the distance of threatening objects by viewing them from two directions.  For the same reason, having an array of pulsars allows us to identify the distance of a cosmological source of gravitational waves.

In an even more recent paper with Hamsa Padmanabhan, we showed that PTAs can unravel the formation history of the first supermassive black holes in the first billion years after the Big Bang. This data will complement the deep images of galaxies during that epoch, obtained by the Webb telescope.

The latest advances in our understanding of the cosmos stem from developing technologies that make the invisible more easily detectable. Humanity follows a steady progression towards extending the limits of our biological senses with technological devices that probe our cosmic neighborhood more effectively. Technological extensions of our body make the invisible detectable.

This work is not done.  We still have to find the nature of dark matter and dark energy as well as the nature of singularities, like those in black holes and the Big Bang. Singularities are points where the curvature of spacetime diverges and Einstein’s equations break down.

A brilliant scientist has yet to formulate an extension of Einstein’s equations that incorporates quantum mechanics and explains away the singularity of the Big Bang. Thought experiments might not be sufficient. Here’s hoping that the clues for how to move forward will be encoded in gravitational waves from the early universe, the equivalent of the falling apples in Newton’s orchard.