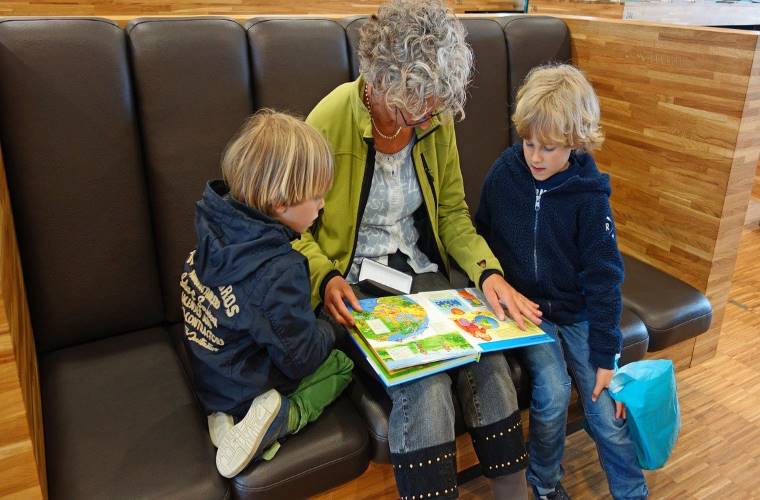 Grandmas Really Are The Best Finally Proven By Science

Grandmas really are the best! And scientists were able to prove it by scanning the brains of grandmothers while they were viewing pictures of their grandchildren. Unsurprisingly to anyone fortunate enough to have had a good relationship with one or more of their grandmothers, those MRI results revealed that grandmothers appear to feel what their grandchildren feel in a particularly emotional way and could be evolutionarily hardwired to empathize with their children’s children.

BACKGROUND: EVERYONE KNOWS GRANDMAS REALLY ARE THE BEST

“We often assume that fathers are the most important caregivers next to mothers, but that’s not always true,” said Rilling. “In some cases, grandmothers are the primary helper.”

“Here, we’re highlighting the brain functions of grandmothers that may play an important role in our social lives and development,” added Minwoo Lee, a Ph.D. candidate in Emory’s Department of Anthropology and one of the study’s co-authors. “It’s an important aspect of the human experience that has been largely left out of the field of neuroscience.”

Published in the Proceedings of the Royal Society B Biological Sciences, the Emory study asked 50 grandmothers to fill out questionnaires related to their experiences being grandmothers. This included how much time they spent with their grandchildren, what types of activities they participated in when together, and how much affection they feel for their grandchildren.

Next, the participants were shown pictures of their grandchildren while undergoing a functional MRI. This allowed researchers to look at the activity in various regions of the brain to determine how the women were feeling when viewing the pictures. As controls, the grandmothers were also shown pictures of children they did not know, the same sex parent of their grandchild, and a picture of another adult they did not know.

When analyzing the results of the brain scans, the research team found that most participants showed elevated levels of brain activity in areas associated with emotional empathy and motivation, especially when compared to the scans recorded when they were viewing the other pictures. In short, the grandmothers “felt” what they perceived their grandchildren to be feeling in a deeper, more emotional way.

“Our results add to the evidence that there does seem to be a global parenting caregiving system in the brain,” said Rilling, “and that grandmothers’ responses to their grandchildren maps onto it.”

Interestingly, the team found that whenever the grandmothers were looking at pictures of their own adult child, they experienced more brain activity in regions connected with something called “cognitive empathy.” Basically, this indicated that the grandmothers also empathized with their adult children, but in less of an emotional way and more of an intellectual way, as if they were trying to understand what (the heck) their child is thinking.

“Young children have likely evolved traits to be able to manipulate not just the maternal brain, but the grand maternal brain,” said Rilling. “An adult child doesn’t have the same cute ‘factor,’ so they may not elicit the same emotional response.”

OUTLOOK: HOW ABOUT GRANDPAS?


Farming Robots Are Our Future. Will it be a Utopia or an Agricultural Dystopia?

The study authors, which also included former Emory research specialist Amber Gonzalez, said that for the majority of the grandmothers, trying not to interfere with their grandchildren’s parents was their biggest challenge, especially when they disagreed with how the grandchildren were being raised. However, the majority of the study participants indicated that the role of grandmother was a nice change from that of a parent.

“Many of them also said how nice it is to not be under as much time and financial pressure as they were when raising their children,” said Rilling. “They get to enjoy the experience of being a grandmother much more than they did being parents.”

As for what they might tackle next, the Emory team did point to another area of family relationships that they say has also seen little research.

“It would be interesting to also look at the neuroscience of grandfathers and how the brain functions of grandparents may differ across cultures,” said Lee.