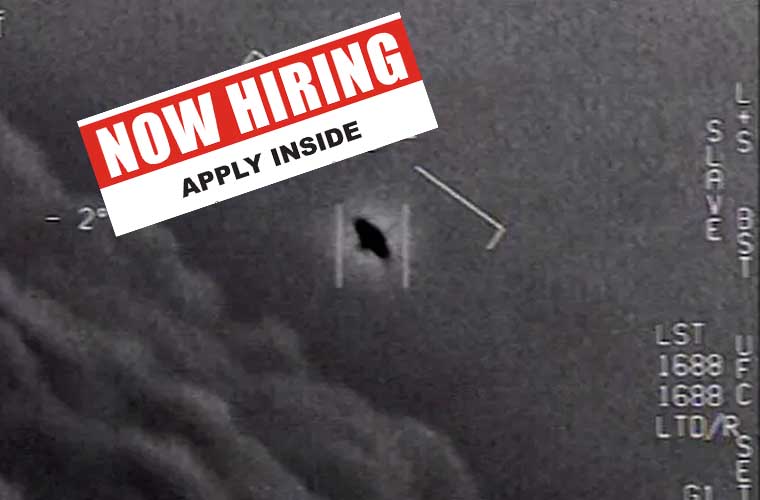 Do you have a defiant curiosity for the mysterious and a yearning to investigate “Unidentified Aerial Phenomena” (UAP), more commonly known as UFOs?

If so, the Office of the U.S Director for National Intelligence (ODNI) might have had the perfect job for you.

According to the postings, the Senior Analysis Lead and Collection Lead will “synchronize intelligence analysis and reporting on behalf of the Director of the Airborne Object Identification and Management Synchronization Group (AOIMSG).” The roles will also ensure the coordination across multiple government agencies, “with regard to Unidentified Aerial Phenomena reporting and analysis.”

The job openings come as part of the government’s attempt to take the issue of unexplained and mysterious objects seen flying around military airspace more seriously.

However, unfortunately, if you’re not already working in the U.S. Intelligence Community and holding an active Top Secret//SCI clearance, you need not apply. Even then, you might be too late.

In November 2022, the Department of Defense announced the establishment of AOIMSG, serving as a verbosely titled successor to the Navy’s Unidentified Aerial Phenomena Task Force (UAPTF).

The announcement of a permanent UAP investigative body coincided with a memo by Deputy Secretary of Defense Kathleen Hicks outlining the potential flight safety risk posed by UAP and the need for standardized reporting on UAP incidents.

The establishment of AOIMSG also served as an attempt to get ahead of legislation earlier proposed by Senators Kirsten Gillibrand (D-NY) and Marco Rubio (R-FL) titled “Establishment of Structure and Authorities to Address Unidentified Aerial Phenomena.” In addition to outlining measures the DoD should take to investigate UAP, the proposed Bill ordered the establishment of a permanent “Anomaly Surveillance and Resolution Office.”

In December, a slightly watered-down version of the Gillibrand-Rubio amendment was passed as part of the FY 2022 National Defense Authorization Act. And for the first time in history, the investigation of UAP or UFOs became a matter of federally mandated law.

According to ODNI, the senior analyst and collection lead positions will help synchronize AOIMSG’s analytic efforts with key members of the DoD, Defense Intelligence Enterprise (DIE), and the Intelligence Community (IC).

The positions will also “establish processes and procedures to ensure that reported anomalous objects are analyzed by subject matter experts in appropriate intelligence disciplines.”

To meet the minimum qualifications for either position, an applicant must have “an academic and/or work history grounded in intelligence, intelligence-related activities, and functional areas with an emphasis on all-source data analysis and associated tools,” along with “subject matter expertise in intelligence analysis standards, all-source analysis, and intelligence production.”

Both roles are listed as GG/GS-15 positions, which is the highest General Schedule pay grade for civilian federal employees, just below the high-ranking civil service positions of the Senior Executive Service (SES). In established DoD order of government, the GS-15 position is equivalent to the military rank of Colonel, with a base salary between $112,890 to $146,757 annually.

Applicants must have an active Top Secret/Sensitive Compartmented Information (SCI) clearance to be eligible.

Assuredly, there are many avocation UAP investigators and UFO enthusiasts who would likely jump at the opportunity to join the government’s formal UAP investigations group. The majority of whom have been saying for decades that the topic of UAP needed to be taken seriously.

Don’t Think About It: How Does Our Brain Control Unwanted Thoughts?

Unfortunately, however, the current job vacancies to join AOIMSG are listed as part of ODNI’s Joint Duty Program and only open to individuals already working at one of the 17 federal agencies of the U.S. Intelligence Community.

Established in 2004, the Joint Duty Program works to foster cross-agency expertise and interagency cooperation by allowing members of the intelligence community to serve in temporary rotational assignments with other agencies or programs that fall under ODNI.

According to the announcement, the tour length with AOIMSG for either position would be set at 24 months.

Even if you are an interested intelligence community member, you still might be out of luck. According to the job postings, the closing date to apply for either position ended on April 15, 2022. Moreover, the vacancy announcement lists the start date for the jobs as 4/26/2022.

However, ODNI policy says a candidate’s parent agency must approve the temporary duty assignment, and both jobs are still listed as “Joint Duty Rotational Assignment” vacancies on the DNI’s website. So perhaps, all might not be lost.

According to a recent report by Politico, after members of the Senate Intelligence and Armed Services committees received their first congressionally mandated briefing, lawmakers were reportedly less than pleased with the DoD’s efforts to examine UAP incidents.

So who knows. Perhaps, with continued pressure from Congress, some more vacancies at the DoD’s UAP investigative office could be on the horizon.