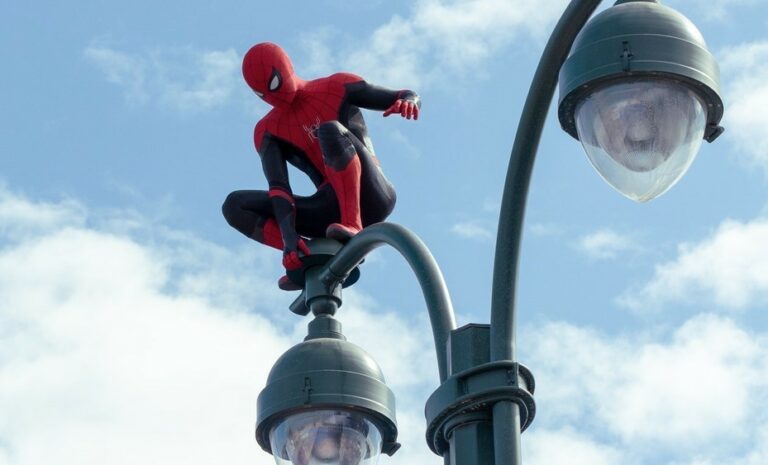 Spider-Man perched atop a light in Columbia Pictures' SPIDER-MAN: NO WAY HOME.


The Key May Lie in Sensing Vibrations

In the comics, Spider-Man possesses something called ‘Spidey Sense,’ which one website describes as “an extraordinary ability to sense imminent danger.” Now, research into the ability of spiders to detect sound waves using their webs seems to indicate that an arachnid’s ability to sense movement even from a distance may be a real thing after all. And unlike human or animal hearing which senses pressure changes and vibrations using eardrums, this particular ‘spidey sense’ may completely redefine how we understand the ability to detect even the minutest of vibrations.

SPIDERS DON’T HAVE EARDRUMS BUT STILL MIGHT HEAR YOU COMING

“Everyone knows that humans and most other vertebrate species hear using eardrums that turn soundwave pressure into signals for our brains,” explains the press release announcing the recently published research. “But what about smaller animals like insects and arthropods? Can they detect sounds? And if so, how?”

Study author Professor Ron Miles from Binghamton University’s Department of Engineering has worked on this specific question for three decades. This quest led the professor to the orb-weaving spider, a common type of spider famous in the children’s book Charlotte’s Web. And based on what he and fellow researcher Ron Hoy, a biology professor from Cornell, found, this creature’s real-world ‘spidey sense’ may completely redefine the way we understand the detection of vibrations.

After collecting orb-weaving spiders from around campus, the research team encouraged the spiders to build webs within rectangular frames so they could be moved about. These framed webs were placed in Binghamton University’s anechoic chamber, an underground soundproof room, so the team could isolate and manipulate the speakers and the webs independently.

First, the team began by using “pure tone” speakers placed 3 meters away from the webs. According to the release, “they found spiders can respond to sound levels as low as 68 decibels.” For reference, 68db is considered a normal conversation level and not a loud or damaging sound level.

Next, researchers placed the webs at a 45% angle to the speakers, changing both the sound’s source and direction. Shockingly the spiders figured it out instantly.

“Not only are the spiders localizing the sound source,” the release explains, “but they can tell the sound incoming direction with 100% accuracy.”

“It is well-known that spiders respond when something vibrates their webs, such as potential prey,” the same release explains. “In these new experiments, researchers for the first time show that spiders turned, crouched or flattened out in response to sounds in the air.”

To better understand what they were witnessing, the researchers used laser vibrometry to measure the exact intensity of the vibrations striking the webs at over 1,000 separate locations. These readings confirmed that the web was moving in conjunction with the sound waves “almost at maximum physical efficiency across an ultra-wide frequency range.”

Specifically, the research showed that the web’s sound waves retained their strength as they propagated throughout the web until reaching the spider itself. “The sound level was still at around 68 decibels when it reached the spider,” the release explains.

“Of course, the real question is, if the web is moving like that, does the spider hear using it?” asked Miles. “That’s a hard question to answer.”

Four of the twelve spiders moved in their experiments, seemingly indicating they were indeed “sensing” the sound even without conventional hearing. “Those reactions proved that the spiders could hear through the webs,” the release explains.

The researchers note that their research only focused on this particular spider and is not necessarily applicable to all spiders. However, they did identify one particular finding from their study that could benefit from more analysis.

“By crouching and stretching, spiders may be changing the tension of the silk strands, thereby tuning them to pick up different frequencies,” the release explains. “By using this external structure to hear, the spider could be able to customize it to hear different sorts of sounds.”

So, the next time Spider-Man seems to move his head just in time to avoid an incoming punch he couldn’t have possibly seen coming, remember the main conclusion of this study: “The spiders are using their webs as extended auditory arrays to capture sounds, possibly giving spiders advanced warning of incoming prey or predators.”