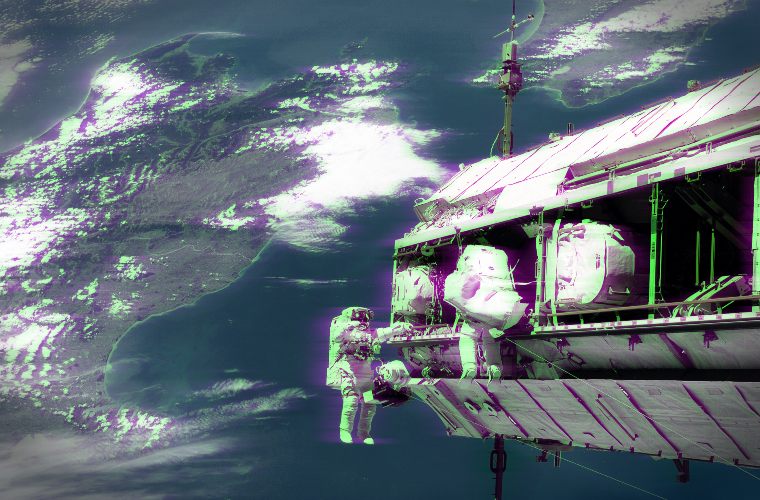 One of the Russian-built thrusters currently operating aboard the ISS (Image Credit: NASA)


The ISS is falling apart due to age and tech glitches. The Debrief explores the last 5 major incidents aboard the space station.

The Soyuz MS-18 spacecraft fired its thrusters in a planned pre-departure test on October 15th. However, the thruster firing continued after the test was over, provoking a loss of attitude control for the ISS and briefly tilting it.

Abord this spacecraft were cosmonaut Oleg Novitskiy, film director Klim Shipenko, and actor Yulia Peresild, scheduled to return to Earth this past Sunday.

On October 15th, at 5:02 AM (EDT), the Russian Soyuz MS-18 spacecraft fired up its thrusters in a planned test before its departure. However, they managed to continue working on their own, even after the test was over.

“The thruster firing unexpectedly continued after the end of the test window, resulting in a loss of attitude control for the International Space Station at 5:13 AM,” NASA officials wrote in an update.

The ISS was pushed away from regular orientation by 57 degrees, which resulted in a loss of attitude control. However, control was regained not long after, and the situation stabilized.

“Within 30 minutes, flight controllers regained attitude control of the space station, which is now in a stable configuration,” they added. “The crew was awake at the time of the event and was not in any danger.”

It is currently unknown why the thrusters fired for a longer duration. The fact that the thrusters stopped firing on their own also poses a mystery. However, NASA and Roscosmos (Russia’s federal space agency) are looking into the situation.

NASA’s flight director even has his own theory as to why the thrusters shut down. According to The New York Times, he said: “We think — and we haven’t got confirmation — we think the thrusters stopped firing because they reached their prop[ellant] limit”. He added that “Moscow is checking into it and doing their data analysis.”

This isn’t the first time a Russian spacecraft was involved in an unexpected thruster incident that could potentially put the ISS in danger. A similar accident occurred less than three months ago, leading us to question what kind of hazards the ISS actually faces and how many times it has been in real danger.

The International Space Station has allowed people to live in space since the first crew arrived in 2000. It allowed us to have an ongoing presence in Earth’s orbit and granted us the opportunity to conduct important space research that could benefit people on Earth and facilitate further space exploration.

Many different dangers surround the ISS constantly. Radiation, fire, space junk, and debris are only a few of them. Even though no fatalities ever occurred on the space station, astronauts have had their fair share of worrying moments.

The Top 5 “Houston, We Have a Problem…” Events on the ISS

A small puncture hole found in one of the Russian Soyuz capsules caused a loss in cabin pressure. While not an immediate cause for caution at the moment, uncontrolled depressurization could lead to many worrying consequences, from equipment malfunction to hypoxia on crew members.

The causes that led to the appearance of the hole are still unknown. At the time, experts debated whether it was caused by a micrometeoroid impact, a production error, or a technician that might’ve drilled it by accident (or not).

An oxygen supply system failed on the Russian Zvezda module. Even though a second system operating normally compensated for the failure of the first one, and no crew member was actually in danger, the lack of oxygen in space is not something to take lightly.

Veteran Russian cosmonaut Gennady Padalka, who holds the world record for most days spent in space, recognizes that the equipment aboard the ISS is well past its utility date. “All modules of the Russian segment are exhausted,” she said. The equipment should’ve been used for 15 years only, but it is now over 20 years old, which eventually might threaten the security of the crew and the ISS.

A routine inspection revealed that a piece of orbiting debris punched a five-millimeter-wide hole in Canadarm2. The Canadian robotic arm conducts regular maintenance checks and operations outside of the ISS, like moving supplies, equipment and even performing “cosmic catches” of visiting vehicles.

Fortunately, no vital damage was done to the arm’s components, and only the thermal covering was affected. However, it is still a reminder of the danger that space debris poses to astronauts. Since 1999, the ISS has had to perform over 20 maneuvers to avoid colliding with space junk.

Russia’s Nauka laboratory module unexpectedly fired its thrusters as it arrived at the ISS, pushing the entire space station off-axis. The station tilted for a while but managed to regain control of its attitude by activating thrusters on another module.

Initially, Nasa reported that the station had rotated 45 degrees, but Zebulon Scoville, a NASA flight director, corrected that statement in a New York Times interview. Apparently, the space station spun 540 degrees, going around one and a half times before stopping upside down.

NASA defines this type of situation as “an anomalous state” that could’ve potentially resulted in the loss of the entire space station if it persisted. The mission’s flight director had to declare it a spacecraft emergency, and communications were lost twice during the disruption. However, the crew didn’t feel immediate danger, and evacuation methods were in place should they need them.

The Nauka research module is now operating normally, and the reasons behind the thrusters’ malfunction were traced to a software glitch.

Russian cosmonauts have discovered some cracks on the Zarya module. Although they’re not too concerning at the moment, they might still present a significant threat as they could spread at any time, causing potential leak sites. Former NASA astronaut, Bill Shepherd, warns that there are probably other cracks that have yet to be found.

The reasons that caused the fissures to appear are unknown; however, the International Space Station is getting old. The cracks are only the latest of various issues that have been occurring in the modules.

Broken toilets, mysterious temperatures fluctuations, and oxygen supply system failures are just some of the problems the ISS has been facing lately.

When is the ISS Up for Retirement?

The ISS is incredibly safe, but astronauts constantly face more dangers than one might consider. Radiation hazards, the chance of drifting away during a spacewalk, being hit by orbital debris, docking spacecraft, and dealing with high-velocity shrapnel are some of the constant hazards surrounding the space station and the astronauts that live in it.

Of course, the station and the astronauts are prepared to deal with these situations, but accidents can always happen. Some of the more recent issues appear to be related to the space station’s age and that most of its equipment has surpassed its use-by date by over five years. For 20 consecutive years, the ISS has hosted hundreds of astronauts, and it is expected to retire in 2024.

The two incidents involving Russian modules’ thrusters to fire unexpectedly this year pose a mystery to NASA and Roscosmos, who continue to investigate the possible causes. Roscosmos officials stated that a software glitch supposedly caused the event in July 2021.

“Due to a short-term software failure, a direct command was mistakenly implemented to turn on the module’s engines for withdrawal, which led to some modification of the orientation of the complex as a whole,” they said.

For the latest incident, there’s still a collaboration between NASA and Russia to discover the source of the problem. The data on the attitude change is also being studied to prevent the same thing from happening in the future.

Despite all of the commotion, the Soyuz MS-18 module still managed to return to Earth last Sunday, as expected. It safely returned Novitskiy, Shipenko, and Peresild from orbit. Novitskiy was on the ISS for six months, but the other two returned after 12 days. Shipenko and Peresild launched to film part of a Russian movie called “Challenge” on the space station.

One day, the International Space Station’s time will come. Whether humans retire it or the dangers in space do, sooner or later, the space lab will fail. So what is next?

Phil McAlister, director of commercial spaceflight development at NASA says: “It’s time for NASA to start setting its sights toward deep space exploration and letting entrepreneurs move in behind us.” A huge chunk of NASA’s annual budget is spent on ISS maintenance. By counting on private corporations to build and operate new (needed) space stations, NASA would be free to invest in pushing humans into deeper space.

Michael Suffredini, CEO of Axiom Space, imagines a future where low earth orbit will be filled with space stations that host professional astronauts and their families. “We want to head toward this place where we’re really settling low earth orbit,” Suffredini says. “The evolution from exploration to settling is what has to happen for humanity to take the next great step and permanently live off the planet. That’s the long-term vision of what we’re doing.”