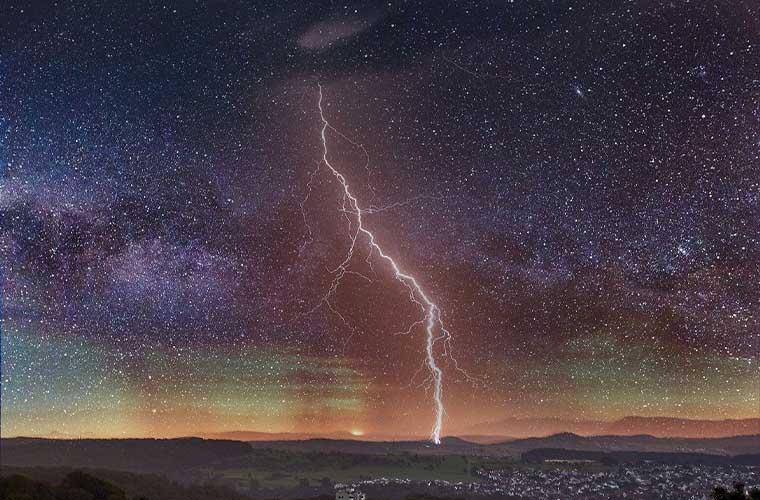 Lightning Sparked the Origin of Life, According To Recent Study

Could lightning be responsible for the origin of life on Earth? According to a new study published by researchers at Yale and the University of Leeds, yes.

In their study, published today in the journal Nature Communications, researchers contend that over billions of years, up to a quintillion lightning strikes is what unlocked usable phosphorus and ultimately sparked the creation of life on planet Earth.

“This work helps us understand how life may have formed on Earth and how it could still be forming on other, Earth-like planets,” said lead author Benjamin Hess, a graduate student in Yale’s Department of Earth & Planetary Sciences, in a press release issued today by Yale.

The origin of life has been one of humanity’s most enduring mysteries.

Throughout history, theologians, philosophers, and scientists have all applied their respective tradecrafts to explain how life could have suddenly emerged billions of years ago on such an inhospitable early Earth.

Since the 1980s, the popular scientific view is that life erupted during a hypothetical “RNA world” stage in evolutionary history. Under this theory, scientists propose self-replicating RNA molecules set the stage for the evolution of DNA and proteins, which produced the necessary chemical reactions for the development of life.

Recently, The Debrief published a study conducted by a team of American and Japanese scientists who announced they had discovered an organic molecule critical to the development of life within meteorite samples. These results give credence to the panspermia theory or the hypothesis that the building blocks for life on Earth have extraterrestrial origins.

The theory of panspermia, however, only answers a piece of the puzzle. The other lingering question is how did conditions on Earth 3.8 to 4.1 billion years ago change from incredibly inhospitable to even unicellular life to suddenly becoming a homeworld ripe for the evolution of complex multicellular organisms.

One of the keys to answering how Earth went from being hostile to hospital rests on the sudden emergence of usable phosphorus gas. Phosphorus was tightly locked billions of years ago within insoluble minerals on Earth’s surface. Yet, usable phosphorus – an essential component for all life and a necessary ingredient for creating DNA, RNA, and other critical biomolecules – was scarce.

Under the premise of panspermia, scientists have examined the possibility that meteorites containing the phosphorus mineral schreibersite may account for the emergence of usable phosphorus on Earth.

The biggest problem with this extraterrestrial origin hypothesis for Earthly phosphorus is that when life is believed to have emerged, roughly 3.5 to 4.5 billion years ago, meteorite impacts are thought to have been relatively low. “The early bombardment is a once in a solar system event. As planets reach their mass, the delivery of more phosphorus from meteors becomes negligible,” said Dr Jason Harvey, Associate Professor of Geochemistry in Leeds’ School of Earth and Environment, in a press release issued by Leeds.

With meteorite strikes offering a low probability solution, the team of researchers at Yale and the University of Leeds began looking for more likely candidates to create usable phosphorus gas.

When a lightning strike discharges into the ground, the powerful bolt of electrical energy can cause nearby soil, sand, rock, or other organic debris to fuse into bizarre-looking branches of mineraloid glass called: Fulgurite.

A fulgurite’s chemical composition is determined by the physical properties of whatever material has been struck by lightning. However, the twisting glass figures which resemble electrical discharges contain a soluble form of phosphorus from the surface rock they are made from.

The inspiration for examining the role fulgurite may have played on the early evolution life came during while the study’s primary author, Benjamin Hess, was undergoing undergraduate research at the University of Leeds, School of Earth and Environment.

In a release issued today by Leeds, Hess said he and his mentors were studying a large sample of fulgurite formed from a lightning strike in Glen Ellyn, Illinois. Initially, interested in how fulgurite is formed, researchers say they were fascinated to discover the Glen Ellyn sample contained large amounts of the highly unusual phosphorus mineral schreibersite.

Now a PhD student at Yale, Hess, and co-authors Sandra Piazolo and Jason Harvey from the University of Leeds decided to examine if enough usable phosphorus could have been produced to spurn life by estimating how many lightning strikes might have occurred on Earth billions of years ago.

Ultimately, scientists concluded after around a billion years, the Earth would have been hit by up to 0.1 to 1 quintillion bolts of lightning. Researchers suggest that many strikes would have produced enormous numbers of fulgurites, resulting in a wealth of usable phosphorus to give rise to life’s origin.

In their paper, researchers also note several other advantages to their lightning strike theory. Unlike meteorite impacts, the annual number of lightning strikes would have remained constant for billions of years. Making lightning a more likely progenitor for phosphorus and ultimately the origins of life.

The scientists also point out that lightning strikes were likely most prevalent in tropical regions of early Earth, which would have provided for more concentrated areas of usable phosphorus following Darwin’s famous “warm little pond” concept.

Ultimately, with this newly published study, researchers say the “lightning in a bottle” event that led to life on Earth, could be just that – lighting in a bottle. Or, in this particular case, fulgurite glass.

“It makes lightning strikes a significant pathway toward the origin of life,” said Hess in today’s release. “Perhaps more importantly, this also means that the formation of life on other Earth-like planets remains possible long after meteorite impacts have become rare.”