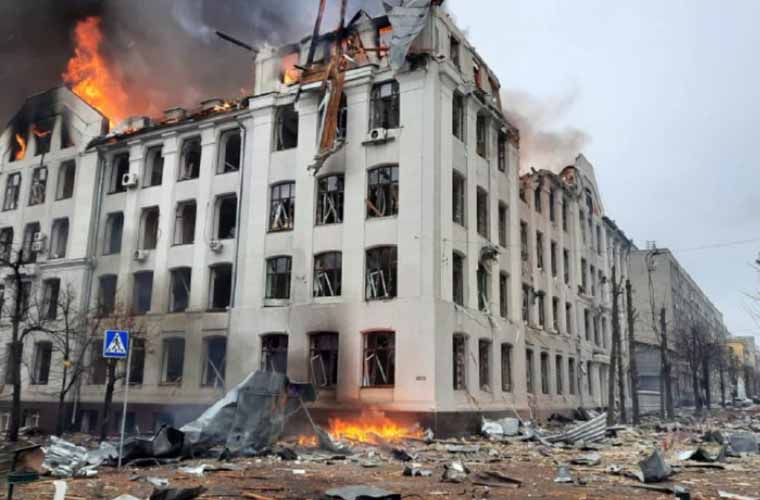 On Thursday, February 24, Russia launched a full-scale military invasion of its southwestern neighbor Ukraine. The action marked a significant escalation between the countries, which have been in a state of conflict since 2014 when Russia first supported an invasion of the eastern Donbas region and annexed the coastal peninsula of Crimea.

Here is The Debrief’s update of the conflict as of the morning of March 2.

Since February 26, Russia has continued to largely pause its major offensive ground operations along all axes of attack.

Ukraine’s second most populous city, Kharkiv, has been heavily bombarded by missile and artillery strikes. In the center of Kharkiv, Freedom Square was hit by a large ballistic missile, causing extensive damage to the Kharkiv State Academic Opera and Ballet Theater and government offices.

Barbaric Russian missile strikes on the central Freedom Square and residential districts of Kharkiv. Putin is unable to break Ukraine down. He commits more war crimes out of fury, murders innocent civilians. The world can and must do more. INCREASE PRESSURE, ISOLATE RUSSIA FULLY! pic.twitter.com/tN4VHF1A9n

According to Ukrainian officials, at least five people were killed after a Russian ballistic missile struck a large television broadcast tower and prominent Holocaust memorial in Ukraine’s capital city of Kyiv. Graphic videos published online seem to confirm these casualty reports, with five to six badly charred corpses seen near the base of the broadcast tower.

Hours prior, Russian officials warned they would be conducting “high-precision” airstrikes on the Ukrainian capital, urging citizens to flee the city. Russia’s Defense Ministry claimed it was carrying out attacks on the purported infrastructure of Ukraine’s intelligence services.

Russia has been accused of using cluster munitions in its continued attacks on Ukrainian cities. Amnesty International released a report saying that a nursery and kindergarten in Sumy Oblast had been hit by a 220mm Uragan cluster munition rocket. The strike was said to have killed a child and two other civilians.

“There is no possible justification for dropping cluster munitions in populated areas, let alone near a school,” said Agnès Callamard, Secretary-General of Amnesty International. “This attack bears all the hallmarks of Russia’s use of this inherently indiscriminate and internationally-banned weapon and shows flagrant disregard for civilian life.”

Other unconfirmed use of cluster munitions, such as Uragan 9M27K and Smerch 9M55K cluster rockets, have been reported in other areas, including the Sumy Oblast, Kharkiv, and Kherson.

Cluster munitions are explosive weapons designed to release or eject smaller submunitions or bomblets across a wide-spread area. Due to their high potential to cause indiscriminate death and destruction, 123 nations have signed the Convention on Cluster Munitions, prohibiting the use of the bombs as of February 2022.

Russia has not joined the convention and has been accused of using cluster munitions during the 2008 war in Georgia and Syria. Claims that Russia denies.

Aside from the potential for large-scale indiscriminate destruction, cluster munitions are also controversial for their high submunition failure rate. Ordnance disposal specialists have reported failure rates as high as 10% to 30%, meaning large numbers of unexploded ordinances are left scattered around the battlefield.

Russia’s now 4-day halt in armor and infantry attacks is likely based on the necessity to reorganize its original strategic thinking. Since the launch of the invasion, Russia appears to have been plagued by poor command and control, and coordination issues, along with logistical shortcomings.

Senior officials at the Pentagon say Russia’s military has been plagued by “logistical nightmares,” including poor communications, vehicles running out of fuel, and troops running out of food.

Amateur radio enthusiasts and translators have recorded hours of unsecured Russian military communications. Radio traffic has revealed severe logistical issues, including a lack of fuel and maps. Because frequencies being used are unsecured, it has allowed amateur civilians to constantly jam Russian communications, at times, even in the middle of firefights.

Recordings have displayed a disturbing lack of coordination, with Russian units attacking each other. During a fight west of Kyiv, Russian troops reported that 500 casualties, including 200 soldiers killed in action, were being transferred to a forward operating base (FOB) in Nalivaykovka.

The Moscow-based open-source intelligence site, Conflict Intelligence Team, reported that many Russian soldiers are having to rely on civilian analog walkie-talkies to communicate. The site also published videos purportedly showing captured Russian food rations with an expiration date of 2015.

Michael Kofman, the Director of Russia Studies for the Washington think tank CNA, said that published interviews with claimed Russian prisoners of war suggest that most Russian troops had no idea they were entering an active warzone when they crossed into Ukraine.

“It’s clear from a spate of POW interviews I’ve seen the troops themselves had no idea they were going to launch this op and were completely unprepared for it, including officers. Morale is low, nothing was organized, soldiers don’t want to fight & readily abandon kit,” wrote Kofman on Twitter.

Main Effort—Kyiv Axis: Russian military forces continue to try and move into position and resupply in preparation for a likely attempt to encircle Kyiv from the west. Supporting efforts to envelop the capital city from the northeast and east are slowly moving along the Chernihiv and Sumy axes.

The General Staff of the Armed Forces of Ukraine reports that up to 17 Russian battalion tactical groups (BTG) are continuing the attack from the northeast near Kozelets, Bobrovytsia, and Makiiv.

By the morning of March 2, Russian ground efforts within and near Kyiv had been reportedly limited to non-uniform saboteurs and reconnaissance elements rather than on attacks by regular combat forces.

Northeastern Axis: Russian forces have made concentrated use of bomb, missile, and artillery bombardments against Ukraine’s second most populous city of Kharkiv. The aerial bombardments are likely intended to enable a renewed ground offensive against Kharkiv within the next 24 – 72 hours.

Kharkiv Mayor, Igor Terekhov, vowed that the city would “fight to the last bullet,” saying, “And if the bullets run out, we will gnaw this horde, these fascist fascists with our teeth.”

Russian forces have not made any significant forward progress along the northeastern axis and appear to be concentrating on reducing pockets of resistance in the areas of Sumy, Lebedyn, and Okhtyrka. There have been reports of heavy shelling in the area of Okhtyrka.

Crimea Axis: Multiple reports suggest Russian forces have completely encircled the city of Mariupol by land and sea. While Russia has confirmed the encirclement, The Debrief has not independently validated these claims.

Section 31: The Military Coders Who Hacked How We Track Objects in Space

Prospects for the defense of Mariupol, however, look grim. It is likely that either by containing the defenders within the city or seizing Mariupol, Russian troops will successfully complete a land bridge connecting its southern Crimea and Eastern Donbas axes.

Russian forces have likely resecured control of Kherson city after losing it to Ukrainian counterattacks over the weekend. Russia is likely consolidating its forces in Kherson before continuing a western advance towards Mykolayiv and Odesa.

Donbas Axis: On March 1, Russian military and proxy forces on the Donbas axis have concentrated on attacking Mariupol from the east and connecting with troops on the Crimea axis.

So far, Russian troops and proxy forces have not made any other significant westward offensive pushes along the Donbas contact line.

Russia is expected to continue to maneuver towards the west and southwest of Kyiv in hopes of encircling it. Russian troops will likewise try to secure a crossing over the Desna near Chernihiv to link up with forces on the Sumy axis to open up a new eastern attack on Kyiv.

Within the next 24-48 hours, Russian troops near Kherson are expected to advance towards Mykolayiv and Odesa. The Russian military and proxy forces will likely begin more aggressive offensive operations to seize Mariupol.

There are conflicting reports on whether Russian ally Belarus has committed military forces to the invasion. Indications, however, are extremely high that Belarus will be entering the war against Ukraine if it hasn’t covertly done so already.

U.S. intelligence officials believe Russia has committed 80% of its pre-staged combat forces to the invasion.

The Russian military still maintains a net advantage in combat strength over Ukraine. Surprisingly, however, due to poor coordination, low morale, and logistical issues, it remains to be seen if Russia actually has significant available forces to complete its primary objective of seizing Kyiv and forcing a regime change.

Despite the Kremlin’s crackdown on anti-war sentiment, there continues to be growing unrest in Russia over the invasion. Independent Russian human rights organization, OVD-Info, reports that 6,830 people have been detained during anti-war protests since February 24.

On March 1, local Moscow politician Ilya Yashin posted photographs of children reportedly detained by Russian police for protesting the war. “Nothing out of the ordinary: just kids in paddy wagons behind an anti-war poster. This is Putin’s Russia, folks. You live here,” wrote Yashin on Twitter.