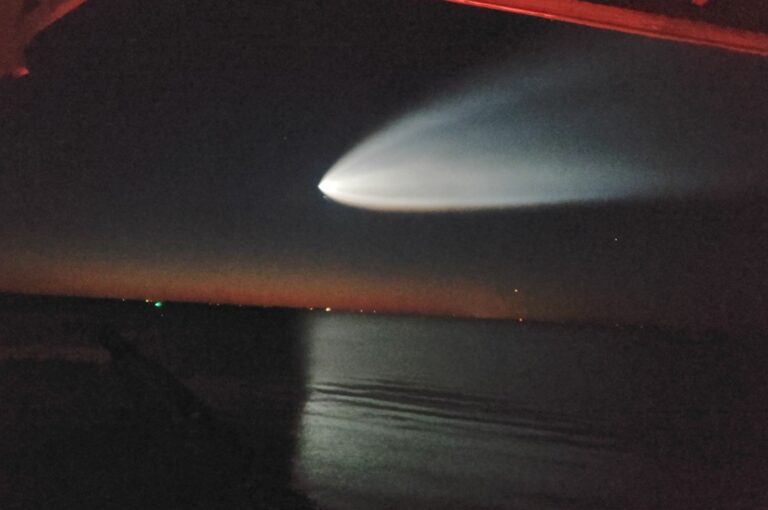 “Look at that,” one man could be heard saying. “What is that?”

“Wow, meteorite… or a UFO,” another man guessed.

The two startled observers, one of whom described the object as “Amazing to see”, saw the brilliant speeding light from what appeared to be Terminal C at LaGuardia Airport in a video later uploaded to YouTube. However, they weren’t the only people in New York who saw the striking display over the northeast only a few days ago.

In fact, dozens of people reported seeing the object shortly after 6 AM EDT on March 14. Many believed that, rather than being a genuine UFO, it had simply been a meteor streaking through the early morning sky. Observers from as far north as Ontario, Canada and as far south as Greensboro, North Carolina all reported the odd apparition as it passed overhead, according to data from the American Meteor Society.

However, the object that had many early risers saying “fireball” was, in fact, no meteor at all.

The mystery object had been a SpaceX Falcon 9 Starlink-21 launch, which lifted off from Kennedy Space Center in Florida earlier that morning.

“SpaceX plans to launch the 22nd mission of the constellation of networked satellites known as Starlink,” read a statement at the Kennedy Space Center website. “The goal of Starlink is to create a network that will help provide internet services to those who are not yet connected, and to provide reliable and affordable internet across the globe.”

Part of what made the rocket launch such an impressive appearance in the predawn sky had been the fact that as the sunrise beyond the horizon reflected off of the rocket’s plume, it illuminated the path of the spacecraft giving it a brilliant, glowing appearance. These special conditions for an illuminated rocket plume can only occur during dawn and dusk launches, and have often caused observers to mistake the objects for UFOs.

“This sighting isn’t the first time that skywatchers have mistaken a rocket launch for something stranger in the sky,” notes Chelsea Gohd writing for Space.com. “SpaceX launches have sparked claims of UFOs,” she says, on account of the odd appearance of the spacecraft under similar lighting conditions to that of the March 14 launch.

Presently, there were no reports logged with the National UFO Reporting Center for March 2021 that appeared to describe the SpaceX launch.

The launch carried the latest batch of 60 Starlink satellites into orbit, bringing the current total to 1,241. Eventually the company plans to have thousands of the satellites in its constellation, which are already providing internet services to more than 10,000 users in several countries.

And subscribe to The Debrief YouTube Channel to check out all of The Debrief’s exciting original shows: