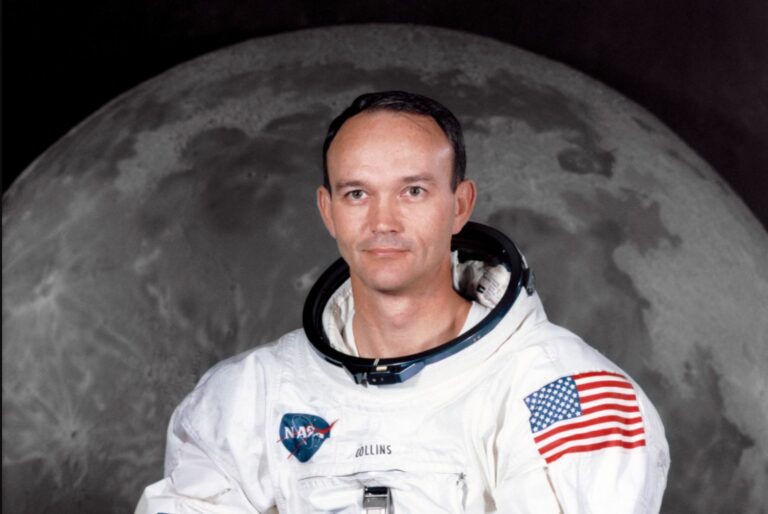 “Heroes abound, and should be revered as such, but don’t count astronauts among them.”

These were the words of the late astronaut Michael Collins, whose role during the Apollo 11 mission with Neil Armstrong and Buzz Aldrin placed humans on the moon in 1969. Collins passed away on Wednesday of cancer, according to a statement from his family. He was 90.

“We work very hard,” Collins said during an interview in 2009. “We did our jobs to near perfection, but that was what we had hired on to do,” Collins said, adding that “in no way did we meet the criterion of the Congressional Medal of Honor, ‘above and beyond the call of duty’.”

Michael Collins, whose job during the Apollo 11 mission included remaining aboard the command module and orbiting the moon alone while Neil Armstrong and Buzz Aldrin descended to the surface, played a key role in a mission widely regarded as the single greatest achievement of the 20th century, if not of all time. Despite this, he maintained a humble attitude throughout his life, and chose not to view himself—or other astronauts—as celebrities on account of the work they do.

“Celebrities? What nonsense,” Collins said in 2009. “What an empty concept for a person to be… How many live-ins, how many trips to rehab, maybe–wow–you could even get arrested and then you would really be noticed. Don’t get me started.”

In an era where, as artist Andy Warhol once predicted of the future that “everyone will be world-famous for 15 minutes,” Collins’ observations on what criteria constitutes fame are as meaningful now as ever. Despite his own achievements during the 1969 moon mission, that never mattered to him as much as his role and service to his country, and to science.

The Apollo 11 mission did more than merely place men on the moon; it marked what many view as the end of the Cold War-era space race between the Soviets and the United States.

Collins considered the events that led to his participation in the historic mission as being tantamount to luck. Like astronauts Armstrong and Aldrin, Collins was born in 1930.

“We came along at exactly the right time,” Collins remembered in 2009. “We survived hazardous careers and we were successful in them. But in my own case at least, it was 10 percent shrewd planning and 90 percent blind luck. Put LUCKY on my tombstone.”

Born in Rome on Halloween to mother Virginia and his father James, a U.S. Army Major General, Collins entered the U.S. Military Academy, graduating one year behind Aldrin in 1952. He thereafter joined the Air Force and became a fighter pilot. Following John Glenn’s orbital flight in 1962, Collins applied to NASA, but was not accepted until his second try in 1963. The two-man Gemini 10 mission would be Collins’ first trip into space, where he performed a spacewalk. To this day, somewhere in orbit around Earth is a camera that Collins lost during his time outside the Gemini 10 capsule.

In advance of the Apollo 11 mission, Collins and his fellow astronauts trained for a period of only six months. On July 16, 1969, liftoff occurred from NASA’s launch facility at Cape Canaveral, Florida, after which the men spent eight days aboard Apollo 11 where Collins served as pilot of the command module.

Collins later reflected on being the only man aboard the command module while his colleagues explored the lunar surface below him.

“Far from feeling lonely or abandoned, I feel very much a part of what is taking place on the lunar surface,” Collins said. “I know that I would be a liar or a fool if I said that I have the best of the three Apollo 11 seats, but I can say with truth and equanimity that I am perfectly satisfied with the one I have. This venture has been structured for three men, and I consider my third to be as necessary as either of the other two.”

Collins did, however, acknowledge the isolation of the experience.

“I don’t mean to deny a feeling of solitude,” Collins said. “It is there, reinforced by the fact that radio contact with the Earth abruptly cuts off at the instant I disappear behind the moon, I am alone now, truly alone, and absolutely isolated from any known life. I am it. If a count were taken, the score would be three billion plus two over on the other side of the moon, and one plus God knows what on this side.”

Before radio contact was lost with Collins as his spacecraft passed beyond the moon, Mission Control joked with him that he was “about the only person around that doesn’t have TV coverage of the scene.”

“That’s all right. I don’t mind a bit,” Collins quipped with his usual optimism.

Although the focus of the mission had been studying the moon, Collins could not help but look back on his time with NASA and think about Earth.

“As I look back on Apollo 11, I more and more am attracted to my recollection, not of the moon, but of the Earth,” Collins said on the 50th anniversary of the mission in 2019. “Tiny, little Earth in its little black velvet background.”

Officials at NASA apparently hoped that Collins and his fellow Apollo 11 astronauts would perform future missions, but Collins had been adamant that Apollo 11 would be his last trip to space. Shortly after piloting the command module for the historic mission, Collins made his departure from NASA and became assistant secretary for public affairs with the State Department. After a year in this position, Collins then transferred to the Smithsonian Institution, where he oversaw plans to open its Air & Space Museum. Personal items Collins used during the mission that include his shaving kit and toothbrush are now on display at the portion of the museum he helped plan and design.

Despite never having desired to return to space after Apollo 11, Collins regretted not being able to travel to more distant destinations like Mars.

“I am too old to fly to Mars, and I regret that,” Collins said. “But I still think I have been very, very lucky.”

Meteor Shower? Strange Lights Over the Pacific Northwest Had Another Explanation

Asked about the future of human space exploration in 2009, Collins said that he hoped Mars would be a focus for future space missions.

“It was my favorite planet as a kid and still is,” Collins said. “As celestial bodies go, the moon is not a particularly interesting place, but Mars is. It is the closest thing to a sister planet that we have found so far.”

However, following the space race, the political drive that once urged the United States to put humans into space—and eventually on the lunar surface—had waned somewhat, which concerned Collins.

“I worry that at NASA’s creeping pace, with the emphasis on returning to the moon, Mars may be receding into the distance,” he said.

Reflecting on his life and participation in the historic moon mission, Collins considered himself lucky to have lived through some of what he considered to be the greatest periods of innovations in human history and experiencing all of them firsthand.

“I was born in the days of biplanes and Buck Rogers, learned to fly in the early jets, and hit my peak when moon rockets came along.”