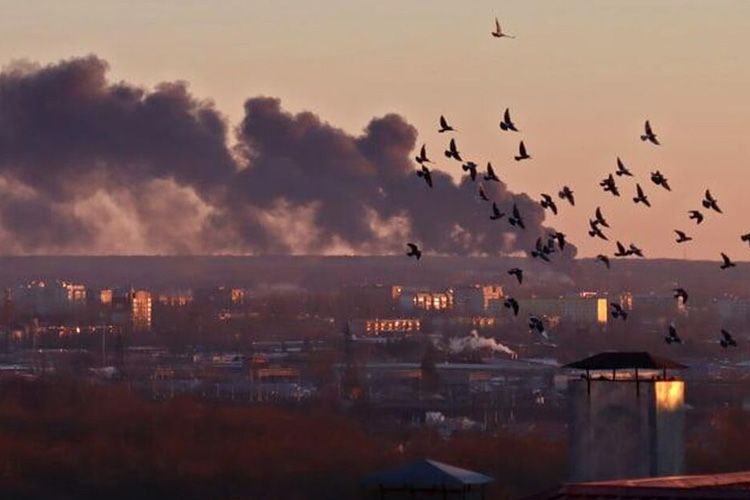 Ukraine has been quietly carrying out strikes on Russian military targets deep inside Russian territory over the past few weeks, using what appears to be a mysterious new type of kamikaze drone.

On January 17, Russian sources said “about seven” unmanned aerial vehicles (UAV) suddenly appeared over a military base where volunteers and recently mobilized conscripts of the Russian Armed Forces are being trained.

The exact location of the training facility was not revealed. However, military sources say the site was roughly 70 miles (100 kilometers) beyond Russia’s southern border with Ukraine.

One Russian commentator claimed on Telegram that most of the UAVs were “shot down by air defense units covering the area.” However, at least some of the drones reached their targets without inflicting “significant damage.”

While these recent attacks apparently didn’t cause significant damage, there’s reason to believe they have raised serious concerns within the Kremlin about Russia’s ability to protect military targets deep within its borders.

Especially since images shared online of the remains of a kamikaze drone purportedly used in recent strikes appear to show the same type of mysterious UAV reportedly used in several recent deadly attacks on Russian military bases throughout December.

In at least four known incidents, the Russian bases hit by kamikaze drone strikes were located hundreds of miles outside Ukraine and closer to Moscow than Kyiv.

In the first wave on December 5, explosive-laden UAVs struck Engels Air Force Base near Saratov and Dyagilevo military base in the central city of Ryazan, about 100 miles from Moscow. According to the Kremlin, two military planes were “slightly damaged,” and three servicemen were killed in the attacks.

On December 26, Engels Airbase again found itself on the receiving end of Ukrainian drone strikes. Located in Russia’s southwestern Saratov region, roughly 450 miles from Ukraine, the airfield is home to Russia’s Tu-160 and Tu-95MS strategic bombers.

Russian officials claimed three service members had been killed in the December 26 strikes on Engels, allegedly by falling debris from a drone downed by air defenses.

The type of UAV carrying out these long-range air attacks remains a mystery.

Russia’s defense ministry has claimed that some of the December attacks were carried out by modified versions of the Soviet-era Tu-141 reconnaissance drone.

In early March, a modified Tu-141 carrying an explosive crashed near a school in Croatia, resulting in no casualties to anyone on the ground. Publicly, Kyiv denied responsibility for the event.

Croatian media reports citing unnamed sources with the Ministry of Defense said an investigation revealed the drone belonged to the Ukrainian Air Force. Reportedly the Tu-141 had strayed off-course while on its way toward Russian positions, flying over Romania and Hungary before running out of fuel and coming down in Croatia.

It is unclear if Ukraine has any more Tu-141 drones. However, it’s unlikely that the December attacks on Russian bases were carried out by the nearly 50-year-old Soviet drone.

The Tu-141 has a 12.5-foot wingspan, measures over 47 feet in length, and is nearly comparable in size to a fighter jet. To be responsible for the December strikes would mean the relatively large subsonic UAV had penetrated Russian airspace for hundreds of miles and, in one instance, came within 100 miles of Moscow.

Even taking Moscow’s claims at face value, it would mean that modified Tu-141s traveled through Russian airspace, in some cases for nearly an hour, before being brought down over their intended targets by last-resort air defenses.

Others have theorized that the recent drone strikes are being carried out by a new classified UAV developed by Ukrainian aerospace company Ukroboronprom.

Ukroboronprom recently announced that a new unnamed drone had passed several undisclosed tests. Reportedly, the UAV can strike targets up to 600 miles (1000 kilometers) and carry a payload of up to 165 lbs. However, Ukroboronprom officials say the new UAV has not reached production status.

Speaking under a condition of anonymity, a Ukrainian defense advisor told the Financial Times that the recent long-range strikes were not being carried out by modified Soviet or Ukroboronprom drones. According to the advisor, a secret joint government-private sector initiative that could produce new kamikaze drones “often” was responsible for the attacks.

Images shared online of what was said to be the remains of the kamikaze drones used in the recent attack on the Russian training base appear to match the purported remnants of UAVs used in at least some of the December attacks.

The photos reveal a small UAV with long slender wings and a rear electric-engine-driven propeller. Although the aircraft’s make and model are not readily identifiable, the UAV is definitely not a modified Tu-141.

Images obtained by The Debrief show the Internal components of the UAV appear to all come from Western, primarily American, manufacturers.

Many components are relatively inexpensive and easily obtained through various electronic supply companies. For example, the UAV’s electronic speed control motor appears to be manufactured by the Los Angeles-based company Hobbywing.

One component that appears to be something other than an off-the-shelf item is the drone’s multi-frequency GNSS antenna. The navigation system bears a manufacturing stamp from California-based Antcom. However, the device’s specifications and product number do not appear in the communications equipment supplier’s existing catalog, suggesting the GNSS receiver is custom-made.

Based on the wreckage, the UAV uses a Cube Orange+ processor for autonomous flight control. Notably, the flight control module appears to be mounted to a custom circuit board, not a standard ADS-B Carrier Board.

Remains of a drone reportedly used in one of the December air base attacks had the phrase “To Kyiv” stenciled on its wings. One of the UAVs used in the January airstrike displayed “V” and “O” on the wings. Both letters, along with the more widely used “Z” symbol, have been painted on Russian military vehicles during the Ukraine invasion to identify them as Russian forces.

The drones are designed to passively loiter over an area until a target has been identified. During an attack, the drone enters a terminal phase, flying itself into a target and detonating an explosive payload.

Loitering munitions can quickly react and adjust in real-time, making them ideal for searching out and destroying concealed targets. They additionally offer users a degree of selective targeting not afforded by most guided missiles.

The explosive UAVs are also much smaller than conventional attack drones like the U.S. MQ-1 Predator or Turkish TB2 Bayraktar, making them extremely difficult for air defense systems to interdict.

Throughout the fall and winter, Russia has extensively used the Iranian-made Shahed 136 loitering munition to carry out attacks on civilian infrastructure throughout Ukraine.

Unconfirmed reports by Russian sources have claimed the mysterious kamikaze drones carry a 5lb explosive payload packed with shrapnel to increase its destructive impact. If accurate, it would mean the kamikaze drones pack enough punch to destroy light armored vehicles or be used with devastating effects as an anti-personnel weapon.

Defense officials have declined to comment on the images, and The Debrief has been unable to independently verify the authenticity of the photos or the depicted drone wreckage.

Images of the reported Ukrainian kamikaze drones reveal an overall design akin to a smaller version of Israeli UVision HERO-900 loitering munition. Analysis of the hardware hints the drones likely have an operational range of 60 to 100 miles.

Rather than employing some new sophisticated aerial weapon, indications point to Kyiv continuing to be incredibly crafty in finding ways to take the fight to Putin.

The implications are that the UAVs used in the December attacks on the Dyagilevo and Engels Airbases didn’t originate hundreds of miles away in Ukraine but were launched from inside the Russian Federation.

This reality creates a whole different set of headaches for the Kremlin. In addition to safeguarding its airspace, Russian security services must also be concerned about Ukrainian forces covertly operating within its borders.

The presence of clandestine operators inside Russia certainly comes as no surprise. Particularly since there have been many suspicious fires or apparent acts of sabotage throughout the past year, including as recently as January 21, when an oil depot in Russia’s far eastern Irkutsk Oblast mysteriously ignited.

Yet, adding a new wrinkle to Russia’s Federal Security Service’s (FSB) ability to keep the war out of the “motherland,” these hard-to-detect drones are most likely being launched by operators who are safely dozens, perhaps, close to a hundred miles away from their intended targets.

It is also suspected that around 30 and 40 drones were involved in the attacks in December and January, meaning Ukrainian saboteurs have likely established a nice stockpile of kamikaze drones within Russia’s borders.

Ultimately, these drone strikes will have little impact on Russia’s ability to wage war inside Ukraine. However, even when inflicting minor wounds, any attacks deep inside the enemy’s territory reinforce the domestic costs of war and ensure Kyiv can remain inside the Kremlin’s decision-making processes.

And while the Kremlin remains committed to its informal policy of publicly diminishing the realities of war, there is clear evidence that recent drone attacks have Russian officials on edge.

On January 19, a Pantsir-S1 air defense system was installed on the roof of the Russian Ministry of Defense Headquarters in Moscow. The Kremlin has so far not provided any explanation for what provoked officials to beef up air defense at the capital. However, the medium-range surface-to-air missile system notably appeared two days after the kamikaze drone attack at the Russian military training facility.

“Ukraine’s ability to strike deep into Russian territory is not just militarily significant,” Max Bergmann, a former American diplomat, and expert on European and Russian security at the Center for Strategic and International Studies, told the New York Times.

“It also sends a message to Russia that continuing the war is not cost-free, that it is not just Ukraine which is vulnerable to long-range drone and missile strikes.”