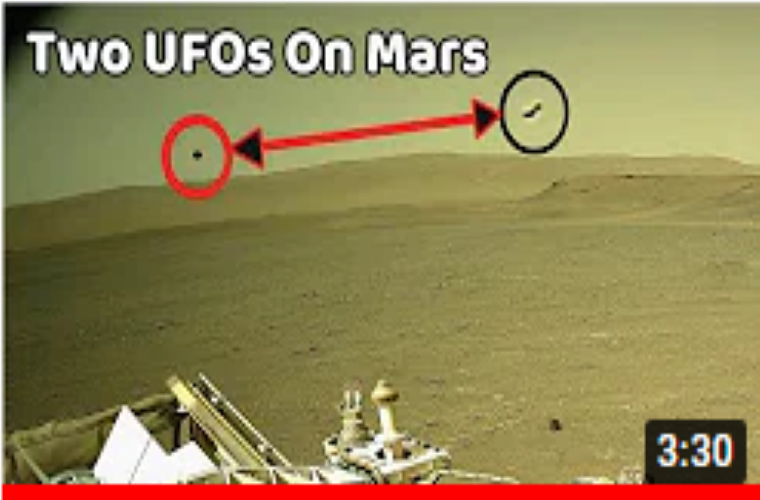 According to NASA, images of two separate UFOs photographed by the Perseverance Rover hanging in the skies of Mars are most likely fakes. This type of direct statement from the American space agency on UFOs is new, as previous, similar images either haven’t been addressed or were simply dismissed as grains of sand or dead pixels in the image.

Both images are part of a video sent to The Debrief, alleging to show what appears to be two separate UFOs photographed by the Perseverance rover. However, the space agency says such efforts are almost surely the result of “space enthusiasts” who make these types of images for fun.

UFOS IN SPACE IMAGERY ARE NOT NEW

Humans regularly scan Earth’s skies for UFOs. Since the first human-made craft ventured into space in the 1960s, people have also scoured the videos and still images returned by these craft in hopes of finding something unexplained. Such images often make it to social media and other platforms, where skeptics and believers alike can dissect, analyze and mull them over to their heart’s content.

Still, from time to time, these “anomalous” videos and images make their way to The Debrief’s News Desk, compelling us to find an answer. NASA has typically been reluctant to address unusual things spotted in their images, especially those labeled UFOs, but this time they are going ahead and calling this latest image a likely fabrication.

“Thank you for your interest in NASA’s Perseverance rover,” reads the reply from NASA spokesperson Alana Johnson when asked by The Debrief about the suspect video. “Space enthusiasts and other image processors are often excited about raw imagery downlinked from NASA spacecraft. Sometimes it is used and altered to create fan-made works shared online. The particular product you are asking about seems to be one of those examples.”

Johnson provided a link to the agency’s raw image database, which they said is the likely source of the altered image. Unfortunately, the image database has over 100,000 pics just for Perseverance alone, so tracking down the exact photos from the video was unsuccessful. However, a quick survey of the YouTube poster behind the video reveals some odd findings.

However, a quick scan down to the channel’s “popular” uploads reveals a treasure trove of previous videos also purporting to show UFOs over Mars. And much like the newest video, they are filled with images taken directly from NASA. Most have over 100k views, with many earning or exceeding half a million. Strangely, the latest video with the two Perseverance UFOs has less than 1k views.

Although a fabricated UFO video is not exactly breaking news, the fact that NASA was willing to comment on the video seems to echo a change in attitude toward UFO questions in general. This may be a one-time event, but it may also mean that the statements made by new NASA head Bill Nelson regarding UFOs have given the agency some license to finally address the issue head-on.

In this case, that (potential) new freedom meant simply pointing out that the images from the video are likely fake. However, given the critical role NASA plays in the scientific search for extraterrestrial life, this may also signal a shift in the agency’s public stance, allowing for an open discussion between media and NASA over this question. Let us hope so.