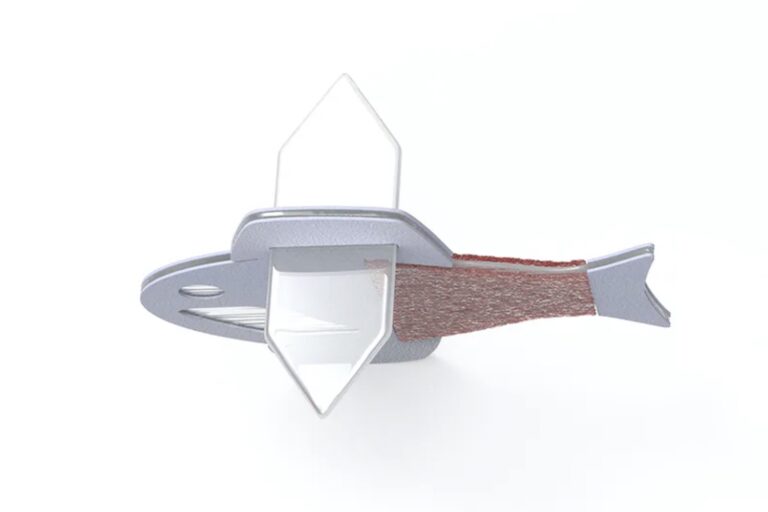 Don’t worry, this isn’t a new species or lifeform — even though it can swim like a fish and survive on its own for more than 100 days.

The first fully autonomous biohybrid fish — made out of stem-cell-derived cardiac muscle cells — was created by a collaboration between scientists at Harvard and Emory University. It consists of two layers of cardiac muscle cells grown on top of an artificial tail fin.

Their research paper detailing this work was published recently in Science.

While the research sounds cool, you might be wondering why scientists spent all this time working on these biohybrid fish. The senior author involved in this research, Kit Parker, Ph.D., associate faculty member of the Wyss Institute at Harvard University explained that the ultimate goal is building artificial hearts to replace malformed organs.

In the US, the waiting time for a heart transplant can often exceed six months. Though the number of heart transplants each year is increasing with more than 3000 transplants in 2016, the waitlist continues to grow. If they are developed, artificial hearts could reduce the transplant waiting time and save lives. To get there though, researchers need a better understanding of how the heart works — recreating the anatomy of the human heart isn’t enough to solve the problem.

“Rather than using heart imaging as a blueprint, we are identifying the key biophysical principles that make the heart work, using them as design criteria, and replicating them in a system, a living, swimming fish, where it is much easier to see if we are successful,” said Parker in a Harvard press release. His team previously experimented with rat cardiac muscle cells, creating a biohybrid jellyfish and stingray.

The design of the biohybrid fish in their latest study relies on a closed-loop of stretching and contracting muscle cells.

Each side of the artificial fin has one layer of cardiac muscle cells. When cells on one side of the fin contract, the cells on the other side stretch causing the fin to move. The stretching activates a protein receptor in the cardiac cells which leads to contraction on the other side of the fin, generating more movement. This loop generates a swimming motion, not unlike a zebrafish, propelling the biohybrid by mimicking the feedback mechanisms of the human heart.

“The results highlight the role of feedback mechanisms in muscular pumps such as the heart,” said Keel Yong Lee, Ph.D., a postdoctoral fellow at SEAS and co-first author of the study.

It also sports an artificial pacemaker that regulated the speed and rhythm of the cardiac muscle contractions. It also makes the biohybrid fish a model for understanding heart dysfunction and arrhythmia. Remarkably, the cardiac cells mature over the first month, increasing the amplitude of contractions, swimming speed, and muscle coordination as the tail fin moves back and forth. This system is sufficient to allow the biohybrid to survive for more than 100 days.

While exciting, Parker was quick to note the research is still in its early phases.

“I could build a model heart out of Play-Doh, it doesn’t mean I can build a heart,” said Parker. “You can grow some random tumor cells in a dish until they curdle into a throbbing lump and call it a cardiac organoid. Neither of those efforts is going to, by design, recapitulate the physics of a system that beats over a billion times during your lifetime while simultaneously rebuilding its cells on the fly.”

The laboratory group continues developing new hybrid devices with the goal of eventually being able to build an artificial heart.