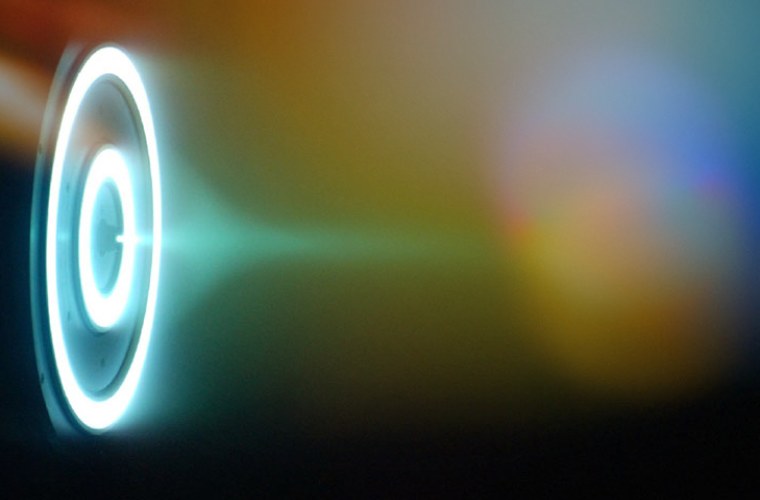 Just four days after headlines announced that a team from Germany’s Dresden University led by researcher Martin Tajmar had seemingly proven once and for all that the increasingly infamous EmDrive fails to produce any measurable thrust, it’s inventor Robert Shawyer, took the stage at a virtual propulsion conference to not only refute those test results, but indicated that he told the team undertaking those tests years earlier that their flawed designs would guarantee failure.

“In October of 2017, I did explain to him [Tajmar] why the NASA cavity was never going to give any thrust,” Shawyer told attendees at the April 3, 2021 Alternative Propulsion Energy Conference (APEC). “And bless him, he’s spent four years proving that I was right.”

Background: What is EmDrive Propulsion?

Of course, failed tests and tantalizingly successful ones, including a 2016 doozy by folks at NASA that did seem to produce thrust are not anything new for Shawyer. In fact, ever since first proposing his ‘propellant-less’ electromagnetic drive (hence the name) that ostensibly uses microwaves inside an enclosed cavity to theoretically cause measurable thrust, it has been met with nearly universal skepticism by his fellow scientists, with one 2018 piece even declaring, “Space Unicorns are not your friend.”

That’s because even though the EmDrive requires an energy source to generate the microwaves, there is no onboard fuel, or propellant, that is emitted. This idea of thrust without an emitted propellant not only violates Newton’s 2nd and 3rd laws of motion governing the conservation of momentum, say skeptics, but would pretty much upend a century of mathematics and science that all seem to support those laws.

“The idea not only violates Newton’s third law of motion,” wrote Rochester Institute of Technology astrophysicist Brian Koberlein in a May 2017 Forbes piece, “it violates special relativity, general relativity, and Noether’s theorem. Since these are each well-tested theories that form the basis of countless other theories, their violation would completely overturn all of modern physics.”

“Not so fast,” says Shawyer.

His company SPR Ltd has been investigating and testing his designs since 2001. His drive, he says, works on a completely different, universally accepted principle that does not violate those laws.

“At first sight, the idea of propulsion without propellant seems impossible,” says SPR Ltd’s website. “However the technology is firmly anchored in the basic laws of physics and following an extensive review process, no transgressions of these laws have been identified.”

The site goes on to explain that the principle of operation for this system is based on a phenomenon called radiation pressure, and that instead of violating Newton’s laws, radiation pressure actually, “relies on Newton’s Second Law where force is defined as the rate of change of momentum. Thus an electromagnetic (EM) wave, travelling at the speed of light has a certain momentum which it will transfer to a reflector, resulting in a tiny force.”

It is this relatively tiny force, applied consistently and without the need for propellant that has reportedly intrigued the likes of Boeing Phantom Works, NASA and even the U.S. Navy. Ever since its design was first proposed, especially since in the near vacuum of space, a tiny yet consistent force will cause a spacecraft to accrue momentum over time, translating into much cheaper, and ultimately faster space travel. And, if Shawyer’s plans discussed at the conference to one day scale that force up to an actual launch vehicle using superconducting materials were to somehow become a reality, it could change the entire industry.

“[This type of propulsion could] transform space travel, and see craft lifting silently off from launch pads and reaching beyond the solar system,” said Mike McCulloch, a lecturer in geomatics (the mathematics behind positioning objects in space) at the University of Plymouth, U.K., in a 2020 interview. “We can also get an unmanned probe to Proxima Centauri in a (long) human lifetime, 90 years.”

Analysis: What Went Wrong with the EmDrive tests?

Unfortunately, the latest tests from Tajmar and the Dresden team threaten to derail such grand plans even before they get off the proverbial ground.

“We found out that the cause of the ‘thrust’ was a thermal effect,” said Tajmar when presenting his results at the Space Propulsion Conference 2020+1 (which was actually held in March of 2021 due to the COVID pandemic). “Our measurements,” his presentation concluded, “refute all EmDrive claims by at least 3 orders of magnitude.”

He also pointed out that, “for our tests, we used NASAs EmDrive configuration from White et al. (which was used at the Eagleworks laboratories), because it is best documented.” And as already explained, it is this specific cavity design that is the main source of Shawyer’s objection.

“The NASA cavity, which is the basis of Martin’s work and at least 3 other organizations, is fatally flawed,” he told APEC conference attendees. “You’re never going to get traveling waves in a flat end cavity. The cavity he’s working with is not a traveling wave cavity, so you know [before testing] it’s going to give you zero thrust.”

When questioned further by Mark Sokol of Falcon Space, who is also one of the conference’s co-founders, Shawyer went even further himself, once again pointing out how he has been saying this for years to anyone who will listen.

“Three other competent organizations have also found this,” he said, “and I advised one of them many years ago of all of the reasons why a NASA cavity wouldn’t work. And I’m not saying it was my fault, but it wasn’t long afterwards when NASA abandoned that work.”

Whether or not that advice was the reason behind the end of NASA’s effort, and regardless of Shawyer’s objections to their designs, it appears that, as far as Tajmar and his team are concerned, their results are correct. They did, however, note that some benefits did come out of their exhaustive attempts.

“Looking back, those was [sic] four years of hard work. It is not trivial to carry out clean thrust measurements in this area. Unfortunately we weren’t able to verify any of the drive concepts, but we were able to greatly improve our measurement technology as a result, so that we can of course continue researching in this science area and perhaps discover something new.”

Improved measurement technology and future research aside, Shawyer told APEC attendees that he actually sees a completely different benefit to Tajmar’s nearly half a decade of work.

“What Martin has done is put a huge amount of effort into basically proving that the principles behind EmDrive are correct, because if you don’t follow the correct principles you don’t produce any thrust whatsoever. So, I’m quite grateful to Martin, actually, and I would have never done all of that work myself, and I don’t know anybody else that would have put all of that effort into it.”

As it turns out, someone else may be doing this work after all, a particularly familiar name when it comes to testing fringe propulsion concepts: The Defense Advanced Research Projects Agency, or DARPA.

At the time that project was announced in 2018, manager Mike Fiddy explained how this principle will be investigated under their Nascent Light Matter Interactions (NLM) program, an effort actually being overseen by geomatics professor Mike McCulloch.

“McCulloch’s research will model and test the interaction of light with strongly resonant cavities,” said Fiddy, “and it relies on a prediction from quantum theory that accelerating objects experience a thermal background known as Unruh radiation.” Unfortunately, since Unruh radiation is also still theoretical, proving the actual mechanism behind how it would allow the drive to cause thrust is still also theoretical.

When asked by The Debrief what practical steps he and his SPR Ltd team will undertake, or if there has been any commercial space industry interest in his drive, Shawyer was initially cagey, although his ultimate answer did seem to hint that more secret work had already been done, and that some tantalizing announcements may be forthcoming.

“I have to be careful here, because there are clearly steps that have been taken that are not in the public domain. But if you move from what’s in the public domain, then the next step is to fly first generation spacecraft, first generation EmDrive thrusters, and then fly small UAVs, small flying vehicles for 2nd and 3rd generation. That is the sort of sequence of things that will become known over the next few years.”

In the end, whatever Shawyer and SPR Ltd.’s timeline may end up being, the original reporting on the DARPA project indicated that results are expected around May of 2021.

So, it appears one way or another, following 23 years of theories, tests and varying results, that maybe, just maybe, there may be another set of tests from the esteemed DARPA coming very soon that will finally tell us once and for all if the EmDrive really works, or if it doesn’t. Let’s all just hope they are using a Shawyer-approved design, or something says we may, once again, end up right back where we started.