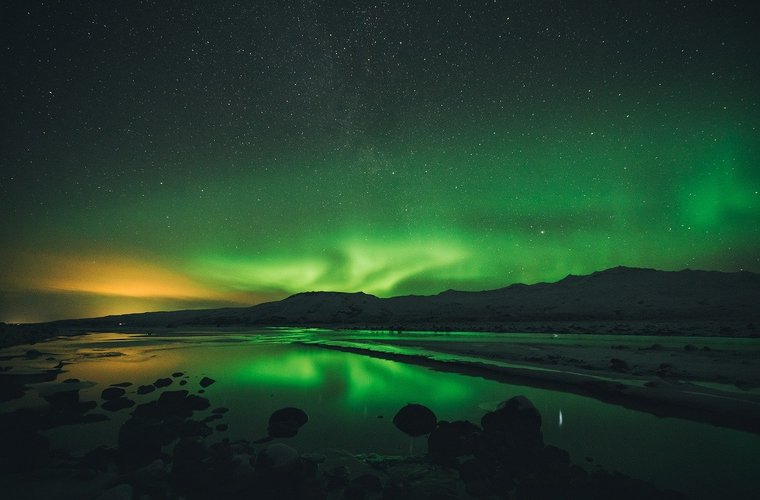 In a recent study, physicists with the University of Iowa say they have discovered a new new feature of auroras – the brilliant natural light displays predominantly seen near Earth’s high-latitude regions.

Researchers call this mysterious disappearing and reappearing act “diffuse auroral erasers.” Presenting their findings in the Journal of Geophysical Research Space Physics, physicists say this is the first time this type of phenomena has ever been mentioned in scientific literature.

“The biggest thing about these erasers that we didn’t know before but know now is that they exist,” said Dr. Allison Jaynes, assistant professor in the Department of Physics and Astronomy at Iowa and study co-author, in a press release by the University of Iowa. “It raises the question: Are these a common phenomenon that has been overlooked, or are they rare?

Capable of producing vivid displays of sprawling green, purple, or pink hues across the sky, people have marveled at the site of auroras for over millennia.

Less dramatic, another type of aurora that occurs in the Earth’s atmosphere is called the “diffuse aurora,” which appears like a faint glow in the background and over large portions of the night sky. While diffuse auroras are very common, the phenomenon is not well understood.

On March 15, 2002, Dr. David Knudsen, a physicist at the University of Calgary, set up a video camera to film auroras in Churchill, a town along Hudson Bay in Canada. Though the forecast had called for perfect conditions for viewing auroras, Knudsen was disappointed to find no dazzling light shows appeared.

Though Knudsen saw nothing but darkness in the night sky, the low-level light camera he was using was picking up lots of auroral activity, invisible to the naked eye. The camera, which could convert near-infrared light to visible light, was capturing an unusual sequence where areas of the diffuse aurora suddenly disappeared and reappeared. Later viewing the video, Dr. Knudsen recorded the odd observation in his notebook, “pulsating ‘black out’ diffuse glow, which then fills in over several seconds.”

“What surprised me, and what made me write it in the notebook, is when a patch brightened and turned off, the background diffuse aurora was erased. It went away,” Dr. Knudsenl, a co-author of the recent study, said in the University of Iowa press release. “There was a hole in the diffuse aurora. And then that hole would fill back in after a half-minute or so. I had never seen something like that before.”

Then a graduate student, Dr. Jaynes, learned of Dr. Knudsenl’s unusual observations at a scientific meeting in 2010. Dr. Jaynes would later reference the still unstudied disappearing and reappearing auroras in her doctoral thesis on diffuse aurora a few years later.

Now an assistant professor in the Department of Physics and Astronomy at the University of Iowa, Dr. Jaynes suggested to graduate student Riley Troyer that he should investigate Knudsenl’s unusual auroral observations.

“I knew there was something there. I knew it was different and unique,” Dr. Jaynes told Iowa Now. “l had some ideas how it could be analyzed, but I hadn’t done that yet. I handed it to Riley, and he went much further with it by figuring out his own way to analyze the data and produce some significant conclusions.”

“I’ve seen hundreds of auroras growing up,” said Troyer, an Alaskan native who is in his third year of doctoral studies at Iowa. “They’re part of my heritage, something I can study while keeping ties to where I’m from.”

Troyer created a software program that could focus on frames in Knudsenl’s video when the faint erasers in the diffuse aurora were visible. Ultimately, Troyer was able to catalog 22 eraser events in the two-hour recording.

“The most valuable thing we found is showing the time that it takes for the aurora to go from an eraser event (when the diffuse aurora is blotted out) to be filled or colored again and how long it takes to go from that erased state back to being diffuse aurora. Having a value on that will help with future modeling of magnetic fields,” said Troyer, who is the paper’s corresponding author.

“Particles that fall into our atmosphere from space can affect our atmospheric layers and our climate,” said Dr. Jaynes. “While particles with diffuse aurora may not be the main cause, they are smaller building blocks that can help us understand the aurora system as a whole, and may broaden our understanding how auroras happen on other planets in our solar system.”

“Knowing they exist means there is a process that is creating them,” Dr. Jaynes elaborated. “It may be a process that we haven’t started to look at yet because we never knew they were happening until now.”