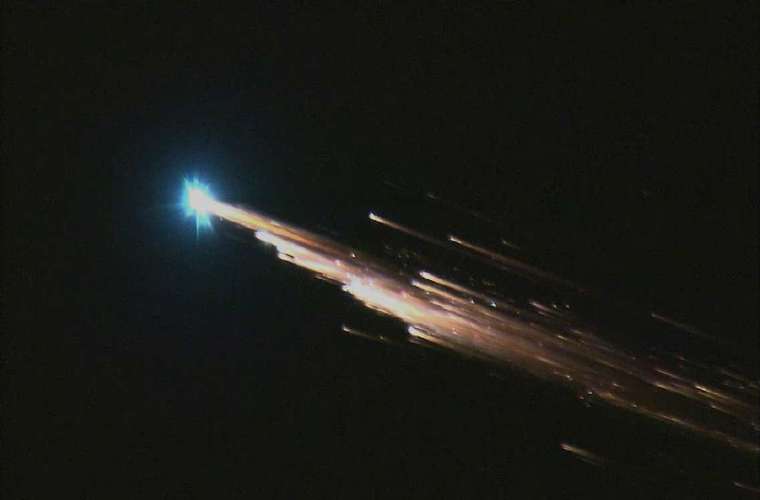 China’s Uncontrolled Long March Rocket Will Be a “Truly Spectacular,” But Reckless Show


The 100-foot, 21 Ton Spent Rocket Booster is Expected To Impact Earth This Weekend

Where the out-of-control piece of space debris will land is unknown. However, experts say the eventual reentry should create a dazzling light show as the rocket plummets to Earth.

“It will be truly spectacular,” Dr. William Ailor, a Technical Fellow with the Center for Orbital and Reentry Debris Studies (CORDS) at The Aerospace Corporation, told The Debrief. “It will start with a very bright fireball, which will break into a number of very bright fireballs, some of which will break into more, smaller fireballs. The whole process will take many seconds (meteors typically take a second or two) and cover a long path across the night sky.”

The object in question is the core stage of China’s Long March 5B rocket, which China launched on April 29 to deliver the first portion of China’s planned Tiangong space station (meaning “Heavenly Palace”).

After successfully delivering the space station’s first core module, code-named “Tianhe,” meaning “Harmony of the Heavens,” having expended its fuel, the rocket drifted away, becoming a ⅓ the size of a football field piece of space junk.

Jettisoning spent rocket boosters after a payload has been delivered is standard practice. Typically rockets are designed only to reach a parabolic suborbital trajectory, meaning a spent booster falls shortly after launch when its fuel is exhausted. This allows for the spent booster’s descent to be conducted predictably and far from populated areas. However, the Long March 5B rocket is designed to travel all the way into Earth’s orbit with its payload. When it finally separated from Tianhe Module, the Long March was left in an unstable orbit, ensuring it would eventually fall back to Earth in a completely uncontrolled and unpredictable manner.

“The fact that [China] let the core stage go into orbit reflects a lack of caring,” astronomer Jonathan McDowell of the Harvard Smithsonian Center for Astrophysics told Time. “They just decided, ‘Hey, the Earth is big. This probably won’t affect anyone.”

Tumbling through Earth orbit at roughly 17,000 mph, the Long March 5B is now expected to make its reentry sometime this weekend.

The Aerospace Corporation, a nonprofit organization that provides technical guidance and advice on all aspects of space missions to military, civil, and commercial enterprise, is currently predicting reentry for the Long March will occur May 9, at 12:19 AM (EST). U.S. Space Command’s 18th Space Control Squadron at Vandenberg Air Force Base says the rocket’s “decay epoch” should occur sometime within a 12-hour window of 10:52 PM (EST), May 8 to 4:52 AM (EST) May 9.

Ultimately, it’s impossible to say precisely when and where the Long March rocket will fall to Earth. The uncertainty stems from challenges related to the non-spherical shape of Earth and various fluctuations in atmospheric density.

Experts say the likelihood of debris from China’s discarded rocket landing in populated areas is relatively unlikely but not inconceivable.

“The probability that any random reentry will land in the ocean is about 3:4, since the Earth is about 75% covered by oceans. Also, the majority of the land mass is either uninhabited or lightly inhabited: deserts, mountains, forests, and open prairie, farms, or grasslands,” said Marlon Sorge, a principal engineer with CORDS, in an interview published by The Aerospace Corporation. “The probability that a piece of space debris will land on a city or a densely populated area is usually relatively small. What makes this reentry particularly noteworthy is that it will occur between 41.5 deg N and 41.5 deg S latitudes, where the vast bulk of the world’s population lives.”

According to Sorge, typically, 60-80% of a large object’s mass is burned off during the high-speed descent through the atmosphere. In the case of the Long March 5B, that means that roughly 9,500lbs to 18,500 lbs of the remaining rocket will likely fall somewhere on the globe.

On March 26, 2021, after one of SpaceX’s Falcon 9 rockets failed to complete its deorbit burn, remains of the rocket showered down across unexpected areas in Washington State. A pressure vessel from the rocket stage left a “4-inch dent in the soil” after landing 100 miles inland on one Washington State farm.

Though some degree of debris will almost certainly fall to Earth, experts say the likelihood of someone being struck by a piece of the Long March rocket is extremely low. “The statistical risk to any one person of being struck by falling space debris is so low that a colleague of mine jokes that if reentry predictions put his house directly under the path, he’d go out with a camera and watch,” said Sorge.

Nevertheless, experts say one thing more certain: when the Long March rocket finally falls to Earth, it will likely make for quite a spectacular light show.

When SpaceX’s Falcon 9 second stage rocket made an unexpected uncontrolled reentry on March 26, the 45-foot long, nearly 8,600 lbs spent booster created a dazzling light show in the skies over Portland and Washington State. Leaving vibrant streaks of light as hurtled through a thick portion of the Earth’s atmosphere, eyewitnesses took to various social media networks, wondering out loud if Earth was currently experiencing an alien invasion.

Measuring 122% larger and 438% heavier than the Falcon 9’s second stage, should the Long March 5B end up falling remotely close to populated areas, experts say the rocket’s violent fall to Earth will be a breathtaking sight to behold.

“The reentry breakup process happens along the ground track of the orbit, but occurs at a high altitude, so it could be visible to people many miles away,” Dr. Ailor told The Debrief. “And actually, it’s relatively rare for people to see reentries since many occur over water.”

Though the Long March will clip through the atmosphere at an approximate blistering speed of 18,000 mph, this is still a fraction of the average rate meteors travel, meaning the rocket’s reentry should be visible considerably longer than a meteor or fireball.

“The reentry velocity of the stage, ~18,000 miles/hr, is much slower than that of a typical meteor (some enter at over 100,000 miles/hr) and debris from low Earth orbits enters at a much shallower angle than a typical meteor,” explained Dr. Ailor. “Those two factors make reentry events last longer and cover more of the sky than typical meteor events.”

Dr. Ailor also noted that should the Long March fall near any populated areas, those nearby could hear the thundering roar of a sonic boom as pieces of the rocket falls through the air faster than the speed of sound.

In late February 2021, thousands of citizens in the United Kingdom were suddenly startled by the roar of a sonic boom and “sizzling” coming from the sky after a historic fireball came down near Winchcombe, Gloucestershire.

Odds are the falling Long March will not result in catastrophe, and at best, it may provide a brilliant light show. However, the rocket’s uncontrolled descent is representative of a more significant problem.

Concerns with Earth’s atmosphere quickly turning into a landfill of artificial space junk is something The Debrief has previously reported. Just recently, astronauts making their way to the International Space Station had a brief scare when officials at U.S. Space Command raised alarms that their SpaceX Crew Dragon spacecraft was on a potential collision course with a piece of space junk.

The unease and uncertainty of the Long March’s reentry serve as a reminder that what goes up must come down. When the expected fall of space hardware is done in an uncontrolled manner, no matter how slight, the risk to life and property is ever-present.

For their part, China has a history of being highly secretive and reckless in its space endeavors.

In their first attempt at putting a prototype space station, after five years of being in orbit, China lost contact with the Tiangong-1 (meaning “Heaven’s Palace”) in 2016. In 2018, the out-of-control experimental crewed laboratory and testbed crashed into the Pacific Ocean near Tahiti. In May of 2020, another derelict Long March 5B rocket flew directly over Los Angeles and New York City before finally showering debris along the Ivory Coast of Africa.

One of the reasons out-of-control space debris endangering Earth is rarely discussed is because “the problem is quite solvable,” Harvard’s Jonathan McDowell told The Atlantic. “Just don’t build your rocket, as China did, to reach orbital velocity and start zooming around,” said McDowell.

Recently, The Debrief profiled twelve different significant uncontrolled reentries of satellites or spacecraft larger than 4 tons from 1978 to 2020. Once this latest Long March 5B finally comes down, it will make the fifth uncontrolled reentry by China’s National Space Administration since 2016.

With Russia, China, and the U.S. currently engaged in what some have called a “scary new space race,” it’s easy to assume the increased militarization of space will also increase the likelihood of more dangerous debris falling to Earth in the near future. While this may still end up being true, Dr. Ailor told The Debrief that the commercialization of space poses a more significant concern than national governments at present.

“The biggest development is the number of commercial satellites (i.e., SpaceX and others) being launched into space,” said Dr. Ailor. “The more satellites that are put into low Earth orbits, the more reentries we’ll see. And current best practices call for the really large objects to be purposefully reentered into safe regions (e.g., South Pacific Ocean) where there are very few people and aircraft.”

At a press conference on May 7, spokesperson for China’s Foreign Ministry, Wang Wenbin, said China was “following closely the upper stage’s reentry into the atmosphere.”

“To my knowledge, the upper stage of this rocket has been deactivated, which means that most of its parts will burn up upon reentry, making the likelihood of damage to aviation or ground facilities and activities extremely low,” said Wenbin. At another press conference a day prior, Wenbin said, “China is always committed to the peaceful use of outer space.”