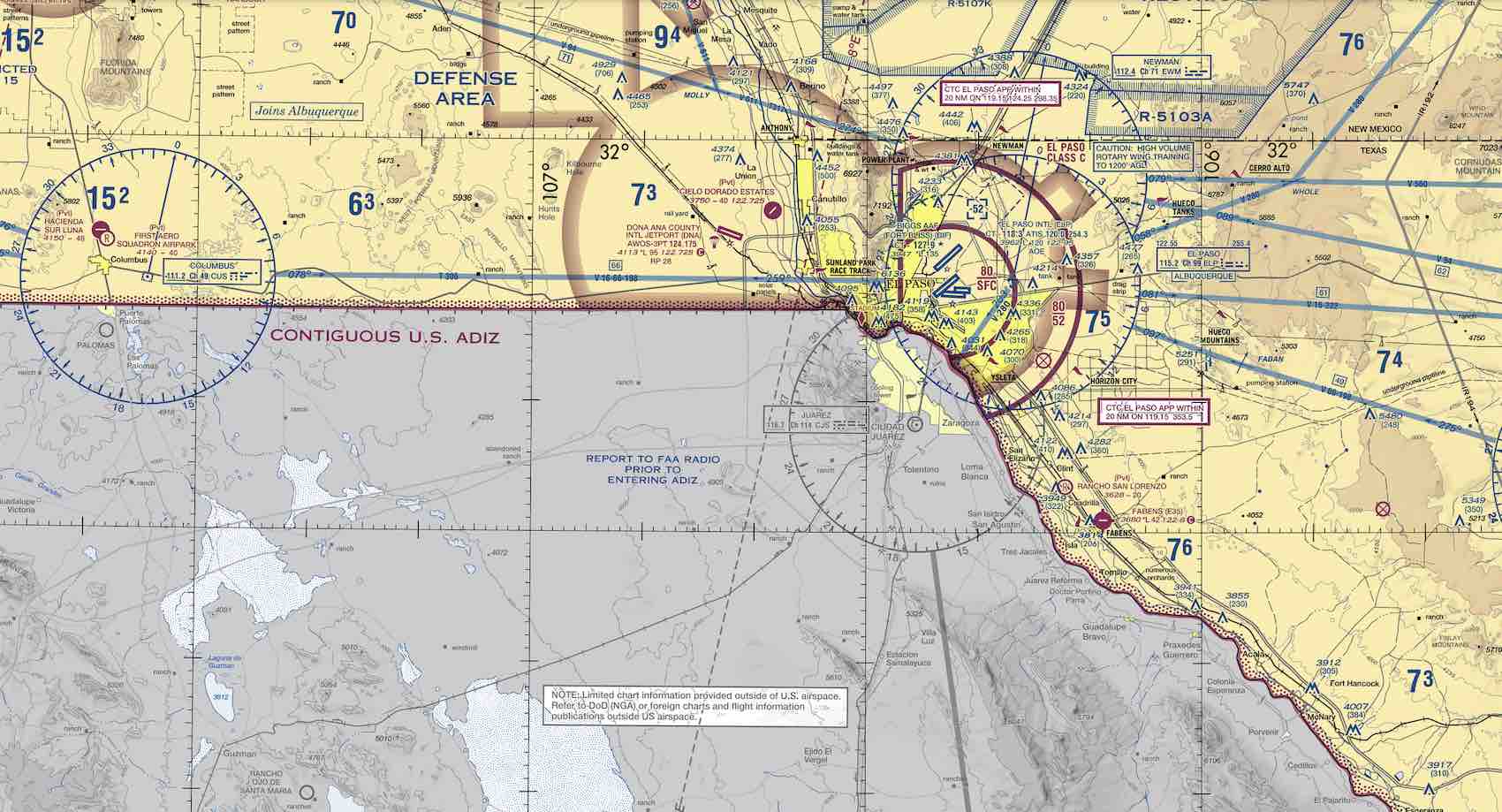 The Federal Aviation Administration (FAA) has chosen to remove areas outside the United States on all its visual flight rules (VFR) aeronautical charts, according to a notice the agency issued late last year.

“Effective with the December 29, 2022 chart editions, areas outside of the U.S. shall be skeletonized on all VFR aeronautical charts,” the notice reads.

“Cultural features, hydrographic information and geographic relief shall be retained in subdued and different shades of gray,” the notice also said. “Only major airports, NAVAIDs and airways shall be charted in foreign areas. These will be in screened black.”

The new charts do include information related to roadways, cities and other urban areas, and topography related to regions outside the U.S. Larger airports are included on the charts as well but are featured now as circles bearing only a name and other identifying information in the absence of runway information, data on weather systems, air traffic control, or tower frequencies featured on past versions.

The notice, issued by the agency’s Aeronautical Information Services division on October 12, 2022, and addressed to all “Users of VFR Aeronautical Charts,” was implemented on December 29, 2022. No further details on the decision to remove the information from the FAA’s aeronautical charts were provided at that time.

The Debrief reached out to the FAA for additional details about the decision to remove foreign information from its sectional charts.

“The FAA implemented a new 56-day cycle for publishing visual charts to provide more frequent updates,” an FAA spokesperson told The Debrief in an email. “This reduces the need to issue chart-related Notices to Air Mission (NOTAMs) and chart bulletins.”

Previous aeronautical charts issued by the agency included aeronautical data for regions outside the U.S. comparable to that existing within its borders.

Given the amount of international air travel the U.S. shares with its nearest neighbors, the removal of foreign information from its aeronautical charts could likely arouse concerns among some aviation professionals, who might view the exclusion of this information from FAA aeronautical sectionals as a step backward.

However, in its statement provided to The Debrief, the FAA further clarified that its visual charts do provide guidance on where aviators are advised to find aeronautical information for areas outside the United States.

“The visual charts specifically direct pilots flying in international airspace to use aeronautical charts and publications from that country’s aviation authority for the most current verified depictions,” the FAA spokesperson said.

Prior to the issuance of the notice last October, the publishing cycle for aeronautical information updates by the FAA had been between 168 days and two years.

The agency says its decision to update the information conveyed in its sectionals, as outlined in the October notice, followed previous engagement by the FAA in “outreach on Foreign Data Depictions” for its aeronautical charts that began in 2020.