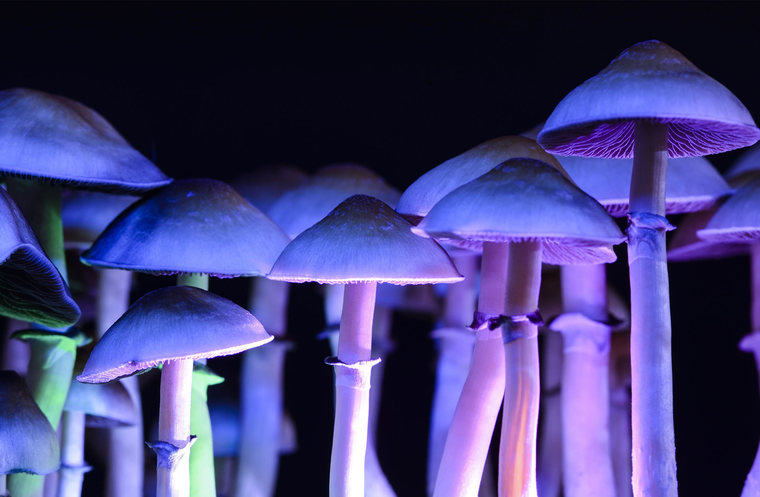 In a study just published in the journal Neuron, researchers from Yale University found that mice who were given a single dose of the psychedelic drug psilocybin showed immediate and long-lasting increases in neural connections.

Psilocybin is a psychedelic compound naturally produced by more than 200 species of fungi. When consumed, the drug produces mind-altering effects, including feelings of euphoria and hallucinations. Humans have consumed mushrooms containing psilocybin to induce perceived spiritual experiences or for recreational use for thousands of years.

In recent years, psychedelic drugs, including psilocybin, have been the focus of increased study as possible treatments for mood disorders such as depression, anxiety, or addiction. The bulk of these studies have shown psychedelic therapies to significantly lower anxiety and depression in patients. However, this recent study represents one of the first times researchers have quantitatively measured the positive and long-lasting effects psilocybin can have on neural connections in the brain.

“We not only saw a 10% increase in the number of neuronal connections, but also they were on average about 10% larger, so the connections were stronger as well,” said Dr. Alex Kwan, senior author of the paper and associate professor of psychiatry at Yale.

BACKGROUND: What is the History of Psychedelic medicines?

Some archeologists attribute the earliest known evidence of psilocybin use by humans to 8,000-year-old Neolithic pictographs found near the town of Villar del Humo in Spain. Researchers say images interpreted as mushrooms are likely Psilocybe hispanica, a mushroom species native to the area containing the hallucinogenic psilocybin.

In western cultures, the use of psychedelics for medicinal purposes wasn’t seriously examined until 1943, when Albert Hofmann discovered how to synthesize the chemical compound lysergic acid diethylamide or LSD. One of the most prominent early champions for the therapeutic use of LSD and psilocybin was Harvard psychologist Timothy Leary. Leary, who became a counterculture icon of the 1960s, said psychedelics offered a profound and unparalleled positive impact on people’s moods and general outlook on life.

Governments concerned by widespread recreational use of LSD and psilocybin pushed back on any claimed benefits of psychedelic drugs, making serious scientific research extremely difficult.

In 1970, all medicinal applications of psychedelics stopped entirely in the U.S. with the passage of the Controlled Substances Act. Psychedelics were considered a “Schedule I” substance, meaning the compounds possessed “significant potential for abuse and dependence” and had “no recognized medicinal value.”

With the advent of new brain imaging technologies, such as PET and MRI scanning, in the early 2000s, there was a renewed interest in clinical research of psychedelics for psychiatric use.

In 2016, John Hopkins University and New York University conducted an extensive randomized, placebo-controlled study to measure the therapeutic benefits of psilocybin. Results showed the use of psilocybin demonstrated “substantial and sustained decreases in depression and anxiety” in patients suffering from terminal cancer. Notably, researchers found no instances of adverse effects from using psilocybin.

ANALYSIS: What Does The Recent Psilocybin Research Show?

In previous research, the positive effects of psilocybin have been primarily attributed to patients’ subjective feelings of having a “mystical experience” that favorably altered their outlook on life and existence. In clinical trials, patients suffering from terminal illness reported having reduced fear of dying after psilocybin use due to feelings of having a renewed or enhanced recognition of existential meaning.

With this recent study by Yale scientists, researchers now have hard data showing that psilocybin not only can benefit a user’s general mood and disposition, but the psychedelic substance also produces positive neurological changes in the brain.

Researchers say within 24 hours after the administration of psilocybin to lab mice, laser scans began showing notable increases in the number and size of dendritic spines. Additionally, when subjected to stress, the mice showed behavioral improvements and increased neurotransmitter activity after being given psilocybin.

“It may be the novel psychological effects of psilocybin itself that spurs the growth of neuronal connections,” said Dr. Kwan in a press release issued by Yale.

OUTLOOK: What Comes Next In the Study of Psilocybin?

Currently, personal use or possession of psilocybin and other drugs labeled as “hallucinogens” are banned by U.S. federal law and legally considered to offer no known therapeutic benefits. In 2018, researchers from Johns Hopkins University said that if psilocybin clears phase III clinical trials, psilocybin should be re-categorized from a Schedule I drug to Schedule IV, making it on par with anti-anxiety medications or prescription sleep aids.

“We should be clear that psilocybin is not without risks of harm, which are greater in recreational than medical settings, but relatively speaking, looking at other drugs both legal and illegal, it comes off as being the least harmful in different surveys and across different countries,” said Dr. Matthew Johnson, an associate professor of psychiatry and behavioral sciences at the Johns Hopkins University School of Medicine.

Psilocybin is currently undergoing phase III clinical trials, with up to 3,000 participants being used to compare psilocybin against existing medications for treating major mood disorders. Psilocybin must pass stage III trials before it can be petitioned for reclassification or approved by the FDA. “We expect these final clearance trials to take place in the next five years or so,” Dr. Johnson told Johns Hopkins University’s press office in 2018.

As medical researchers await the conclusion of clinical trials, these recent results from Yale scientists now offer proof of tangible neurological benefits associated with the use of psilocybin.

Given the anatomical, physiological, and genetic similarities between mice and humans, there’s certainly reason to be more than hopeful that similar neurological benefits would similarly translate to human psilocybin users.

Arguably, the most significant finding by Yale scientists wasn’t merely the initial positive changes psilocybin had on the brain. Instead, mice showed long-lasting improvements in neurotransmitter activity for well over a month after taking psilocybin.

“It was a real surprise to see such enduring changes from just one dose of psilocybin,” said Dr. Kwan. “These new connections may be the structural changes the brain uses to store new experiences.”