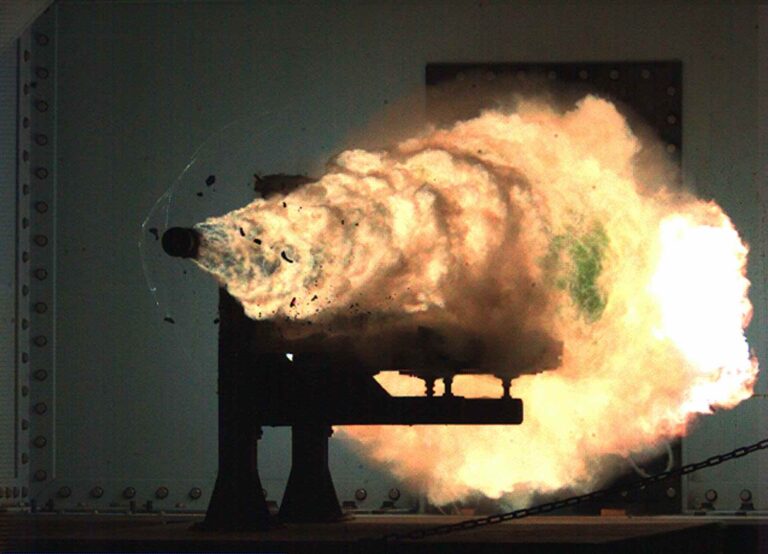 The U.S. Navy has Laid Development of its Hypersonic Railgun to Rest

Some sad news for fans of unconventional military technology reached us this week. While this development had been rumored and expected for some time now, the United States Navy has officially abandoned the development of its hypersonic railgun after more than a decade of development and half a billion dollars in research investment.

The weapon was able to fire a metal projectile at hypersonic speeds in excess of Mach 7 with a range of slightly more than 100 miles. But when the Navy’s last budget request included no funding for the continued development of the railgun, the writing seemed to be on the wall. And now it’s official. As defense analyst Matthew Caris recently told the Associated Press, “The railgun is, for the moment, dead.”

SO WHAT IS (OR WAS) A RAILGUN

The railgun is essentially another type of cannon, though of a massively powerful design. But rather than using gunpowder or chemical accelerants to propel a projectile out of a barrel, the railgun uses vast amounts of electromagnetic energy to drive a steel projectile along a pair of rails (hence the name) and up into the air.

The advantages of a railgun that made it desirable for the Navy are several. Ships would need to carry far less gunpowder or other types of fuel as part of their weapons system, offering a benefit in terms of safety. Also, the steel projectiles are cheaper than rockets and similar types of ordinance by a factor of 100, offering a budgetary advantage. And the amount of damage a very heavy steel object can do when traveling at Mach 5 (the projectile’s final velocity at maximum range) is on par with what most conventional missiles can deliver.

Here’s a brief video the Navy released in 2017 showing one of the prototypes firing multiple rounds. It also offers a good look at the automated reloaded system under the weapon.

IF THE WEAPON WAS SO WONDERFUL, WHY ABANDON IT?

A combination of factors appears to have doomed the railgun’s prospects. The Navy’s general theory of modernization evolved during the project’s development. The Pentagon is currently focusing more on a new generation of hypersonic missiles. These include the Common Hypersonic Glide Body (C-HGB), which can theoretically reach speeds of Mach 17 with a range more than three times that of the railgun.

The range is important because the railgun’s maximum range would place warships within striking distance of missile systems already in use by the Russians and the Chinese. Also, the next generation of hypersonic missiles offer the possibility of in-flight course correction and maneuverability during combat. The railgun is strictly ballistic in nature. Once the projectile is fired, it’s stuck on its planned course unless it collides with something.

In addition to those factors, the reality is that the prototypes of the railgun produced by the Navy simply weren’t very good. It’s maximum rate of fire was quite slow compared to other weapons systems. It also tended to damage itself quickly. Existing cannons can be fired hundreds, if not thousands of times before the barrel needs refurbishment or replacement. The railgun prototypes could be fired at most two dozen times before becoming unusable.

SO WE WON’T HAVE A FUTURE WITH RAILGUNS IN IT?

The future of the railgun in the American military is uncertain. A Navy spokesperson said that all the research, project materials and prototypes are being preserved if the Pentagon decides to revisit this technology in the future. But America isn’t the only country that’s been tinkering with a railgun.

China has been in a race with the United States to perfect a ship-mounted railgun that looks remarkably similar to ours (funny how that happens, eh?). They still claim to be on track to have it in production by 2025. Whether they will be able to overcome the technical challenges the United States encountered remains unknown. But if nothing else, the research that went into this effort was fascinating and the resultant technology may find some other use in the future.

The following video contains a slightly more thorough explanation of how the railgun works, along with some additional test-firing footage.