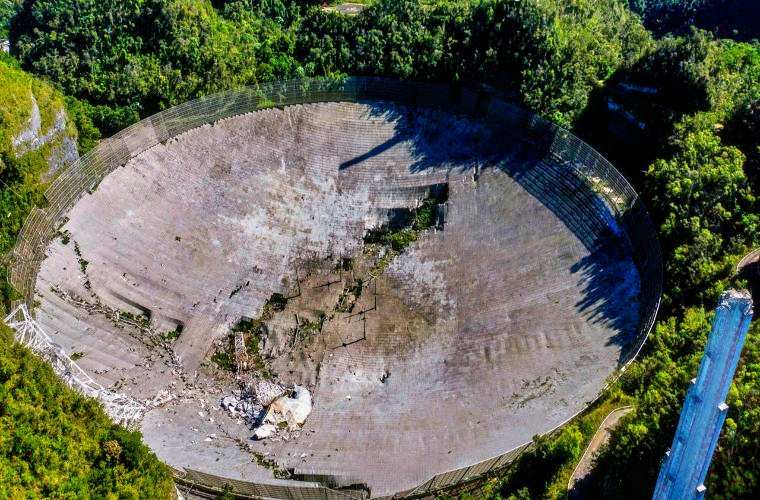 The fate of the famed radio astronomy telescope in Arecibo, Puerto Rico, has been in limbo since it first started to fall apart in August of 2020, leaving researchers who depend on its relatively unique capabilities with few options, as well as no clarity on the facility’s long term future.

Initial plans to reinforce and rebuild suffered a fatal blow when the observatory platform fell into the main dish a few months later, causing even more damage and ultimately leading to a December 2020 decision to demolish the telescope altogether.

Now, the National Science Foundation, which owns the facility and funds its operation, has issued a review searching for options, including possibly rebuilding an entirely new facility on the same site. Estimates for that proposed effort run into the hundreds of millions of dollars, and any money would have to be approved by the U.S. Congress, but the new NSF review may offer a glimmer of hope.

“The ball is rolling at least,” Chief researcher Able Mendez told The Debrief about the recently released review, “but still that funding [by Congress] has to go through.” 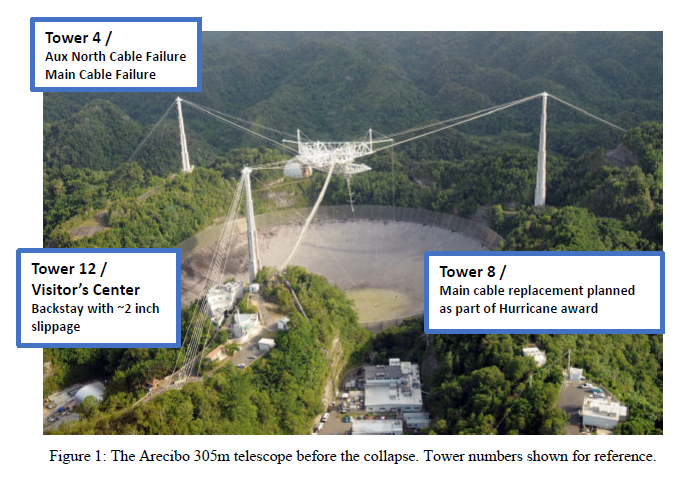 First constructed in 1963, few if any ground-based observatories are as famous or instantly recognizable as Arecibo.

With appearances in blockbuster films like the 1995 James Bond classic Goldeneye or the 1997 love letter to the search for extraterrestrial intelligence Contact, not to mention sending the first interstellar transmission back in 1974, the facility also made a name for itself in 1992 when it discovered the first planet orbiting another star.

Since then, and until its recent collapse, the world-renowned facility has been more or less in continuous operation, gathering data about distant stars, exoplanets, and even tracking meteors using its unique, built-in RADAR system.

“It was the most powerful radar in the world,” Mendez told The Debrief,” so we lost something big that is not available elsewhere.”

Mendez also notes that Arecibo’s one-of-a-kind combination of sensitivity and frequency range would be hard to replace, stating that if not for a fluke storm, it may have taken a picture of interstellar mystery object Oumuamua, which he says was at the limit of the array’s detection limit, as it passed through our solar system back in 2017.

“What a coincidence of life,” Mendez told The Debrief, “that the only instrument that was capable, at least in theory, to get the actual shape of the object [Oumuamua], actual picture from radio bounce, it was not operational because of a hurricane.”

Analysis: Can we Rebuild Arecibo Observatory?

Some help for beleaguered researchers has recently arrived from the Chinese government, whose 2019 plan to allow foreign research teams access to their 500-meter FAST array telescope finally kicked in on April 1st of this year. And according to a recent press release, “an allotted timetable [for foreign usage] will be available by Aug. 1”.

Still, even that facility will only allow 10% of its usage time to outside researchers, leaving those who depend on Arecibo to pen a white paper in February 2021, prompting the current NSF review and subsequent order by Congress.

A March 3, 2021 update on the NSF website states that the organization has provided a report to Congress, “as required by the report language accompanying the Consolidated Appropriations Act, 2021, describing the causes and extent of the damage, the plan to remove debris in a safe and environmentally sound way, the preservation of the associated AO facilities and surrounding areas, and the process for determining whether to establish comparable technology at the site, along with any associated cost estimates.”

That same update indicates that “the investigation of the collapse and exploration of future opportunities for Arecibo is ongoing.”

Of course, before any future plans for a possible rebuild can get underway, there is a ton of clean-up needed at the site. The report estimates the final tally for that clean-up effort “will be in the range of $30-$50 million, spread over fiscal years 2021 and 2022.” For reference, that cost alone is several times the typical annual operating budget of the observatory.

Once the clean-up is done, the new facility proposed in the white paper is currently targeted to cost somewhere in the neighborhood of $450 million. And according to Mendez, that construction process could take anywhere from three years to as much as ten. However, he notes, even though funding of this magnitude would most likely need to come from Congress, Puerto Rican officials are fully committed to the idea of a new facility.

“The government of Puerto Rico is very interested in keeping the Arecibo Observatory running, with a big telescope,” Mendez told the Debrief. “They want to give all support necessary.”

This support, he indicated, may even include money to improve the road leading to and from the remote facility, which he said was taking a pounding during the ongoing efforts to clean up the site.

Outlook: Where there is a will…

Keeping track of the situation, possibly with an eye to becoming more involved in the future, is one particularly intriguing party; NASA.

Your Skin Can Power Your Future Fitbit, New Study Says

“We’re not directly involved with the recovery and clean-up of the site,” said Lindley Johnson, the head of NASA’s Planetary Defense Coordination Office at a March 1 meeting of NASA’s Planetary Science Advisory Committee, “but we’re tracking with them closely and want to be involved in what the future of the Arecibo Observatory can be.”

Johnson also indicated that NASA is in preliminary discussions with the newly formed U.S. Space Force about how a rebuilt Arecibo might support their efforts, something those in favor of rebuilding have already previously proposed.

Mendez did indicate to The Debrief that should Congress fail to come through, fall back options for more funding may include approaching the notoriously deep-pocketed DoD directly to see if there is mutual interest or even possibly forming a coalition of research facilities and universities from around the globe to try to fund the program themselves.

However, he did admit that these were only ideas at this stage and not formal plans.

Given the proposed budget, it will likely still come down to Congress to appropriate such a large sum. Still, some researchers believe that the Arecibo Observatory has already cemented itself in history regardless of what happens.

“Arecibo was sui generis among radio telescopes,” SETI researcher Seth Shostak told The Debrief back in December, “and hearing that it will be demolished was akin to learning that my high school was going to be torn down. The memories will remain, and radio astronomy will shift to newer instruments, but the heavyweight champion is hanging up his gloves.”

The NSF report indicates some of their test results on recovered materials aren’t expected until the end of 2021, so a final conclusion from Congress on what to do next is likely months away. Until then, researchers and fans alike will surely hope Shostak’s assessment is premature, and this particular heavyweight champ will somehow get a chance to fight another day.