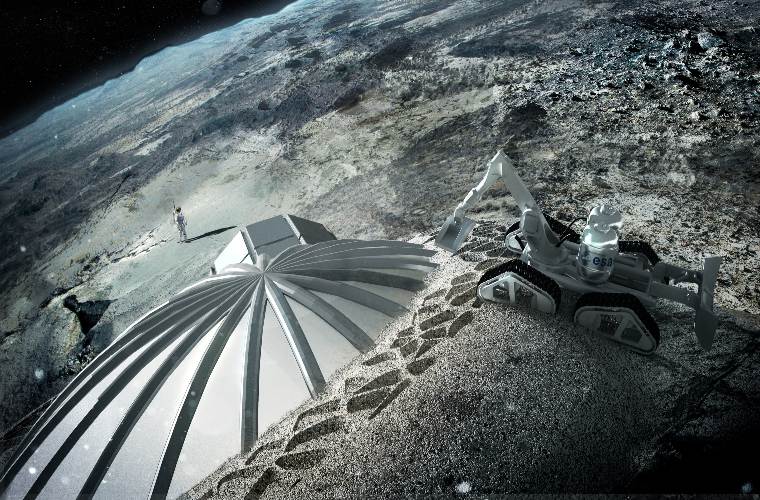 A team of researchers at the University of Arizona’s College of Engineering plans to advance space-mining methods using swarms of autonomous robots.

With a fund of $500,000 from NASA, the team is carving the path for the future of space-mining, an area of exploration that is rapidly gaining momentum.

“It’s really exciting to be at the forefront of a new field,” said Moe Momayez, interim head of the Department of Mining and Geological Engineering and the David & Edith Lowell Chair in Mining and Geological Engineering. “I remember watching TV shows as a kid, like ‘Space: 1999,’ which is all about bases on the moon. Here we are in 2021, and we’re talking about colonizing the moon.”

Background: What is space mining?

Space mining is mining for resources on non-Earth bodies, like the moon. In doing so, astronomers can utilize what’s already there to construct bases and other structures instead of transporting building materials from Earth.

The need for space mining is being compounded by the re-energization of space travel from the private sector. With billionaires like Richard Branson and Jeff Bezos taking quick excursions into orbit this past year, space looks like the new frontier for capitalism.

In 2019, at an invite-only press event in D.C., Bezos shared his vision of moving heavy industry and mining into space. His idea includes a constellation of space stations using centrifugal force to produce artificial gravity and harvesting sunlight to grow crops. Moving industry to space would free up room down here on Earth for humans to keep surviving.

So you may be wondering, what’s even out there for us to mine?

The most attractive resource to us humans is water. With a little help from solar energy or nuclear fission, water molecules can be broken down into hydrogen and oxygen to make rocket fuel, allowing in-space refueling.

Researchers are also hoping to find rare earth elements, materials critical to producing electronic goods that are both difficult and expensive to extract.

The moon proves to be a great place to launch this expedition of space mining for several reasons: first, it’s relatively close to Earth, with a very short travel time; and second, its low gravity suggests that relatively little energy expenditure will be needed to send the mined resources back to Earth.

Notably, the moon contains a decent amount of water ice in its craters. When compared to Earth, the moon is certainly looking dry and crusty, but this discovery of water is essential in space mining nonetheless.

The moon also contains helium-3, as deposited by solar winds. Helium-3 is a light stable isotope of helium that serves as a potential fuel source for future fusion reactors.

Mining on Earth is already tedious and challenging work; obviously, mining on the moon is significantly more complicated. Like, out-of-this-world complicated. Cue the robots!

Jekan Thanga, an associate professor of aerospace and mechanical engineering at the University of Arizona, is developing a neuromorphic learning architecture technique he calls the Human and Explainable Autonomous Robotic System (HEART).

With this system, Thanga seeks to train robots to mine, excavate, and even construct. The research team plans to build and train these robots on Earth, sending them off to space once they can carry out these functions without needing to receive instructions.

“In a sense, we’re like farmers. We’re breeding talent out of these creatures, or a whole family of creatures, to do certain tasks,” Thanga said. “By going through this process, we help perfect these artificial creatures whose job it is to do the mining tasks.”

Not only will the robots help make space mining easier, but they’re also streamlining the process. Astronauts can devote more of their time to focus on other critical mission elements.

“The idea is to have the robots build, set things up and do all the dirty, boring, dangerous stuff so that the astronauts can do the more interesting stuff,” Thanga said.

Outlook: What’s next for space mining?

As a Hispanic-serving institution, the University of Arizona was eligible to receive funding for the team’s project through NASA’s Minority University Research and Education Project Space Technology Artemis Research Initiative. But they’re not the only group focused on space mining that’s won the support of NASA.

These deals mark the era of commercial space resources extraction, which implies that somewhere down the line, governments will need to step in to create policies and legal frameworks.

As it currently stands under the Outer Space Treaty, the definitive document of international space law, no part of outer space can be appropriated by national governments. But as commercial interest in space takes off and more industries start to see the value in extracting resources from space, friendly relations might cease to exist in the exosphere.