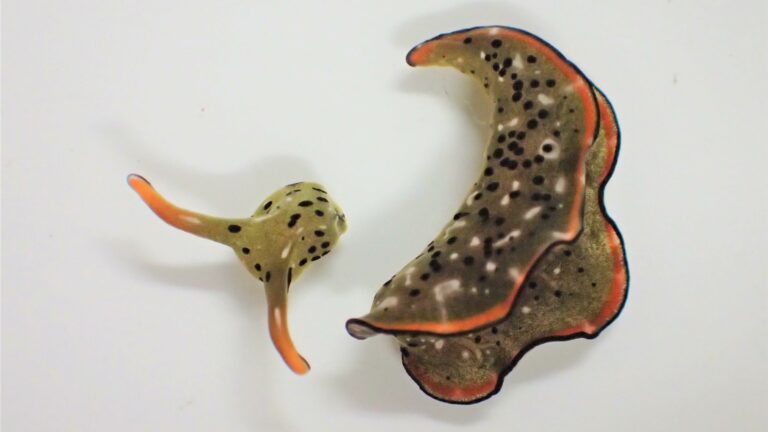 Scientists from Nara Women’s University in Japan have discovered two species of sacoglossan sea slugs that can sever their heads and regrow entirely brand-new bodies.

Examples of animals that can regenerate new tissue to restore a part of the body that has been lost or damaged can be found throughout the animal kingdom. Certain insects, worms, fish, or lizards can all regrow portions of their body that have been lost.

However, scientists’ recent findings are unique because the sea slugs in question purposefully shed their heads and then regenerate an entirely new body completely with heart and other internal organs.

Reporting their findings in the journal Current Biology, researchers say the discovery represents a new type of autonomy, showing a species of animal that possesses a complex biological structure capable of surviving even when most of its body has been lost.

“We were surprised to see the head moving just after autotomy,” said Sayaka Mitoh of Nara Women’s University in Japan in a press release. “We thought that it would die soon without a heart and other important organs, but we were surprised again to find that it regenerated the whole body.”

Scientists made the discovery of these sea slug’s zombie-like superpower by total accident.

While working in the lab of Yoichi Yusa, which raises sea slugs from eggs to study their life-history traits, Ph.D. candidate Sayaka Mitoh was surprised to find one of the sacoglossan slugs was moving around without a body.

Not only was the sea slug head cheating death and moving around on its own, but within hours of shedding its body, it began to feed on algae. Researchers were further shocked when, within days of cutting off its head, the wound at the back of the neck closed, and the slug began regenerating a new heart. Within three weeks, the slug had regrown an entirely new body.

To determine whether they had a single slug with superpowers, or was the ability to regenerate a new body something all sacoglossan sea slugs could do, scientists examined various types of laboratory-bred and field-collected marine gastropod mollusks.

Researchers found that two species of sacoglossan slugs autotomized – purposefully removed their heads from their bodies – and began to regenerate a new body exactly like what was previously observed.

Scientists found that these particular species of shell-less mollusks have a specific groove in their necks that allow the slugs to detach their heads from their bodies. Scientists termed this groove the “breakage plane.”

By tying a thin nylon string around the breakage plane of six Elysia cf. marginata sea slugs, within a day, scientists noted five removed their heads, with one of the slugs even performing the incredible feat twice during observation.

During the study, researchers found that the heads of older slugs often did not feed on algae, typically dying within ten days of shedding their bodies. In these instances, the headless bodies of older slugs still moved and reacted to being touched until the point of death.

Why The Slugs Cut Their Heads Off Still a Mystery

Research authors, Mitoh and Yusa, aren’t entirely sure why these species of sea slugs evolved the ability for large-scale autotomy.

Most animals are believed to automize loss of body parts as a defensive mechanism. However, researchers note that adult sacoglossan sea slugs have few predators due to their “cryptic coloration and presence of toxic chemicals incorporated from their food.”

Researchers also point out the slow-moving slug’s “extreme autonomy” takes several hours, making it hardly an effective defense against predation. Equally, imitated predator attacks in the lab did not induce the slugs to cut-off their heads.

The leading theory is the slug possesses this remarkable ability as a means of removing internal parasites. In lab tests, all slugs which had parasites beforehand were observed to be parasite-free with their new bodies.

How the sea slug species manages to grow new bodies from nothing more than a head is also unclear.

Researchers suspect the slugs use a symbiotic phenomenon known as kleptoplasty, in which the slugs incorporate chloroplasts from algae into their severed heads to stay alive and ultimately grow a new body.

In these particular species of sea slugs, a highly branched digestive gland is spread over most of its body, including the slug’s head. Researchers hypothesize this allows the slugs to obtain enough energy for survival and regeneration, even when they don’t possess digestive organs.

Ultimately, more extensive study is needed to conclusively determine how and why the slugs can achieve such remarkable regeneration.

“As the shed body is often active for months, we may be able to study the mechanism and functions of kleptoplasty using living organs, tissues, or even cells,” Mitoh said. “Such studies are almost completely lacking, as most studies on kleptoplasty in sacoglossans are done either at the genetic or individual levels.”

Make sure to follow us on Flipboard for exclusive content and the latest news on breakthrough science and disruptive technology!