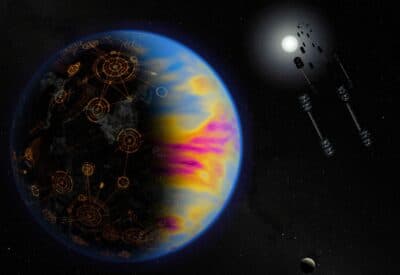 Aliens May Pollute and That Will Help Us Find Them

A new NASA study hypothesizes that one of the best ways to find evidence of possible alien technology on exoplanets is to look for their pollution.

“Nitrogen dioxide is one of the main pollutants in industrialized locations on the globe,” NASA astrobiologist Dr. Ravi Kopparapu, one of the study’s authors, told The Debrief. “They can be produced by combustion processes such as vehicle emissions and fossil-fueled power plants.”

In December, The Debrief published an article about a small collective of scientists looking for alien technosignatures.

“Technosignatures refer to any evidence of technology that could be remotely detectable, specifically through the tools of astronomy,” Dr. Jacob Haqq-Misra, an astrobiologist and senior research investigator at Blue Marble Space Institute of Science, told The Debrief in December. “Radio signals are one example of a technosignature but not the only one. Other examples are city lights, surface modifications (cities and large-scale deployment of solar panels), changes in the atmosphere (greenhouse gases like CO2 as well as industrial byproducts like CFCs and NO2), free-floating spacecraft, megastructures (i.e, Dyson spheres/swarms), and other possibilities.”

NASA has allocated resources to the search for technosignatures by funding conferences and studies that will systematically create a body of research on the subject.

In 2012, Kopparapu and Haqq-Misra published a paper about the challenges in detecting possible non-human artifacts in our solar system. The two, along with NASA astrophysicist Dr. Dawn Gelino and others, host conferences on the subject, and they are growing in popularity.

NASA and other research organizations have also made the hunt for extraterrestrial life a priority for the James Webb Telescope when it is launched in October 2021. The advanced telescope will focus on the TRAPPIST-1 solar system and concentrate on four planets in that system, TRAPPIST 1b, 1d, 1e, and 1f. Several astrobiologists believe that these planets have the right conditions for the possible development of life.

“On Earth at least, Nitrogen dioxide produced by human civilization is roughly 3 times higher than biology and natural sources,” Kopparapu told The Debrief.

In the study, Kopparapu and his team used computer simulations to predict whether nitrogen dioxide (NO2) pollution would be visible to Earth-based telescopes. In simple terms, NO2 absorbs wavelengths of visible light (colors) when present in a planet’s atmosphere, and those color changes can be detected by observing the planet as it reflects light from its star. The team states that an Earth-like planet orbiting a star like our Sun, and is home to a civilization producing a similar amount of NO2 as we are, can be seen from about 30 light-years away.

“So if we observe a planet with NO2, we need to first make sure that we accounted for all biological explanations. If even then there is excess NO2, we should be cautiously optimistic about the possibility of a technological source,” Kopparapu stated. “Ideally, we will also need to detect another artificially produced gas that goes with NO2 to have a robust confirmation. In the absence of that additional evidence, we should be very careful about the nature of where the NO2 comes from.”

There is a slight catch. The team’s best simulation models were based upon telescopes still in development, such as the LUVOIR and the HabEX. Moreover, Kopparapu admits that the study used 1-dimensional models for the study for the sake of simplicity.

“The next step is to do this work using 3-dimensional models…Nitrogen dioxide features can be mimicked by clouds or haze particles. So we have to really understand how much confusion these clouds and particles cause when we observe a NO2 signal,” Kopparapu explained. “And because planets are 3-dimensional objects, and things such as clouds can be accurately studied in 3-d models, our plan is to work with 3-d models going forward.”

OUTLOOK: Hope Springs Eternal, and so does Pollution

“At present, we have no [exoplanet] contenders yet. Perhaps all Habitable Zone planet candidates are contenders. We will know once we observe them,” Kopparapu concluded.

With missions to Mars focused on finding evidence of life and with humanity’s interest in space at an all-time high, it stands to reason that NASA will allocate resources to the search for life elsewhere in the cosmos. While we have yet to find alien life, the fact that astrobiologists are working on it should give one hope. Using pollution to find possible alien technology is an elegant method to solving this riddle, but if they are terrible polluters, are they someone we really want to meet?