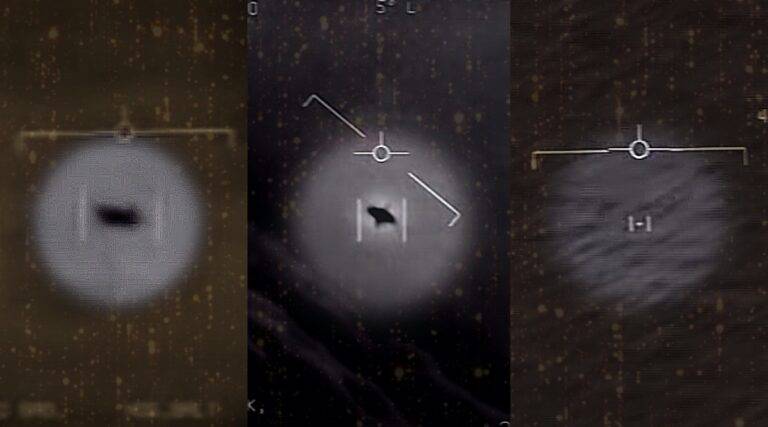 UFOs Are Still a Mystery, and 2020 Showed Us the DoD is Paying Attention


2020 has seen many advances related to UFOs, but the subject remains a historical mystery and a challenge to science.

“I know that neither Russia nor this country had anything even approaching such high speeds and maneuvers,” Hillenkoetter was quoted saying.

It would not be the last time a former CIA director would comment on the perennially controversial topic of UFOs, as recent days have shown. Within the final weeks of 2020, former CIA director John Brennan also weighed in on the subject, during a podcast interview with George Mason University economics professor Tyler Cowen.

“I’ve seen some of those videos from Navy pilots,” Brennan told Cowen, “and I must tell you that they are quite eyebrow-raising when you look at them.”

“I think some of the phenomena we’re going to be seeing continues to be unexplained,” Brennan added, “and might, in fact, be some type of phenomenon that is the result of something that we don’t yet understand and that could involve some type of activity that some might say constitutes a different form of life.”

If there is a lesson to be gleaned from history in relation to this, it would be that neither of these former CIA directors—Brennan, nor Hillenkoetter before him—seemed to have been aware of what the source of UFOs that were reported by members of the military during their respective tenures with the CIA had been. With an issue so potentially concerning as the presence of unrecognized aerospace technologies operating in U.S. airspace, it is also no wonder why 2020 saw the most significant increase in attention by the Department of Defense toward UFOs that has been witnessed in decades.

UFOs: Ours, or Theirs?

Hillenkoetter was also not the last to suggest that some of the objects appeared to display capabilities that far exceeded anything in the arsenal of U.S. adversaries, let alone the best spy planes and other aircraft taking off from runways here stateside. Despite this, more recent appearances of aerial objects of unknown origin, as depicted in a series of Navy videos authorized for release by the DoD earlier this year, have been touted by many as either being a form of secret U.S. technology, or perhaps that belonging to another nation.

“I worked with guys that went to Groom Lake every day, or regularly,” Nye added in reference to the famous Area 51, which, despite its fame, remains a highly classified United States Air Force facility. “I wouldn’t be surprised if [Navy pilots] observed some secret test, that nobody wants to talk about, and the story’s being exaggerated now.”

Affording this conclusion to the objects appearing in Navy videos obtained since 2004 may indeed seem reasonable. The same, however, cannot be said as easily about aerial objects of unknown provenance observed more than half a century ago, the likes of which Hillenkoetter had acknowledged “neither Russia nor this country had.” Such an assumption (allowing for the possibility that such objects exist) would require one to accept that advances rivaling modern state-of-the-art aerospace technologies had been underway as early as the Second World War or shortly thereafter. It would also require one to acknowledge that if the former were the case, such advances have somehow also been kept secret for the better part of the last century.

The unlikelihood of this scenario has not been lost on skeptics over the years. In search of more parsimonious alternative explanations for the UFO problem, such unsound arguments tend to favor Occam’s razor, and lead to the presumption that misidentifications of prosaic objects, delusions, and hoaxes can suffice to explain the entirety of the mystery. However, this conclusion also aids us little in finding a truly comprehensive solution to the UFO issue as it has been recognized since the 1940s.

Even if the notion that prospective new military technologies might account for what appears in more recent historical Navy videos depicting unusual aerial objects, the military’s own statements about them seem to be in direct conflict with the idea.

The Pentagon’s officially authorized release of Navy videos depicting aerial phenomena on April 27, 2020 ranks among the most noteworthy stories of the year, and arguably, in the broader history of UFOs. The Department of Defense “authorized the release of three unclassified Navy videos, one taken in November 2004 and the other two in January 2015, which have been circulating in the public domain after unauthorized releases in 2007 and 2017,” according to an official Pentagon statement.

“After a thorough review, the department has determined that the authorized release of these unclassified videos does not reveal any sensitive capabilities or systems,” the statement also read, “and does not impinge on any subsequent investigations of military air space incursions by unidentified aerial phenomena.”

“The aerial phenomena observed in the videos remain characterized as ‘unidentified’,” the statement concluded, adding a link to the Naval Air Systems Command FOIA Reading Room where the files could be downloaded and viewed.

If the objects in these videos were anything known to our military—either from its own inventory or suspected of belonging to that of an adversary—it seems unlikely that the DoD’s “thorough review” would have cleared them for release. This, in addition to characterizing the aerial phenomena in question as “unidentified,” which explicitly conveys that the objects appear to be of unknown origin.

Additional support for the idea that the UAP issue represents an unsolved problem for the military came on August 4, when the establishment of an Unidentified Aerial Phenomena Task Force (UAPTF) was approved by Deputy Secretary of Defense David L. Norquist.

“The Department of Defense established the UAPTF to improve its understanding of, and gain insight into, the nature and origins of [unidentified aerial phenomena],” a Pentagon statement read, describing the newly-formed task force’s mission as being “to detect, analyze and catalog UAPs that could potentially pose a threat to U.S. national security.” The UAPTF is currently operated out of the Department of the Navy.

Prior to the public announcement of the Navy’s task force, an earlier Pentagon program that examined aerial threats, the Advanced Aerospace Threat Identification Program (AATIP), had been operated without widespread public knowledge prior to late 2017, when news of the program was reported by the New York Times and other outlets. The existence of AATIP and its successor, the UAP Task Force, both underscore the significance of the UAP question as a national security concern for the U.S. military. As history shows, this has been the case now for quite some time, whether or not it has always been publicly acknowledged.

“Behind the scenes, high-ranking Air Force officers are soberly concerned about UFOs,” Hillenkoetter had written in February 1960, as reported by the New York Times. The former CIA director, who at the time had been a member of the Board of Governors of the National Investigations Committee on Aerial Phenomena (NICAP), was responding to a directive released by the U.S. Air Force at that time, which advised personnel to treat sightings of unidentified flying objects as potential threats “directly related to the nation’s defense,” the Times reported.

With the renewed attention the Pentagon has shown for the study and assessment of unidentified aerial phenomena over the last few years—and 2020 in particular—it would seem that it remains a potential concern to our military, as past instances of government involvement have shown. This remains evident, despite challenges to its legitimacy as a subject of scientific inquiry that have arisen over the decades.

If studying the history of the subject helps us come to any further understanding beyond all this, it would be that not much has changed since it first emerged on the cultural landscape in the late 1940s. With the subject of UFOs history tends to repeat itself, and much like Hillenkoetter expressed sixty years ago, it remains true today that convincing explanations for the more compelling cases involving unidentified flying objects reported by our military are elusive. Even supposing that they could represent secretive military technologies falls into conflict with the accepted history of aerospace innovation, particularly with consideration for how far back in history reports of military encounters with such aerial objects have been documented.

On the other hand, to leap to conclusions about extraterrestrial life and visitations to Earth may be equally unwarranted; while certainly worthy of consideration, such ideas presently do not have enough supporting evidence.

In short, to say that no simple and truly comprehensive explanation exists that can account for the more convincing encounters from over the years is indeed an understatement. Until there is further data, and enough of it that can support a consensus conclusion on the subject, unidentified aerial phenomena—whatever sources might exist behind its appearances—will remain both a challenge to science, as well as a national security interest.

In spite of its enduring ambiguity, 2020 has made it clear that the United States military, certain members of Congress, and others in government are taking UFOs seriously, to whatever limited extent the subject is being studied. As history shows, we have stood at these crossroads several times before. Perhaps with fresh eyes on the problem, and new technologies that past analysts weren’t able to benefit from using, 2020 could mark a turning point in our understanding of these mysteries of the skies.

If so, moving forward we may succeed in advancing our knowledge of an apparent phenomenon that remains unaccounted for, and one that has managed to elude us now for more than half a century.