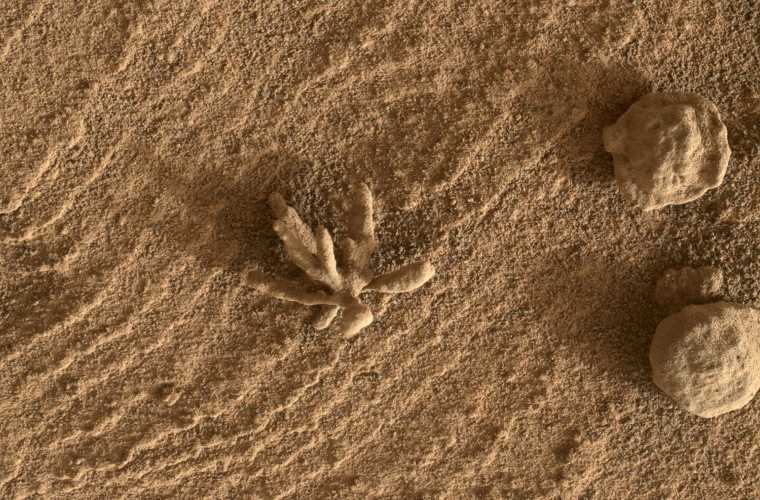 Did Curiosity Rover Spot a Flower on Mars?

NASA’s Curiosity rover has taken a picture of a rock formation on Mars that looks eerily like a tiny flower. Smaller than a penny, the figure in question likely took shape millions of years ago during the red planet’s watery past.

MARS FLOWER THE LATEST IN A LONG LINE OF PICS

Finding images of natural formations on Mars that look like unnatural ones has become a bit of an internet hobby. Most famously, pictures of the red planet’s Cydonia region taken by the Viking 1 Lander mission in 1976 appeared to show a massive face and pyramids. Decades later, higher definition photos of the area showed that those original images were mirages, with the giant face and pyramids determined to be natural formations.

More recently, NASA’s Perseverance rover snapped a picture of an undeniably actual artificial object, only to find out that it was a drill bit the rover itself had left behind. Now, Curiosity has photographed a rock formation with a striking familiarity to a flower and an origin story that helps shed light on the planet’s watery past.

According to a statement from the space agency, “the flower-like rock artifact was imaged by NASA’s Curiosity Mars rover using its Mars Hand Lens Imager (MAHLI) camera on the end of its robotic arm.” The release also states that the image was snapped on the 24th of February this year, representing the 3,396 Martian day of the Curiosity mission.

“The “flower,” along with the spherical rock artifacts seen to the right, was made in the ancient past when minerals carried by water cemented the rock,” the same release explains. The statement also notes that this isn’t the first time Curiosity has stumbled upon similar features in the Martian soil.

“Curiosity has in the past discovered a diverse assortment of similar small features that formed when mineralizing fluids traveled through conduits in the rock.”

In recent weeks, The Debrief reported on potential signs of life found by Curiosity, yet another notch in the long-running rover’s belt. However, for all of the rover’s impressive discoveries, none is as visually stunning as the flower.

MORE CONFIRMATION OF MARS WATERY PAST

While the image of a rock “flower” may not exactly be the “sign of life” researchers are hoping to find on the fourth rock from the sun, its existence does add to the volume of data confirming Mars’ watery past.

“Images of such features are helping scientists understand more about the prolonged history of liquid water in Gale Crater,” the release states.