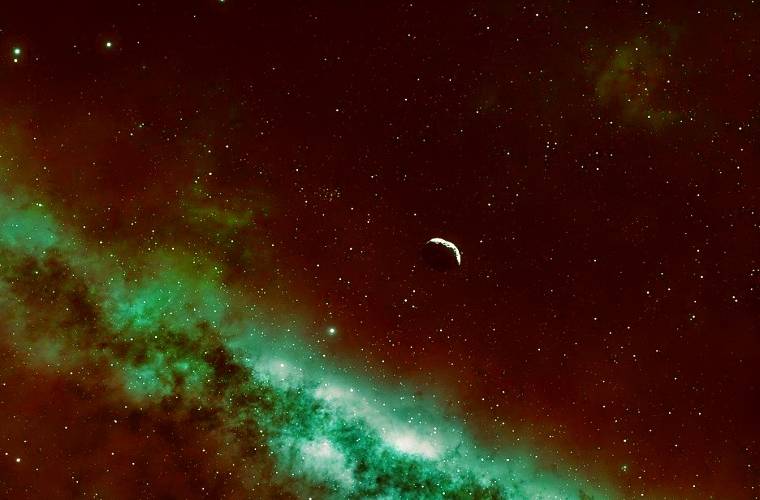 Scientists Found “Complex Organic Matter” in Our Solar System, And It Shouldn’t Be There

In a recently published survey of the asteroid belt between Mars and Jupiter, a group of scientists from around the globe found something hanging around the inner Solar System that they say simply should not be there; a pair of dark red rocks seemingly covered in complex organic material.

“Two asteroids (203 Pompeja and 269 Justitia) have been discovered with a redder spectrum than any other object in the asteroid belt between Mars and Jupiter,” a Japanese Aerospace Exploration Association (JAXA) release states. And according to that same release, “spectroscopic observations suggest the presence of complex organic matter on the surface of these asteroids.”

Background: Is There Life On Other Planets?

Among the most fascinating concepts behind the origin of life on Earth is panspermia, or the notion that life here evolved somewhere else before arriving on our planet via comets, asteroids, or other interplanetary bodies (or beings?).

Recently, the idea has gained some traction, including the concept that life originated within our solar system and was later seeded here on Earth. By all accounts, this latest discovery by the JAXA-led team hints toward at least one possible mechanism behind this concept, and one that may have occurred way back when the solar system was first forming.

That’s because certain types of asteroids (and even larger space rocks known as ‘planetesimals’) originally formed beyond our farthest planet Neptune, at the extreme outer edges of our solar system.

Furthermore, according to the study’s authors, due to the mechanics of their super cold environment, these far-out objects often form complex organic compounds on their surface, something these transient interlopers found by the international team also appear to have, giving them their dark red color.

Until now, this particular class of organically covered space rock was thought to have stayed beyond Neptune, never having the opportunity to work its way down to Earth and seed it with those organic compounds. However, these latest results seem to challenge that notion.

Analysis: The Seeds of Life

Led by Hasegawa Sunao, an Associate Senior Researcher at JAXA’s Institute of Space and Astronautical Science (ISAS), and supported by an international team of researchers from the Massachusetts Institute of Technology, the University of Hawai’i, Seoul National University, Kyoto University, and the Laboratoire d’Astrophysique de Marseille, the group first zeroed in on 203 Pompeja just to make sure they were reading the unusual spectroscopic data correctly. And what they found, they say, was utterly unexpected.

“In the spectroscopic survey, we discovered that 203 Pompeja, with a diameter of 110 km, has a spectrum redder than even that of the D-type asteroids,” the release states, noting that the unexpected rock was redder than the reddest asteroids normally found in this region.

That discovery, they say, led them to look at previously recorded data to see if 203 Pompeia was alone, or if other renegade space objects covered with critical ingredients for life had somehow moved from the outer solar system to the inner asteroid belt.

Such a finding, the release states, would run counter to traditional Solar System formation models and align with “more recent models suggest[ing] that the movement of planets such as Jupiter in the early Solar System caused the gravitational field to shift and mixing to occur.”

With their unexpected readings in hand, the team took another look at that previously recorded data. Surprisingly, they found another match.

“Examination of past observations revealed that 269 Justitia, with a diameter of 55 km and whose very red spectrum had been previously recorded, has a redness similar to that of 203 Pompeja,” the release states. “This is consistent with…the latest Solar System formation model, and is supporting evidence for this model of Solar System formation.”

Still, this team notes, the finding was completely unexpected, and almost surely means that these rogue space rocks were formed outside Neptune’s orbit, then somehow made their way much closer to the Sun, and Earth.

“In order to have these organics, you need to initially have a lot of ice at the surface,” one of the paper’s authors, Michaël Marsset, recently told The New York Times. “So they must have formed in a very cold environment. Then the solar irradiation of the ice creates those complex organics.”

Outlook: Is the Solar System Brimming With Life?

Neither biologists nor astronomers are one hundred percent sure how or where life on Earth started, but nearly all agree that complex organic matter is among its most fundamental ingredients. According to the team behind this latest discovery, findings like this could hold at least one critical piece of the answer, and without the cost of a spacecraft flying all the way out there to take a look.

Seeing Other Worlds with the Giant Magellan Telescope


Ep. 1: Debriefed with Cristina Gomez - This week Cristina tackles the future of Space Exploration via Space & Earth based telescopes

Of course, the study authors don’t exactly rule out sending said spacecraft on the nearly 3 billion mile trip to aid in the hunt for the origin of life, even going so far as to say, “this is worth considering as candidate destination mission targets in the future.”

Book your tickets now, folks, and don’t wear anything red and organic, or you’ll clash (Looking at you, Gaga).