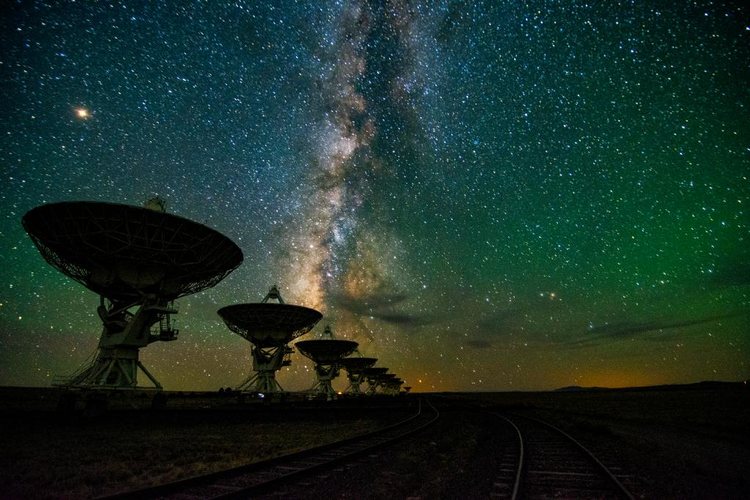 Our Cosmic Neighbors: Is There Alien Technology in Our Solar System?

On the heels of reports from new NASA head Bill Nelson that the space agency will be aiding to identify unidentified aerial objects venturing into U.S. military airspace, Harvard Astronomy Professor Avi Loeb has announced his Galileo Project, with the express goal of hoping to identify alien artifacts either currently loitering in or passing through our solar system. It is an exciting and bold new effort by all accounts, particularly for such an esteemed institution (and one The Debrief will be covering in much more detail); however, it is hardly the first effort of this nature to be undertaken.

“This idea is quite old,” Penn State Astronomer Jason Wright told The Debrief. “It goes back to Ron Bracewell’s ideas in 1960, published just a year after the first radio SETI programs were proposed.”

Wright highlighted the challenge faced by mainstream scientists hoping to venture into this controversial field. “This strain of SETI has not gotten as much attention or funding as other forms like radio SETI, and has acquired quite a giggle factor because of associations with the “Face on Mars” nonsense and Ancient Aliens bunkum.”

Ancient Aliens bunkum notwithstanding, since that 1960 paper by Bracewell, a number of projects both past and present have suggested methods of searching for extraterrestrial artifacts, including on places like the Moon, Mars, and even in Earth’s orbit. Here, The Debrief takes a look at some of those efforts, and how they fit in the overall hunt for extraterrestrial intelligence.

NASA and the Search for Alien Technology

Last December, The Debrief published a story about some mainstream scientists, including those from NASA, who are currently searching for evidence of alien technology, more commonly known as technosignatures.

“Technosignatures refer to any evidence of technology that could be remotely detectable, specifically through the tools of astronomy,” explained Dr. Jacob Haqq-Misra, an astrobiologist and senior research investigator at Blue Marble Space Institute of Science, in an email interview with The Debrief for that story. “Radio signals are one example of a technosignature but not the only one. Other examples are city lights, surface modifications (cities and large-scale deployment of solar panels), changes in the atmosphere (greenhouse gases like CO2 as well as industrial byproducts like CFCs and NO2), free-floating spacecraft, megastructures (i.e, Dyson spheres/swarms), and other possibilities.”

In that same story, The Debrief also highlighted a 2018 workshop by NASA regarding the search for technosignatures and the paper that workshop produced. In short, both the workshop and the paper concluded that the study of possible alien technology was an important component of future NASA missions.

“I do think the subject is becoming more popular and gaining acceptance,” explained Dr. Dawn Gelino, Deputy Director of NASA’s Exoplanet Science Institute and one of the organizers of the TechnoClimes conference, in an email to The Debrief. “I think the scientists looking for technosignatures are organizing and working together a bit better, and being more rigorous in their searches and in publications.”

Since that workshop, NASA has announced a number of missions that could assist this type of research.

“We have James Webb Space Telescope (JWST) to be launched this year that could look at the atmospheres of exoplanets,” Dr. Ravi Kopparapu, a researcher from NASA’s Goddard Space Flight Center, told The Debrief. “We also have next generation space telescope mission concept studies like LUVOIR, HabEX, and OST that look at the atmospheres of exoplanets to find signs of life.”

These same tools, Dr. Kopparapu notes, could also be used for identifying technosignatures.

“So the question of what are the most promising methods boils down to what are we going to have access to in the near-term,” Dr. Kopparapu told The Debrief. “And because the above-mentioned telescopes are the ones we will have access to, it makes sense to use those to look for technosignatures.”

Bringing the Hunt to Our Solar System

In March, The Debrief covered the efforts by Dr. Kopparapu and Dr. Haqq-Misra, who propose that such technosignatures may be found right in our own astronomical backyard.

“I would even say to look at the near-Earth orbit for any anomalous signature that appears at odds with our expectation or doesn’t fit the known data,” Kopparapu told The Debrief in an email for that story. “Just like we are sending probes (like Voyager and pioneer spacecrafts) beyond our solar system, it is quite possible that other technological civilizations will do the same.”

“We are not unique in that sense,” he added.

As far back as 2012, Haqq-Misra and Kopparapu had co-authored a paper about this very idea, in which they concluded that “the vastness of space, combined with our limited searches to date,” implies that any remote unpiloted exploratory probes of extraterrestrial origin would suggest that alien artifacts, or what they term “lurkers” may be hidden in more mundane space objects like asteroids, or even disguised to appear like ordinary space rocks. To find such objects, they proposed methods such as blasting suspect objects with radio signals to measure the reflected data, monitoring them for any unexplained changes in velocity, or simply listening to see if they are emitting any transmissions all on their own.

“Maybe albedo differences (reflected light from the surfaces of objects on asteroids and see if they are consistent with the light reflected from the asteroid itself) is another method,” Kopparapu told The Debrief, offering yet another potential approach for locating such hidden alien objects.

In his email to The Debrief, Penn State’s Wright offered support for the duo’s approach, with one caveat. “It’s certainly possible [such local alien artifacts exist]: our census of probe-sized objects in the Solar System is very very incomplete because space is so big. Upcoming projects like VRO will be very good at finding many more such objects, but even when they are seen, it’s not clear that we’d recognize them as artificial and not, say, asteroids.”

In 2013, physicist Paul Davies, who authored the book “The Eerie Silence: Are We Alone in the Universe?” published a paper titled, “Searching for Alien Artifacts on the Moon.” In that paper, Davies suggested that scientists comb through the database of searchable images captured during the many decades of space studies, particularly those captured by the Lunar Reconnaissance Orbiter, in hopes of spotting something on the moon’s surface or other local environments that doesn’t appear natural in origin.

“The Moon is almost inert, and so objects and features on the surface are preserved for an immense duration,” Davies told The Debrief for that story. “Eventually, the material thrown up by meteor impacts erases records, but a large object on the Moon might remain detectable for tens of millions of years.”

Haqq-Misra made a similar observation, pointing out that the Mars Reconnaissance Orbiter has a similar set of high-resolution images ripe to be studied in this manner. “There are thousands of such images,” he told The Debrief, “and so it is possible that an anomalous artifact could be captured in such images without anybody noticing yet.”

That Debrief story also highlighted a similar idea outlined in a 2020 paper, which proposed using unsupervised distributed machine learning systems to look for such surface anomalies. “This approach could conceivably detect artifacts on the surface of the Moon that would not have been easily noticed by naked eye analysis,” explains Dr. Haqq-Misra.

As it turns out, one effort of this particular type was already undertaken in 2016 by The Lunascan Project and Society for Planetary SETI Research, using those exact Lunar Reconnaissance Orbiter images. And according to the study’s results, two unusual features were spotted within the crater Paracelsus C (which sits on the far side of the moon) that they believe may be “an entrance or passageway that may lead underground.”

To make this determination, researchers created 3D renderings of the suggested alien features and found that one of the two suspect structures is not only statistically different from the surrounding lunar landscape but was “unlike any feature shown on the moon to date.” Unfortunately for the Lunascan team, their research and its compelling results ran into the same barrier much of this type of research ultimately encounters.

“A decidedly conservative mainstream scientific establishment often rejects anomalies based on subject matter alone, i.e., there cannot be alien artifacts on the Moon because there are no alien artifacts on the Moon (or other planets),” the researchers note in the paper. “Such a view is an example of circular reasoning, based on the belief that extraterrestrials do not exist, or if they do exist, that they could not have traveled to our solar system.”

This issue was confirmed in an email to The Debrief by the lead author of the study, Dr. Mark J. Carlotto, an electrical engineer and senior scientist at General Dynamics, who said, “Our analysis has been ignored by the planetary science community.”

Another suggested method for searching for extraterrestrial technology in our local environment includes looking for evidence of past, massive-scale alien mining operations.

It’s an idea proposed by physicists Dr. Duncan Forgan from the University of Edinburg and Dr. Martin Elvis from Harvard University in their 2011 paper, which was published in the Journal of Earth and Planetary Astrophysics.

“Considering the detected disc of debris around Vega as a template,” the study states, “we explore the observational signatures of targeted asteroid mining (TAM), such as unexplained deficits in chemical species, changes in the size distribution of debris, and other thermal signatures which may be detectable in the spectral energy distribution (SED) of a debris disc.”

Like other proposed efforts, their paper recommends using telescopes and light spectra data to look for the artifacts of such mining efforts, which may still exist in places like the Solar System’s Kuiper Belt, or maybe even in the rings of Saturn.

The Future of the Technosignature Hunt

With these and other proposed methods on the horizon, scientists agree that even a project as ambitious as Galileo shouldn’t mean that traditional efforts in this arena be abandoned.

“Radio searches (like SETI) can—and should—continue,” Dr. Kopparapu told The Debrief. “If we do detect a radio signal that is confirmed to be not-natural, and not-from Earth, then things get interesting.”

Fortunately, even though the stigma of UFOs and Ancient Aliens may still cast a shadow over mainstream efforts to search for technosignatures, those already involved in this steadily growing field like to emphasize the historically critical role of first scientists in looking for answers to the unknown.

“In the same way that scientists searched for exoplanets before there was sufficient proof of them, I think scientists searching for technosignatures are brave,” Dr. Gelino told The Debrief. “They are sometimes staking their established scientific careers and reputations on looking for something they believe is there.”

All of the proposed efforts seem at least worthwhile to consider, and simple curiosity is undoubtedly crucial to scientific exploration. However, as Dr. Gelino also notes, it is often scientists’ personal hopes and aspirations that fuel their hunt for the truth.

“I would love to one day have proof to validate my belief that Earth is not the only planet in the Universe that holds intelligent life,” she told The Debrief. “My dream is to have an unambiguous answer to humanity’s age-old question: ‘Are we alone?’”

The Debrief’s Editor-in-Chief, MJ Banias, aided in the reporting of this article.