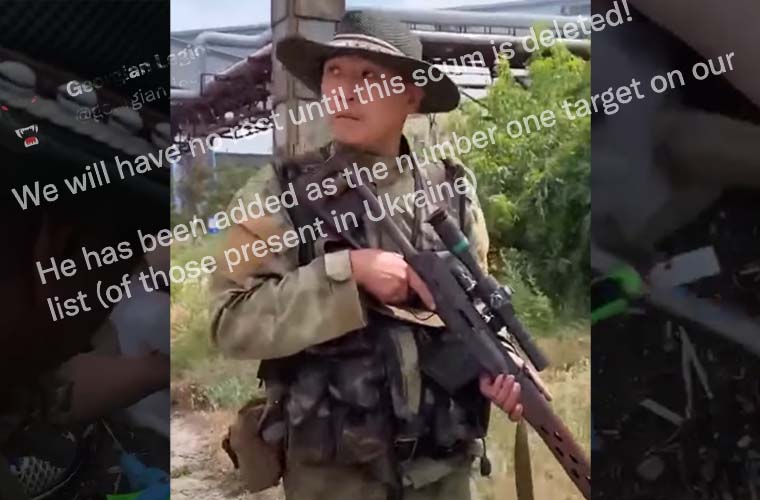 A search is said to be underway for the Russian soldier seen torturing and castrating a Ukrainian prisoner of war in a sickening video that recently appeared online.

The video, which first appeared on several pro-Russian Telegram channels Thursday evening, shows a Russian soldier approaching a man who is lying down bound and gagged and wearing the uniform and patches of the Ukrainian Armed Forces.

The Russian soldier hurls insults at the captive and kicks him in the head before using what appears to be a box-cutter to cut the prisoner’s pants and then cutting off his genitals. At least two other Russian soldiers stand nearby as the horrific incident goes down.

Another video uploaded to a pro-Russian Telegram channel on Friday appears to show the same mutilated prisoner being executed by a single gunshot to the head. Using ropes tied around the victim’s ankles, the Russian soldiers then drag and dump the body into a nearby hole.

The Debrief was unable to verify the footage. However, several Ukrainian media outlets and the investigative site Bellingcat confirmed that the videos appeared authentic and undoctored.

Understandably, the disturbing clips have sparked widespread outrage, with many pointing out the exceptionally sadistic scene as further evidence of Russia’s unfettered willingness to engage in atrocious war crimes during its ongoing invasion of Ukraine.

Ukrainian presidential adviser Mykhaylo Podolyak, who also confirmed the video’s authenticity, vowed “everyone” involved in the gruesome war crime would be brought to justice.

“Russia is a country of cannibals who enjoy torture and murder,” Podolyak wrote on Twitter. “But the fog of war will not help to avoid the punishment of the executioners. We identify everyone. We will get everyone.”

The clips show Russian soldiers patrolling the recently captured Azot chemical factory in Severodonetsk, including one soldier carrying a Dragunov sniper rifle and wearing the same distinctive black Stetson hat and bracelet as the torturer in the video. The soldier from the news segments matches the exact description of the individual seen the Ukrainian POW torture video, however, The Debrief cannot independently verify they are the same person.

“Bracelet on the left hand seems to be the strongest single detail, making this a pretty open and shut match,” said Aric Toler, the director of research and training at the investigative journalism site Bellingcat.

According to Russian-state media, the soldiers seen in the news segments are part of the Chechen Akhmat battalion of the 141st Special Motorized Regiment, also known as the Kadyrovites.

The Kadyrovites, who technically fall under the umbrella of the National Guard of Russia, but have been criticized as the private army of Chechen warlord Ramzan Kadyrov, have a long history of being accused of human rights violations at home and war crimes, both in the Syrian Civil war and the 2022 invasion of Ukraine.

In April, The Debrief reported on an incident where Russian troops from the far east republic of Buryatia, and fighters of the Chechen Republic, got into a large shootout with each other. While both groups are supposed to be fighting for the same side, the firefight was supposedly sparked when some Buryat soldiers from Russia’s Eastern Military District refused to continue fighting in Ukraine.

On Friday, the New York Post and multiple online open-source intelligence sites claimed the Russian soldier responsible for the gruesome war crime had been identified as a 39-year-old from the North Caucasus region of Kalmykia named Vitaly.

Posts depicting the soldier’s alleged date-of-birth, telephone numbers, email addresses, and passport number have been widely shared online. The Debrief cannot confirm that the information belongs to the war criminal seen in the video and has decided not to publish it.

Ukrainian officials vowed to see local and international courts hold Moscow responsible for this latest incident in a string of alleged war crimes going back to the start of Russia’s full-scale invasion in late February.

On July 29, Ukraine’s ombudsman Dmytro Lubinets said he had requested the Prosecutor-General’s Office to launch a probe into the sickening videos and called on further support from the international community.

“Also, we are preparing a communique for the UN Committee Against Torture to organize an urgent visit to the Russian Federation and the temporarily occupied territories of Ukraine, as well as to the European Committee for the Prevention of Torture, Inhuman, or Degrading Treatment or Punishment (CPT),” said Lubinets.

“This horrific assault is yet another apparent example of complete disregard for human life and dignity in Ukraine committed by Russian forces,” said Marie Struthers, Amnesty International’s Director for Eastern Europe and Central Asia.

“All those suspected of criminal responsibility must be investigated and, if there is sufficient admissible evidence, prosecuted in fair trials before ordinary civilian courts and without recourse to death penalty.”

Some Ukrainian fighters, however, say they’d prefer battlefield justice for the Russian soldier in the shocking video, as opposed to having a day in criminal court.

On its Twitter page, the Georgian Legion posted several images of the Stetson-wearing Russian soldier, saying, “We will have no rest until this scum is deleted! He has been added as the number one target on our list (of those present in Ukraine.).”

In a subsequent tweet, the ethnic Georgian soldiers fighting for Ukraine said, “Our sniper squads know every detail now. There will be no place to hide for every single war criminal.”

Speaking with The Debrief, an individual close to Ukrainian Armed Forces described the Russian soldier from the video as “the most wanted man in Ukraine right now,” and without elaborating, said efforts to “hunt down” the perpetrator was currently underway.

New Solar Panel Could Be a Game Changer at Home, and on Future Space Missions

The individual, who did not wish to be named for security reasons, however, pointed out that right now, it isn’t clear when or where the grisly video was filmed. “Hopefully, he is already dead.”

Another individual engrossed in the conflict in the eastern Donbas region said they weren’t surprised by the sadism seen in the clips, telling The Debrief that crime and brutality were ingrained in the ethos of the Russian military.

“Simple practice in the units of the Russian Federation is soldiers are ‘bound with blood’ to commit a crime,” said the individual who did not wish to be named for security reasons. “Murder, rape, theft are the restoration of order. A person who committed the murder of civilians will not give evidence against his colleagues and commanders, and he will also try not to surrender, since he has almost no chance of survival.”

A day after the torture and execution videos appeared online, dozens of Ukrainian prisoners of war were killed in a missile strike on a prison in Olenivka, a part of Donetsk currently occupied by Russia.

Spokespersons for the Russian Ministry of Defense and self-proclaimed Donetsk People’s Republic claimed 40 to 53 Ukrainian POWs were killed and 75 wounded in what they said was a Ukrainian strike on the prison by U.S.-made HIMARS rockets.

Ukraine’s armed forces, however, denied carrying out the attack, saying it was a Russian artillery strike meant to hide the mistreatment of prisoners. In his daily address on July 29, Ukrainian President Volodymyr Zelensky said, “This was a deliberate Russian war crime, a deliberate mass murder of Ukrainian prisoners of war.”

Neither claim could be independently verified.

So far, the Kremlin has not commented on the videos apparently showing Russian soldiers involved in the torture and murder of a Ukrainian POW.

However, the Russian Embassy to the United Kingdom not only condoned but encouraged the execution and “humiliating death” of Ukrainian POWs in a disturbing Twitter post on Friday evening. The post included a YouTube link to an interview with a purported married couple from Mariupol who said they were shelled by Ukrainian forces from Azovstal.

“#Azov militants deserve execution, but death not by firing squad but hanging, because they’re not real soldiers. They deserve a humiliating death,” the embassy wrote on its official Twitter account.