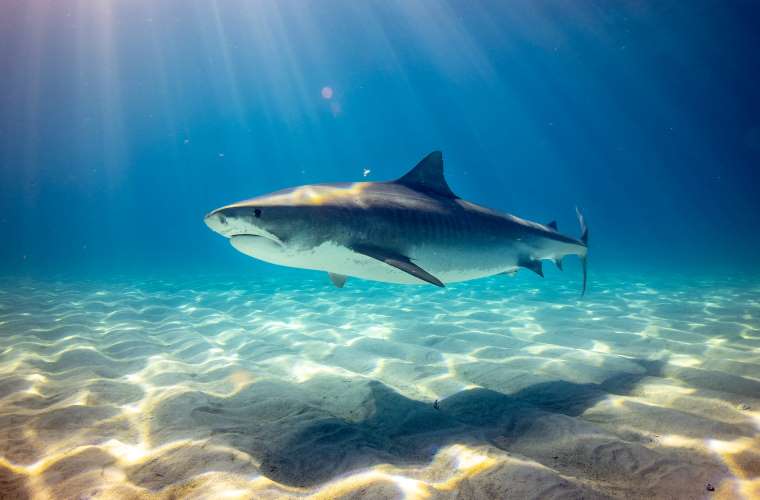 Sharks Use Earth’s Magnetic Field Like a “GPS” to Navigate, New Study Proves

Now a team of researchers have found a novel way to test this hypothesis, with their results published in Current Biology confirming what has been suspected for decades.

“It had been unresolved how sharks managed to successfully navigate during migration to targeted locations,” said Bryan Keller from the National Oceanographic and Atmospheric Association, the Save Our Seas Foundation project leader, and a Florida State University Coastal and Marine Laboratory researcher in a press release announcing the results. “This research supports the theory that they use the earth’s magnetic field to help them find their way; it’s nature’s GPS.”

In an email to The Debrief, Dr. Keller said his team started planning their tests by analyzing previous research in this field, specifically those focusing on other sea animals already known to use magnetic fields for navigation.

“We primarily based our work off of analysis conducted by Nathan Putman [who is a co-author on this paper] and his colleagues on salmon, eels, and sea turtles.”

Keller also pointed to a more recent 2017 study on sharks using magnetic fields, where researchers found, “these impairment experiments support hypotheses that magnetic field perception in sharks is not solely performed via the electrosensory system, and that putative magnetoreceptor structures may be located in the naso-olfactory capsules of sharks.”

Analysis: All This Machine Does Is Swim, And Eat, And Make Little Sharks. Oh, and it Uses Magnetic Fields to Navigate.

To put the longstanding theory to the test, Keller and his team selected a smaller shark for ease of testing, as well as a species known for its annual migration pattern: the bonnethead [Sphyrna tiburo] shark.

“The bonnethead returns to the same estuaries each year,” Keller said in the release. “This demonstrates that the sharks know where ‘home’ is and can navigate back to it from a distant location.”

The team then selected 20 juvenile, wild-caught bonnetheads. In a controlled lab setting, they exposed the sharks to magnetic field conditions similar to those hundreds of kilometers away from where they were originally caught.

If the sharks were deriving their positional information from magnetic fields, as the research team suspected, the animals would react to a northward orientation in the southern magnetic field and the opposite for the northern field. Sure enough, when the experiment was turned on, the bonnetheads indeed tried to compensate for the artificial fields being produced, particularly those fields that were within their natural, environmental range.

For Keller and his team, these results were not unexpected, but the test’s success was.

“I am not surprised that sharks use the magnetic field to navigate,” Keller told The Debrief, “but I was pleasantly surprised that our experiment actually worked out! This question has been withstanding in the community for so long because it was tough to answer. We weren’t sure our methods were going to work, but we were sure they were the best available option – so it was worth a shot!”

The release points out that these significant findings in this one particular breed of shark may also help explain some previously hard to understand feats by other shark species, most notably, “one great white shark was documented to migrate between South Africa and Australia, returning to the same exact location the following year.”

“How cool is it that a shark can swim 20,000 kilometers round trip in a three-dimensional ocean and get back to the same site?” Keller said in the release. “It really is mind blowing. In a world where people use GPS to navigate almost everywhere, this ability is truly remarkable.”

When asked if manmade things like underwater power cables interfere with this navigation, Keller told The Debrief that this was indeed an area of concern.

“These submarine cables can produce magnetic anomalies. If animals navigate using the magnetic field, then these anomalies could be problematic for migratory species.”

Keller also noted that although there has been some research in this area, more work still needs to be done for scientists to reach a consensus.

Outlook: Just When You Thought it Was Safe to Go Back In The Water…

While the team’s results have helped solve a longstanding mystery, Dr. Keller is quick to point out that it was far from an individual effort.

“This question has been asked for about 50 years, and our research is surely exciting, but we would not have been able to carry out our work without the groundwork laid by other researchers throughout the last five decades. ([It] was truly a collaborative effort, inclusive of those who are not co-authors. Specifically, James Anderson, Kyle Newton, and Pete Klimley.”

As for what he and his colleagues hope to study next, Dr. Keller told The Debrief he sees at least three tantalizing areas that merit further analysis.

“The first thing I would like to explore is the effect of EMFs [Electromagnetic Fields] on the spatial ecology of sharks. We would also like to study how sharks may use Earth’s magnetic field for fine-scale navigation. [Also] research from Jayne Gardiner and Andy Nosal has shown sharks use olfactory cues for navigating when in close proximity to target locations, but we would like to explore how these animals may use the magnetic field for fine-scale navigation.”

When asked if their research may indicate a quantum process like the one some birds use when tapping into the Earth’s magnetic field, Keller noted that “it is unresolved how sharks detect magnetic fields.” However, he concluded, now that scientists know it is happening, further experimentation into how it happens can finally be done.