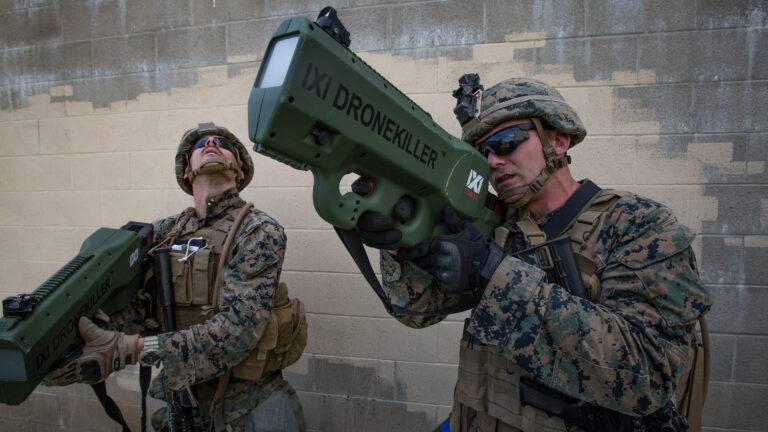 The Pentagon just released its new joint forces counter-drone strategy, detailing their plans for addressing threats posed by small unmanned aircraft systems (sUAS). “This strategy provides the framework for addressing sUAS across the spectrum from hazard to threat in the homeland, host nations, and contingency locations,” said Acting Secretary of Defense Christopher Miller.

The release of the Pentagon’s new counter-drone strategy comes just days after the FAA issued new regulations requiring, by 2022, all mass-produced drones to broadcast a “Remote ID,” identifying not just the location of a drone, but also its operator. Controversially, by 2023, the FAA’s new drone law will also make it illegal to fly any drone within the United States that doesn’t broadcast its location. Current drone owners will either have to retrofit their devices with a new broadcast module or only fly in specially designated “FAA-Recognized Identification Areas.” Currently, no such areas exist, and the FAA says they will be accepting applications for new zones in 2022.

The Pentagon’s new counter-drone strategy isn’t intended to address concerns related to unmanned systems’ general use. Instead, the DoD says the goal will be to “detect, track, identify and if necessary, deter, deny, or defeat” sUAS operating in the vicinity of DoD forces and facilities both at home and abroad. In a statement, Acting Secretary Miller said, “Small unmanned aircraft systems (sUAS) were previously viewed as hobbyist toys, but today it is evident that the potential for hazards or threats has the ability to impact the Joint Force.”

BACKGROUND: The Framework of a Counter Drone Strategy

According to the FAA, there are 1,776,717 registered drones and 200,000 certified remote pilots in the United States alone. This exponential growth in both availability and use of small commercial drones has created new and serious concerns for homeland security and defense officials. These concerns have been noted in several recent examples and demonstrated the rapidly accelerating challenges posed by small unmanned aerial systems.

Documents obtained by the defense news site The Warzone detailed how one of America’s most significant nuclear plants, the Palo Verde Nuclear Generation Station near Tonopah, Arizona, was plagued by swarms of small drone systems throughout several nights in September 2019. “Officer noticed several drones (5 or 6) flying over the site. The drones are circling the 3 unit site inside and outside the Protected Area,” noted one of the official reports obtained by The Warzone.

During December 2019 and January 2020, the FAA, law enforcement, and even elected officials were plagued by reported sightings of drone swarms stretching throughout Colorado, Nebraska, and Kansas. As mysteriously as they started, by mid-January 2020, sightings of the drone swarms suddenly ceased. A year later, the FAA, law enforcement, and the military say they still haven’t been able to identify who was responsible for the tri-state drone flap.

In a more pressing concern for defense officials, in September 2019, small explosive-laden drones attacked one of the world’s most extensive oil processing facilities in Saudi Arabia, sparking massive fires. Results of the attack temporarily cut Saudi Arabia’s ability to supply oil to the world in half.

In their new counter-drone strategy, The Pentagon acknowledged so far, the DoD has not been able to keep up or effectively respond to threats posed by the rapid proliferation of sUAS. With their new plans, the DoD says they cannot merely rely on materiel solutions alone and will be re-examining policies and procedures to counter challenges posed by small unmanned drones.

The Pentagon outlines three primary goals they will be pursuing with their new counter drone strategy.

When it comes to domestic concerns, the DoD says efforts to integrate, manage and track sUAS into the National Airspace System (NAS) have been slow to develop, challenging the ability to defend U.S. forces and facilities in the Homeland. Until the FAA’s new Remote Identification regulations are fully in effect, The Pentagon acknowledged the burden of tactically detecting and identifying anomalous systems near military facilities would continue to be the responsibility of installation commanders.

Within the borders of the United States and foreign Host Nations, The Pentagon says physical dangers posed by intentional sUAS strikes or accidents caused by careless use are only one concern for military officials. According to the DoD, the most frequent use and primary concern of adversarial sUAS at permanent operating bases relate to the collection of intelligence against U.S. forces and facilities.

OUTLOOK: The future of Drone Security

To address the central challenges posed by sUAS, The Pentagon says they will invest heavily in research, development, and test and evaluation of layered counter-drone defenses.

The Department’s goal, they say, will be to “rapidly develop innovative solutions while leveraging a risk-based assessment process.” The Pentagon also says “non-materiel solutions” will be critical, and new joint service doctrine and training standards will be developed to counter small drone threats.

Presently, every branch of the U.S. military has been working on perfecting differing systems and capabilities to counter unmanned drones. The U.S. Air Force is currently field-testing the High-Energy Laser Weapon System (HELWS) to identify and neutralize hostile drones. Currently, the Navy only has one operational counter-drone system, the Laser Weapon System (LaWS), carried aboard the USS Ponce. The Navy also plans to deploy “ODIN,” an optical dazzler that can interfere with unmanned aerial system sensors, and HELIOS, a 60-kilowatt laser, aboard the USS Preble in 2021.

The DoD says one significant goal in their new counter-drone strategy will be to leverage what they consider is their “biggest competitive advantage,” which is being the global “partner of choice.” With this, The Pentagon says they must demonstrate the ability to protect U.S. interests and assist allies by prioritizing interoperability and information sharing.

The task of heading up The Pentagon’s new counter-drone strategy will be the Joint C-sUAS Office (JCO), which was created in 2019. “Through the JCO, the Department will ensure there is a consistency of approach, technology, operational constructs, and developmental intent for joint C-sUAS solutions,” says the DoD.

No timeline has been established when The Pentagon intends to fully achieve all of its objectives outlined in the new counter-drone strategy. However, as part of America’s massive civil service, the DoD’s intent to meet the challenges posed by sUAS has been seemingly undisturbed by the recent political turmoil in the U.S..

The original draft for the new counter-drone strategy was presented to then-Secretary of Defense Mark Esper in October 2020 and outlined to Congressional leadership in November. On November 5, 2020, Esper was fired by President Donald Trump over the Secretary’s refusal to allow active-service troops to be deployed in response to Black Lives Matter protests in the summer. Final approval and release of The Pentagon’s new counter-drone strategy yesterday was signed off on by Acting Secretary of Defense Christopher Miller.