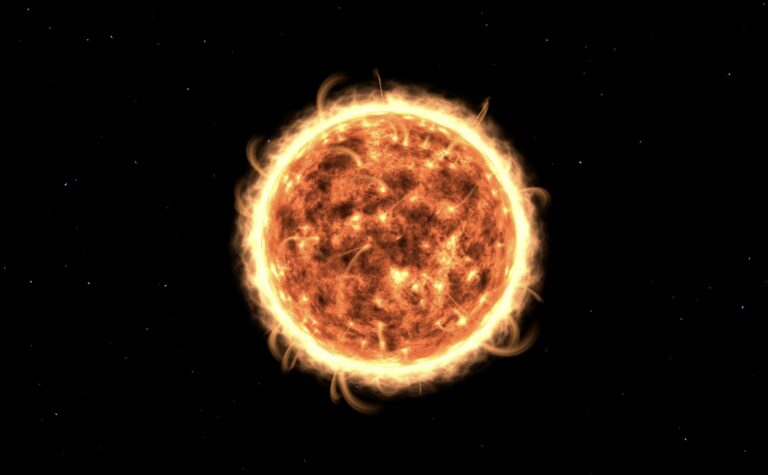 Sunlight and the Extinction of Gamma-Rays

According to quantum mechanics, light can scatter light. Just like any other elementary particles, the particles of light – photons, can collide with each other. And if two photons carry enough energy, their collision could produce an electron and its anti-particle – the positron. Above the energy threshold for producing electron-positron pairs, the interaction is as strong as that between an electron and a photon.

Can we search for these keys under a bright enough lamppost?

Astronauts often confess that the most startling quality of outer space is its extreme darkness. Above the Earth’s atmosphere, there is no haze from scattered city lights.

But in a special direction in the dark sky, there is a brilliant source of light: our Sun. Its hot surface manufactures visible light, which is something to be proud of given that most other stars, like our nearest neighbor Proxima Centauri, are much cooler, requiring the use of infrared goggles in order for us to see them.

The photons emitted by the Sun could produce electron-positron pairs if they collide with other photons that are a trillion times more energetic. Interestingly, the Universe glows in such energetic photons. They are produced in the blast waves of supernova explosions from the collapse of massive stars, or in the relativistic jets generated by spinning black holes. The cumulative emission from all cosmic sources constitutes a background of energetic photons, so-called gamma-rays, each carrying a trillion times more energy than a typical photon emitted from the surface of the Sun.

In a new paper, I calculated the chance of an energetic cosmic photon that grazes the Sun to be absorbed through a collision with a Solar photon. Surprisingly, this probably is as high as seven percent. The extinction-level of cosmic gamma-rays declines by a factor of two hundred at the location of the Earth.

Altogether, it is remarkable that sunlight produces a sizable extinction of cosmic gamma-rays as a result of the production of electron-positron pairs.

Nature is kind to our gamma-ray astronomers. If the Sun was ten times hotter, like massive stars, it would have blocked our view of these gamma-rays from the Universe.  In that case, astronomers might have not existed in the first place, because the massive star would have lasted only millions of years, consuming its nuclear fuel quickly and ending its life in a supernova explosion.

Just as in Hollywood, glamorous stars that overshadow their environment tend to be short-lived.

The mass budget Universe is inferred to be dominated by unknown particles that scatter more weakly than light on light. These dark matter particles fill up galactic space in complete obscurity, giving Rilke’s poem “Night” a cosmic significance:

Night. You with your depth-dissolving face
pressed against my face.
You, counterbalance
to my awestruck gaze.

Night, shuddering in my regard,
but in yourself so steady;
inexhaustible creation, enduring beyond
the fate of earth;

brimming with new stars, who fling
fire from their birth
into the soundless adventure
of galactic spaces:

your sheer existence,
you transcender of all things, makes me so small.
Yet, one with the darkening earth,
I dare to be in you.

Indeed, within billions of years the Sun will die, the Earth will darken, and within trillions of years, even the faint nuclear engine of Proxima Centauri will turn off. Our ultimate cosmic destiny is to become dark matter. For now, let’s enjoy the light show while it lasts.