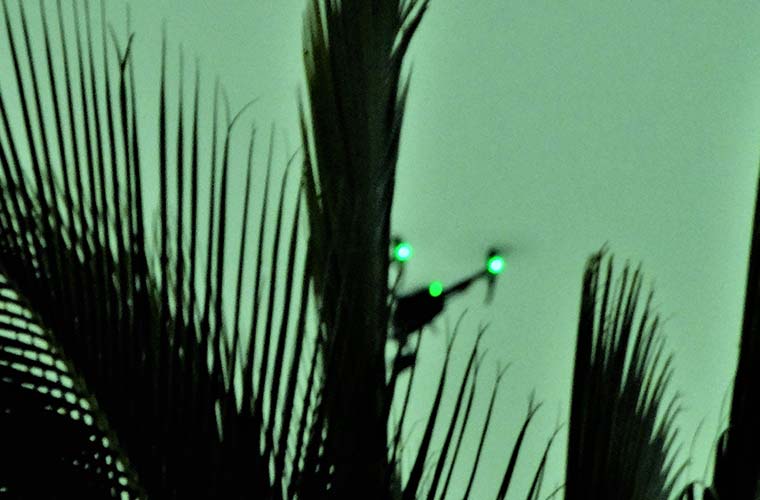 A rash of recent suspicious drone activity has been observed near German military sites, which are currently training Ukrainian soldiers in the use of NATO weapons and equipment.

A German Ministry of Defense spokesman further clarified that the recent suspicious drone activity near the Wildflecken military site occurred on consecutive nights on September 30 and October 1.

In addition to this recent wave, there have been other commercial drone incursions at other German NATO bases in recent months.

Idar-Oberstein military base, located in the western state of Rhineland-Palatinate, is said to have been one of the other sites to experience suspicious drone activity in recent weeks.

Idar-Oberstein is Part of the Baumholder Military Community, consisting of numerous U.S. and NATO military facilities and home to the largest concentration of American combat soldiers outside the United States.

Suspicious drone activity has also been recorded over U.S. Army facilities near Grafenwoehr, part of the U.S. Army Garrison Bavaria, located roughly 20 miles from the border of Czechia.

Aside from being German or NATO military facilities, each of these locations with recent suspicious drone activity are sites involved in training Ukrainian soldiers on NATO weapon systems being provided by allies to help defend against Russia’s ongoing invasion.

In May, the German Ministry of Defense confirmed the 51st Observational Armored Artillery Teaching Battalion at Idar-Oberstein was training approximately 60-90 Ukrainian soldiers to use the Panzerhaubitze 2000, a German-made 155mm self-propelled howitzer. Germany and the Netherlands have promised to provide 22 Panzerhaubitze 2000s to Ukrainian forces.

Since at least as recently as July, the Panzerhaubitze 2000 has been extensively used in Ukraine. Several systems already require repair after being used to fire over 100 shells a day in artillery duels with Russia.

The Pentagon has likewise confirmed that since at least May, Ukrainian troops have been training on Western armor and artillery systems with the 7th U.S. Army Training Command at Grafenwoehr.

Speaking with The Debrief, the German Ministry of Defense confirmed that Ukrainian soldiers are currently training in Germany.

“We can confirm that Ukrainian soldiers are being trained in Germany. They will be trained as a military driver, as a gun operator on the carriage, and as maintenance soldiers for the all-protection transport vehicle Dingo (ATF-Dingo),” said a spokesman for German Joint Support and Enabling Service Headquarters.

Classified as a “mine-resistant ambush protected” (MRAP) vehicle, Germany’s defense department says, “Probably no other Bundeswehr vehicle has saved as many lives as the Dingo.”

In mid-September, Germany announced they would provide 50 ATF Dingo to Ukrainian forces.

When asked, representatives with Bundeswehr declined to confirm that the training of Ukrainian troops on the ATF Dingo was being performed at the Wildflecken military training area, the site of recent suspicious drone activity.

“Please understand that we are not allowed to provide any further information due to the ongoing police investigation and regarding the details and locations of the training, as well as relocations and other individual measures for reasons of operational security,” a spokesman for German Joint Support and Enabling Service Headquarters told The Debrief.

Located nearly 100 miles northeast of Frankfurt and encompassing more than 18,00 acres, Wildflecken was initially established in the mid-1930s as a training facility for the Wehrmacht’s IX Corps.

After WWII, Wildflecken became part of the 7th Army Training Command, hosting numerous U.S. infantry, armor, intelligence, and engineering battalions. Following the end of the Cold War, the base was returned to the German government.

Wildflecken is home to the German Army Tactical Combat Simulation Center and hosts training for the German military and NATO allies.

Dubbed “The Top of the Rock” by American troops, Wildflecken has been described as one of the most feared and disliked NATO training sites in Europe due to its high altitude and extreme weather. Wildflecken is also one of the few military sites the German government allows to use CS gas in training.

While perhaps not a choice destination, the harsh atmosphere of Wildflecken would make it an ideal location for training Ukrainian troops destined for the rigors of war.

German officials declined to speculate on who is likely responsible for the rash of suspicious drone activity over German military sites.

“At no time was the population endangered. [However] please understand that we are not allowed to provide any further information due to the ongoing police investigation and for reasons of operational security,” said a spokesman for the German Ministry of Defense.

Speaking on background with The Debrief, a NATO counterintelligence officer familiar with the incidents stated that Russian intelligence services were most likely responsible for the recent drone events.

“Russia is actively in a war with Ukraine, and you’ve got small commercial drones flying over multiple sites used by allies to train Ukrainian forces. I wouldn’t exactly call this a major case of ‘who done it,” said the counterintelligence officer under a condition of anonymity.

As Europe’s largest democratic economy, Germany has long been on the frontlines of Moscow’s shadow war against the West and a target for Russian espionage.

In late August, it was revealed that two senior officials with Germany’s Ministry of Economic Affairs were by Germany’s domestic intelligence service (Bundesamt für Verfassungsschutz or BfV) of being Kremlin spies.

Earlier this year, an employee at the Materials Research Institute in Augsburg received a suspended sentence and fine after spending nearly 8 months in jail for passing along aerospace secrets to a Russian intelligence agent. Due to German press law, the individual is only identified as Ilunur N., who received a relatively light punishment because prosecutors characterized him as being a “useful idiot” for the Kremlin.

With Germany now serving as a significant center for NATO assistance and training of Ukrainian troops, it only becomes an even more important target for the Kremlin’s intelligence services and Russian spies.

In the past few months, America’s Ramstein Air Force Base, located in southwestern Germany, has been the meeting place for the Ukraine Defense Contact Group, a coalition of 40 countries that the Defense Department created after the Russian invasion to address Ukraine’s needs and requests.

Ramstein also serves as headquarters for U.S. Air Forces in Europe, NATO Allied Air Command, and as part of the Kaiserslautern Military Community, is home to the largest U.S. community overseas.

According to a recent report by the New York Times, the Pentagon is in the process of standing up a new European command dedicated to providing security assistance to Ukraine. Reportedly, the new command could include upwards of 300 personnel and be housed at U.S. Army Garrison Wiesbaden, the headquarters for U.S. Army Europe (USAREUR), located on the Rhine River roughly 25 miles west of Frankfurt.

“With the Russian war of aggression against Ukraine, the threat of Russian espionage, disinformation campaigns, and cyberattacks has taken on another dimension,” German Interior Minister of the center-left Social Democrats (SPD) Nancy Faeser told Der Spiegel in September.

In addition to suspicious drone activity, an August report by Germany’s military counterintelligence service (MAD) noted that several suspicious vehicles had been observed near military bases in Idar-Oberstein and Grafenwoehr, where Ukrainian troops were being trained.

“Particularly due to the training of Ukrainian armed forces here in Germany, but also due to the arms deliveries to Ukraine, interest in Germany as a hub and as a logistical hub has, of course, increased again,” said Rosenberg. “When a drone flies over an ammunition depot or over a training facility, in which Ukrainian forces would be trained, possibilities of espionage and sabotage must be carefully examined.”

A police investigation into the recent rash of suspicious drone activity near Wildflecken is currently underway.

“The police were informed immediately and started the investigation. These investigations are ongoing,” a spokesman for the German Defense Ministry told The Debrief.

Local law enforcement officials confirmed that officers had responded to the recent reports of suspicious drone activity near Wildflecken and an investigation into the incidents is underway.

“Whether the sighted objects were actually drones cannot be confirmed with conclusive certainty at the moment,” said a police spokesperson in Würzburg.

When asked, a spokesperson for the U.S. Air Force’s 86th Airlift Wing declined to answer specifics about any recent reports of drone incursions at Ramstein Air Force Base and headquarters of NATO Allied Air Command.

Officials said that if someone spots a drone operating near Ramstein Air Base, they should immediately contact the 86th Security Forces Squadron Base Defense Operations Center at +49 06731-47-2050, or the German Polizei.