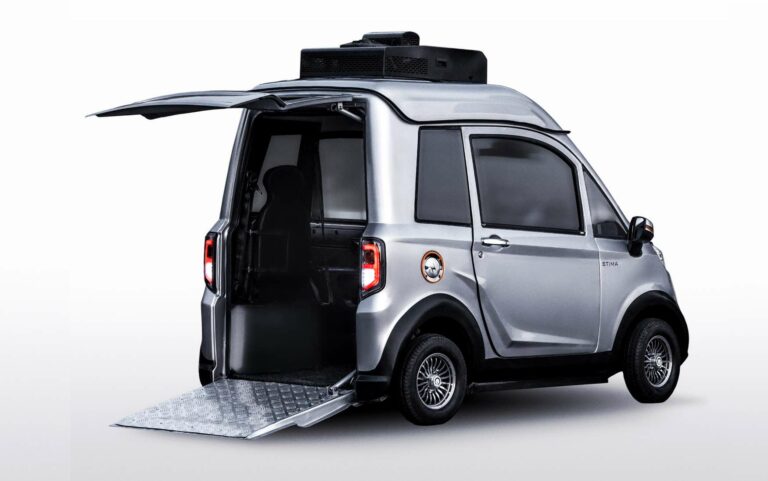 The market for electric cars is growing in Brazil, and new models of vehicles that use clean energy are emerging in the trade. Although it may seem like a recent initiative, the concept of the electric car has existed since the 19th century. However, over the last five years, a Brazilian developer has been working to create an electric car that is not only environmentally friendly but solves one of the biggest problems for drivers with disabilities: accessibility.

The Stima, designed by Luigi Mangini, CEO of Green Innovation, the Brazilian company responsible for the car’s creation, was officially launched last September at the Reatech International Fair of Technologies in Rehabilitation, Inclusion, and Accessibility in São Paulo, Brazil’s biggest economic center.

Mangini’s electric car endeavor is both audacious and efficient, being the first national project to reach the market and the only car with a universal design—that is, it can be used by people with or without disabilities, as all the controls are easily within reach and are accessible by both hand and by foot. By activating the vehicle’s electronic command, the rear compartment opens, allowing the user access to features that include coupling of the seat to the steering wheel and to the control panel.

With a three-passenger capacity, the two seats behind the driver are retractable. It also has an airbag, anti-lock brakes, and safety belts. Although designed for urban use by licensed drivers, it can also be used for more specialized purposes that include restricted areas such as airports and closed communities, as well as by driving instructors and other unique settings.

Mangini has two sisters who use wheelchairs. The main goal is to enable social equity for people with disabilities, giving them autonomy to carry out their daily activities independently while maintaining a commitment to respect the environment by using clean energy.

Considering that Brazil does not have a tradition of electric cars, Mangini guarantees that the user will not have problems being able to recharge his vehicle.

“Our vehicles are not dependent on recharging points, “Mangini says. “They can also be recharged in any residential outlet (110-120 volts). There is no such exclusive dependence.” This factor is fundamental considering that there are only 1,500 public charging stations in a country with an immense territorial span; at an estimated 8,514,876 square km, Brazil is the fifth largest country on the planet.

Mangini points out that electric vehicles will be customized according to the customer’s needs.

“[A]fter a test drive and initial analysis, a survey of needs is done,” Mangini says, adding that “the steering wheel and controls are positioned and installed for better adaptation to the user, since it can be driven both ways, using the feet or the hands.” The inventor guarantees that it will be the cheapest vehicle on the market, around $13,000 USD, with all adaptations already included, but this price can increase depending on the customizations added, such as performance and autonomy, according to the specific needs of each customer.

However, before hitting the streets of large urban centers, the driver will undergo adaptation and user training, even in the most basic version of the vehicle. Capable of reaching speeds of 100 km per hour, several customizations are available that include having three fixed seats or just one and other adaptations based on the driver’s preference.

Although some have raised questions about problems with finding maintenance for such a specialized vehicle, the Brazilian CEO guarantees that it can be done by traditional mechanics and is very simple; at around two hundred parts and pieces, the car has far fewer parts than traditional automobiles.

The company initially produced 100 units for its launch and already has orders from more than twelve countries, including Argentina, Chile, Ecuador, and others. In fact, the price is one of the main attractions since making similar adaptations to a normal vehicle would cost an estimated $22,000 USD, if not more.

In mid-2018, a similar electric vehicle design was launched, especially for people with disabilities. Initially developed in Hungary, production of the Kenguru moved to Pflugerville, Texas. However, the vehicle’s production failed due to design limitations; it had a capacity for only one person, top speeds of just 45 mph, and other factors.

Wormholes May Actually Work If We Change Our Understanding of Gravity

The National Health Survey, conducted in 2019, showed that 17.3 million people in Brazil over the age of two or older had some type of disability.

Rafael Ferraz, 38, has been disabled for eleven years and says that few people can afford to adapt a car due to the high cost.

“Adapting any conventional car, even with discounts for people with disabilities, would always end up doubling the cost,” Ferraz, who is an accessibility and inclusion consultant, told The Debrief.

“This, in fact, is the main obstacle. Because this is a group with multiple expenses, such as rehabilitation, medication, caregivers, and so on, the car for the disabled person should be less expensive.”

“At least now, with this new vehicle created for us, it will help many people who use wheelchairs.”