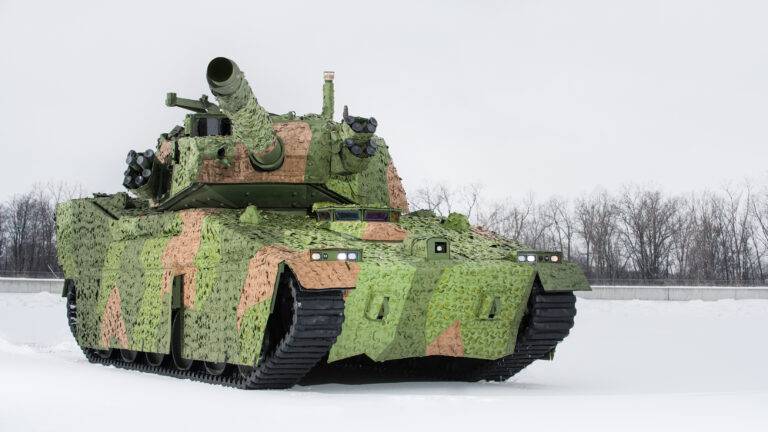 The Army’s Next Generation Prototype Tanks Have Arrived


Soldiers with the 82nd Airborne at Fort Bragg will soon begin testing prototypes for the Army’s light tanks of the future.

Last week, the Army announced that two prototype tanks jockeying to be America’s light armored vehicle of the future are in the process of being delivered to the 82nd Airborne Division at Fort Bragg, North Carolina.

“Soldiers of the 82nd Airborne will soon get the chance to do something no U.S. infantry Soldier has done in 26 years – employ a dedicated mobile, direct fire vehicle platform against hardened positions, dismounted personnel and light armored vehicles,” the Army’s statement reads.

The prototypes are being delivered by BAE Systems Land & Armaments and General Dynamics Land Systems, who were awarded contracts in December 2018 worth $375.9 million and $335 million, respectively. The contracts are part of the Army’s Mobile Protected Firepower initiative.

At the first of the year, 82nd Airborne soldiers will begin a six-month assessment of prototypes to help determine which vehicle will become the Army’s next generation light armored vehicle.

BACKGROUND: How Did We Get Here?

In 2014, a Congressional Research Service report on the Army’s Ground Combat Vehicle Program highlighted American ground forces’ pressing need for a new light armored vehicle. After Congress’ twice canceling programs to replace the nearly 40-year-old M-2 Bradley, researchers noted, “there appears to be no clear way ahead for the development of a next generation infantry fighting vehicle.”

The following year, in the service branch’s Combat Vehicle Modernization Strategy, the Army noted, “Many enemy combat vehicles outgun it [the M-2 Bradley], and it has lost mobility due to the increasing weight of theater-specific force protection upgrades.”

To overcome this gap, in 2017, the Department of Defense launched the  Armored Systems Modernization program. The following year, in December 2018, BAE Systems and General Dynamics Land Systems were selected to deliver 12 prototypes each as part of the Army’s Mobile Protected Firepower (MPF) initiative.

With the MPF program, the Army is looking to field a new and versatile combat vehicle that can provide brigade combat teams an armored advantage. The goal is to strike a balance between having a vehicle that is more robust than the current Stryker and Bradley, but also nimble enough to navigate terrains that disadvantage the heavy M1 Abrams tank.

The MPF program has run slightly behind schedule as a result of the ongoing COVID-19 pandemic—deliveries of the prototype light tanks were originally expected between March and the end of August of this year. But with the recent delivery of the first vehicles to Fort Bragg, the prototypes and MPF program will now move into the “Soldier Vehicle Assessment” stage.

ANALYSIS: How These Prototype Tanks Will Change The Game

Soldiers with the 82nd Airborne will have plenty of options to consider as they begin putting the prototype tanks through their paces.

British multinational defense company BAE Systems has provided an updated version of the M8 Buford light tank. The M8 was originally developed in the early 1990s by United Defense (since acquired by BAE) and pitched to the Army in 1996 as a replacement for the M551A1 Sheridan. Though the lightweight tank was considered a viable candidate to meet the Army’s increased need for air mobility, the program was ultimately canceled in 1997.

BAE says their prototype will leverage many of the previous investments made in the M8 armored vehicle, “including its low-profile design, and proven technologies like the M35 105mm cannon, and an auto-loading ammunition system that allows the gun to fire at a rate of 12 rounds per minute.”

The revamped M8 will also include upgraded “scalable armor” and “situational awareness systems adding to the highest levels of survivability and crew protection.” Exceeding the transport requirement in the Army’s MPF contract, the company says three BAE prototypes can be transported by a single C-17 aircraft.

Squaring off against BAE will be an enhanced form of General Dynamics Land Systems’ (GDLS) Griffin technology demonstrator.

The chassis and automotive components for GDLS’s prototype are derived from the company’s ASCOD/Ajax family of light tanks, widely in use by the United Kingdom. For fire controls and electronics, the prototype will use a nearly identical turret system as the current M1 Abrams heavy tank.

“If you sat in a Mobile Protected Firepower turret, you would think you were sitting in a [M1] SEPV3 turret,” a GDLS spokesperson told Breaking Defense. “It’s all the same displays, architectures, power distribution, etc.”

The only major difference in terms of firepower is that GDLS’s MPF prototype reportedly has a smaller 105mm cannon, compared to the 120mm gun of the M1 Abrams.

Comparing the two systems against each other, BAE’s prototype offers a smaller, potentially more agile armored vehicle—fitting somewhere in the Army’s current Stryker class of vehicles. Meanwhile, GDLS’s model appears to be a bit more meaty, akin to a “younger brother” of the M1 Abrams tank.

Assessment of the two prototypes will begin on January 4, 2021. In the ensuing six months, the Army says soldiers at Fort Bragg will be conducting a wide variety of operational assessments rather than formal tests.  The goal will be not only to weigh in on which vehicle should be the Army’s next generation light tank, but also to “directly inform the development of tactics, techniques and procedures of this new capability.”

Going back to the end of WWII, the United States has been able to assert itself as the world’s only major military superpower thanks to unparalleled air superiority. According to current global defense estimates, if you combined the sum total of China’s and Russia’s airborne assets, the U.S. would still have an advantage of nearly 6,000 aircraft.

Conversely, when it comes to land-based systems, Russia boasts an armored force whose power ranking is over twice that of the United States. And constant antagonist North Korea is nipping at America’s heels with an ever-increasing ground force that ranks only slightly behind the U.S.’s armored fleet.

Ultimately, with the Combat Vehicle Modernization Strategy and MPF initiative, the Army hopes to be able not only to meet any threats posed by near-peer advisories, but also to return to a position of light armored dominance last seen during the 1990-1991 Gulf War.

During the Gulf War, M2 Bradleys destroyed more Iraqi armored vehicles than the M1 Abrams while only losing three light tanks to enemy fire. In contrast, by the early 2000s and particularly in the Iraq War, Bradley proved to be vulnerable to improvised explosive devices (IEDs) and rocket-propelled grenade (RPG) attacks. Before the war’s end, a total of over 150 Bradley vehicles were lost in action.

The Army says the competitive phase of the MPF program is scheduled to conclude when one of the two competing prototype tanks transition into production near the end of fiscal year 2022.

Currently the goal is to have the first field-level unit equipped with new light tanks by 2025. Eventual plans call for a total of 504 vehicles to be added into the Army’s fleet by 2032.