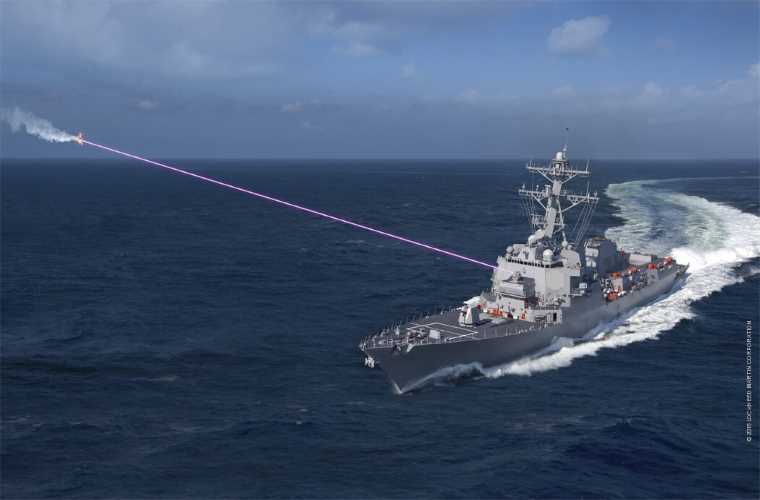 The US Navy Office of Naval Research has successfully tested an all-new, fully electric laser weapon system. Designed to fry aerial threats like drones and missiles, the new weapon system is entirely electric, so it doesn’t require chemicals.

Around the world, military forces are increasingly testing and deploying laser systems. The Debrief recently reported on the Iron Beam weapon system successfully tested by the Israeli Defense Ministry. The U.S. military has also tested several laser-based weapons systems with varying degrees of success, including a ship-mounted laser that blasted an incoming surface drone to pieces.

This latest effort may be the most promising system yet, with the powerful electric laser able to blast enemy threats like drones or missiles out of the sky.

NAVY LASER BLASTS ALL TARGETS FROM THE SKY

Dubbed the Layered Laser Defense system (LLD) by the Office of Naval Research (ONR), the Lockheed Martin designed laser weapon marks a significant technological breakthrough. Unlike laser weapons systems designed and tested in the 1980s, the LLD is entirely electric. As such, the LLD system carries no chemicals or propellants, dramatically improving safety and cost concerns. Also, since the final model is designed for on-ship deployment, the LLD could theoretically operate with unlimited ammunition as long as the ship can provide electrical power.

“The Navy performed similar tests during the 1980s but with chemical-based laser technologies that presented significant logistics barriers for fielding in an operational environment,” said Dr. Frank Peterkin, the ONR’s directed energy portfolio manager. “And, ultimately, those types of lasers did not transition to the fleet or any other service.”

There is also a cost-savings benefit to the Navy for this type of system. For example, Israel’s Iron Dome costs upwards of $150,000 to bring down a single incoming missile, while a disabling shot from their Iron Beam laser system costs at most a few hundred dollars. According to a report in New Atlas, the LLD is expected to cost around a dollar per shot.

The system offers other advantages as well. For example, it is equipped with a high-resolution telescope that lets operators identify and assess the weapon’s effectiveness. The system can also adjust its power output, which can disable and not destroy specific targets the Navy may not want to destroy. The system can also target surface threats like fast attack boats or water-borne drones.

In February, the Office of Naval Research carried out the LLD system tests at the US Army’s High Energy Laser Systems Test Facility at White Sands Missile Range in New Mexico. According to a report by TechSpot, “the LLD was tested against a wide range of targets, including unmanned fixed-winged aerial vehicles and quadcopters as well as the high-speed drones that acted as subsonic cruise missile replacements.” All tests were a success, with the LLD system downing every target.

The Navy noted that there are no immediate plans to deploy LLD into service. However, the technology displayed and the advancements made on laser systems since the 1980s mean that it is likely only a matter of time before ship-bard lasers are commonplace.

The Space Manifold, A Cosmic ‘Superhighway’ That May Speed Up Future Space Travel

“LLD is an example of what a very advanced laser system can do to defeat significant threats to naval forces,” added David Kiel, a former Navy captain who is a program officer in ONR’s Aviation, Force Projection, and Integrated Defense Department, which managed the testing. “And we have ongoing efforts, both at ONR and in other Navy programs, to keep building on these results in the near future.”

Next Up: Tractor beams!?