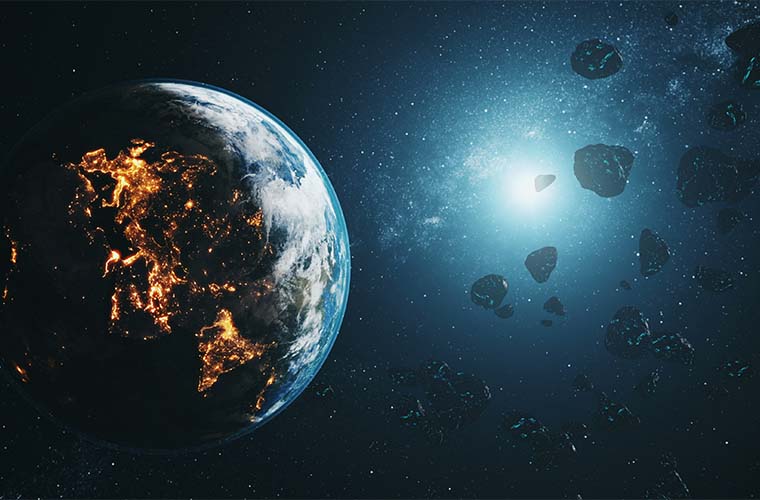 The U.S. Space Force’s 18th Space Control Squadron can track and monitor space objects as small as 4 inches as they rapidly orbit nearly 400 miles above the Earth’s surface.

And while spying on objects in the exosphere, traveling at 22,500 mph and smaller than a can of soda, is impressive, The Office of the Director of National Intelligence (ODNI) wants to do even better.

The Intelligence Advanced Research Projects Activity (IARPA), the technology research arm of the U.S. Intelligence Community, is moving forward with the Space Debris Identification and Tracking program, or SINTRA, which aims to develop the technology to detect and track space objects between 1mm to 10cm in length.

“Space debris affects all space missions, including those of the intelligence community,” said SINTRA program manager Dr. Alexis Truitt. “It’s a worldwide problem, and it’s not going away.”

Underscoring Dr. Truitt’s point, there have been several near-catastrophic events and increased concerns over the ever-growing mass of space objects currently orbiting the Earth in recent years.

In two separate incidents last year, the International Space Station was forced to adjust its orbit to avoid smashing into space objects created by Chinese and Russian anti-satellite missile tests. In a 2021 study, researchers from the University of Utah claimed that Earth was on course to develop its own Saturn-like ring made entirely of orbital trash.

More alarming, a recently published report says there is now a six to 10 percent chance that deorbiting space debris will seriously injure or kill someone on Earth within the next decade.

“There are currently over 100 million pieces of debris greater than 1 mm in size. “This type of debris is often called ‘lethal non-trackable’ debris because of how difficult they are to detect,” said Dr. Truitt. “And they are traveling ten-times faster than a speeding bullet and can cause significant damage.”

According to NASA, the average impact speed of a piece of orbital debris colliding with another space object is roughly 22,360 mph. Because of the incredible speeds involved, a relatively small piece of orbital debris can cause significant damage to satellites or crewed space vehicles. A space object with just a mass of 8.8 lbs could easily generate the same force as a 4-door car traveling at 60 mph.

On August 10, IARPA held a proposers’ day event in Arlington, Virginia, inviting industry partners to share their ideas for being able to detect space objects smaller than 10 cm.

In all, 28 different private companies and academic organizations provided 5-minute “lightning talks” on how they could contribute to SINTRA.

Advanced technology hubs like Battelle, Embry Riddle, Leidos, L3Harris, the Universities of Arizona, Maryland, and Michigan, and the U.S. Naval Research Laboratory, were some of the institutions that submitted unique proposals on new methods for detecting small pieces of space debris.

The University of Arizona, Wyant College of Optical Sciences, proposed a petapixel optical imaging and scatter ptychogrphay system that could “enable tracking of space objects with resolution beyond the optical diffraction limit.” The system had been previously developed for the Defense Advanced Research Projects Agency’s (DARPA) Advanced Wide FOV Architectures for Image Reconstruction and Exploitation (AWARE) program.

An example provided by the University of Arizona showed how analysis of specular reflection allowed for remarkably clear and discernible images to be extrapolated from previously unintelligible pixels.

Other technology firms, such as CalypsoAI or Aptima, showed off artificial intelligence-aided software programs designed to detect and identify anomalous or unknown objects in space.

Following the proposers’ day event, IRAPA is expected to open up bid solicitations for SINTRA in the near future. If selected, companies will receive funding to fully develop and demonstrate their ability to detect and track space objects between 1mm to 10cm in length.

“If successful, SINTRA will enable the first tracking capability for the small debris population,” said Dr. Truitt. “It will also improve on our current accuracy for tracking and provide our satellite owners and operators with the right information to make decisions as far as the significant damage that could be caused upon impact.”