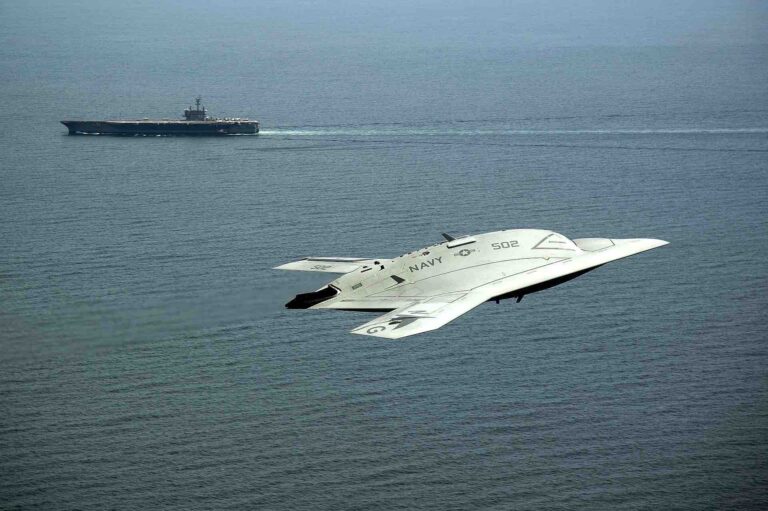 The US Navy and Marine Corps are campaigning to ‘unman the frontlines’ with several new drone programs under development, each aimed at ensuring future unmanned machines can serve beneath the sea, on the surface, and in the air.

In an Unmanned Campaign Framework (UCF) briefing released last March, the Department of the Navy formally stated their commitment to a future of unmanned fighting systems. “To ensure success, the Navy and Marines Corps are tightly coupling our requirements, resources,  and acquisition policies to develop, build, integrate, and deploy effective unmanned systems faster,” wrote Secretary of the Navy Thomas W. Harker.

Military use of unmanned vehicles is not a new concept. During the Civil War, both Union and Confederate forces released unmanned balloons carrying explosives to target  munitions depots. In the 1930s, the Navy developed a radio-controlled drone, the Curtis N2C-2 biplane, to test anti-aircraft systems.

By the time of the Vietnam War, US Forces were using drones regularly for a variety of tasks, which included conducting reconnaissance, dropping leaflets, and scouting out surface-to-air missiles.

Despite their rise in use, drones of the Vietnam era had always been considered a supplement to manned vehicles, and were not considered central to US military strength. Only recently, with the US Air Force’s full-hearted adoption of drone operations (and ever-improving 21st century technology) has drone warfare shown the potential to become the future foundation of the US military.

Introduced in 1995, the MQ-1 Predator drone expanded the conception of drone usage. Used by the CIA and USAF, the Predator was initially deployed as a reconnaissance aircraft. Later, modified to carry two Hellfire missiles, the Predator was used to occasionally hunt and kill targets. Only when the Predator was further developed into the larger, heavier, more capable MQ-9 Reaper did the military have a true hunter-killer drone with long-endurance, high-altitude capacity.

Able to carry 15 times more ordinance than the Predator and cruise at three times its speed, the Reaper is now integral to US Air Force operations. “We’ve moved from using UAVs primarily in intelligence, surveillance, and reconnaissance roles before Operation Iraqi Freedom, to a true hunter-killer role with the Reaper,” USAF General. T. Michael Moseley said in 2006.

Influenced by the Air Force’s integration of drones and related technologies, the Navy and Marine Corps are planning a comprehensive pivot towards unmanned vehicles, a campaign to ‘unman the frontlines.’

A variety of Navy unmanned projects are in development that will comprise aerial, surface, and undersea deployment. The current surface and undersea drone programs are both innovative, and ambitious. For FY2021, the Navy has requested $579.9 million for the research and development of unmanned surface and undersea vehicles. A March 2021 Congressional Research Service report recognized that the Navy is moving away from large surface vessels in the hope of integrating more unmanned vehicles.

And the Navy hopes their pivot toward drones to be undertaken soon. “The Navy wants to employ accelerated acquisition strategies for procuring these large UVs, so as to get them into service more quickly,” the CRS report said. Why the urgency?

“The Navy’s desire to employ these accelerated acquisition strategies can be viewed as an expression of the urgency that the Navy attaches to fielding large UVs for meeting future military challenges from countries such as China.”

Meanwhile, Navy unmanned aerial programs are further along. The RQ-21A Blackjack has been in use since 2014, conducting forward reconnaissance missions. The MQ-4 C Triton is a high-altitude, long-endurance surveillance UAV that should be fully operational by 2023. A new aerial refueling drone, the MQ-25 Stingray, also flew for the first time in late 2019.  The Navy also has an unmanned helicopter, the MQ-8 Fire Scout, designed for reconnaissance, aerial fire support, and precision targeting. Presently, 30 Fire Scouts have been produced since 2000.

Perhaps the Navy’s most notable unmanned aerial project is the X-47B. Currently under development at Northrop Grumman, the X-47B is a semi-autonomous, jet-powered flying wing. The two existing X-47 prototypes have undergone extensive testing, demonstrating the ability to take-off and land on aircraft carriers, with the option to refuel in-air. Derivatives of the X-47 could one day replace manned fighter jets, like the F-18, as the foundation of Navy air power projection.

Yet the Navy’s unmanned development programs have not all gone as planned. The Remote Multi-Mission Vehicle (RMMV), an unmanned system that was intended to deploy from Littoral Combat Ships and serve in a mine-hunting capacity was canceled in 2016, resulting in the squandering of hundreds of millions of dollars.

During recent Middle Eastern excursions by the United States military, the Navy had taken a back seat. This has changed, though, as the US foreign policy establishment shifts its focus toward Asia (especially China) and as the Pacific Ocean becomes a geopolitical flashpoint. To meet the needs that countering China requires, the Navy is promising a gradual pivot to unmanned vehicles. However, the timeline and specifics of its plans remain unclear, which has made the Navy’s Unmanned Campaign Framework a target of criticism.

“I was really disappointed with the lack of substance,” Rep. Elaine Luria, D-Va., said during a House Armed Services’ meeting, “I thought it was full of buzzwords and platitudes but really short on details.”

Bryan Clark, a senior fellow at the Hudson Institute, was also unimpressed with the Navy’s stated plans. “There was really no discussion about what missions or operational applications they saw as being useful for unmanned systems to perform,” Clark said to Defense News. “It really missed the opportunity to describe how the Navy was going to go about maturing these systems and over what time periods.”

Many–if not most–military systems today are trending toward unmanned autonomy. The question remains as to how and when it will happen for the Navy, especially given that our maritime branch of the Armed Services has yet to fully articulate its plans for how this will be achieved in the years ahead.