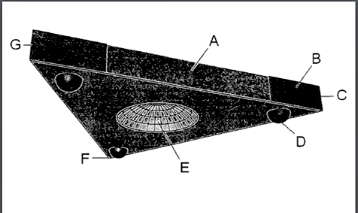 In the latest edition of Tech Talk, The Debrief’s two tech talkers Mr. Stefan Gerhart and Sir Josh Rutledge O.B.E (who is not a knight, or even British), dive into the murky history of UFO Patents. Specifically, they focus their collective gaze on seven patents or patent applications submitted by inventors to the United States Patent and Trademark Office, including some who claim to have cracked one method or another of exotic transportation ostensibly used by UFOs.

The Seven patents looked at by our duo of digital age dreamboats are:

No Image Included with Patent.

Unlike previous episodes, they guys pack a lot of punch into just 30 minutes, keeping it lean and fast-moving while maintaining the fun and light-natured tone that has made their show increasingly popular with Debrief readers and viewers.

Also, during this episode, you will learn about something called antigravity waves, a design patented by the US Navy which was actually approved, a triangular-shaped spacecraft that sounds oddly familiar, how Stefan thinks that stoners call their pot “weedage,” what Josh thinks a “k-field” might be, how Dick Van Patten may be the clue to everything, and even how one inventor claims to have been transported in real life back in 2004, which influenced his patent application.

The guys also look into the murky history of one of the inventors listed on a number of the patents, including the possibility that he may be connected to another figure in UFO lore. You’ll have to watch to see who they think this inventor may be.

Long Before the Phoenix Lights There Was “Incident 40”


Including photos of an alleged UFO, and perhaps one of the first appearances of the Men in Black

The app the guys look at in this episode is called UFO Hunters.

Josh and Stefan think it may be pulling info from the National UFO Reporting Center (NUFORC) or the Mutual UFO Network (MUFON) two organizations dedicated to collecting information about UFO sightings. But somehow, the app registers the latest, quickest, most up-to-date sightings. At least, I think that’s what they said it did. I’m still kinda reeling from the UFO patent granted to the U.S. Navy.

So, enjoy this show about UFO patents and the UFO Hunters app, chuckle along with Josh and Stefan, and for goodness sakes don’t abuse the weedage.

Get even more Josh and Stefan at The Convergence Engima.