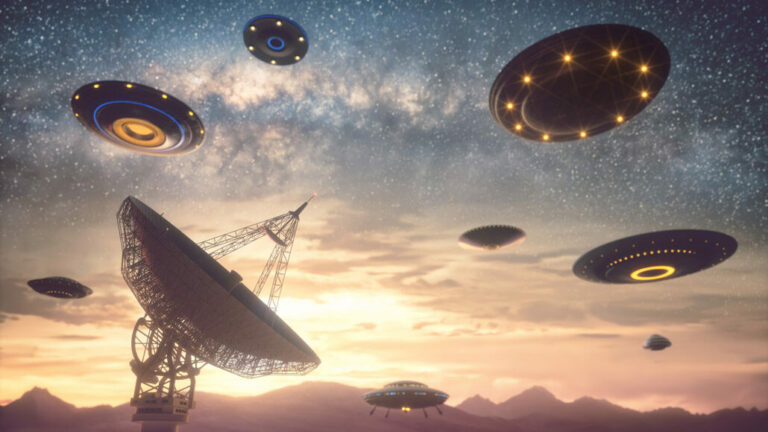 On Monday, the Harvard-Smithsonian Center for Astrophysics announced the launch of a new project aimed at finding scientific proof for the existence of extraterrestrial technology. Dubbed the Galileo Project, the international team of researchers says part of their hunt for ET technology will include examining reports of “Unidentified Aerial Phenomena” (UAP), more commonly known as UFOs.

“The goal of the Galileo Project is to bring the search for extraterrestrial technological signatures from accidental or anecdotal observations and legends to the mainstream of transparent, validated, and systematic scientific research,” a press release issued by the Galileo Project reads.

Heading up the program is one of the most well-known advocates of searching for intelligent alien life within our Solar System, Harvard professor of astronomy, Dr. Abraham “Avi” Loeb. Flanking Loeb is a team of researchers and advisors that hail from a staggering list of prestigious academic institutions including, Harvard, Princeton, Cambridge, Caltech, Yale, Arizona State, University of North Carolina, and Stockholm University.

The Debrief has previously provided extensive coverage on the scientific community’s growing interest in targeting alien technology, including NASA funding research specific to locating extraterrestrial “technosignatures.” However, these endeavors are almost exclusively focused on detecting alien technology lurking deep out in the cosmos.

In contrast, the Galileo Project is the first scientific endeavor to explicitly say not only does it intend to explore possible alien artifacts in our near Solar System, but the program also intends to examine the recent resurgence of UFO or UAP reports as potential evidence that advanced alien life may already be here on Earth.

According to press materials provided by the Galileo Project, the impetus for exploring whether UFO sightings here on Earth could represent advanced alien technology is primarily spurred by the U.S. Department of Defense’s renewed interest in the subject of “Unidentified Aerial Phenomena.”

In the past few years, the Pentagon has publicly released several videos captured by Navy pilots showing what it says are “aerial phenomena that remain unexplained.” The DoD has also formed an officially sanctioned “UAP Task Force,” and at the end of June, the Office of the Director of National Intelligence (ODNI) released its highly anticipated “Preliminary Assessment of Unidentified Aerial Phenomena.”

According to the ODNI report, task force investigators could only identify one incident out of 144 military reports of claimed UAP encounters as having a prosaic explanation. Of those nearly 150 reports, ODNI said, 18 incidents or 21 reports demonstrated “unusual UAP movement patterns or flight characteristics.” The report authors described some of these unusual characteristics as “remaining stationary in winds aloft, moving against the wind, maneuver abruptly, or moving at considerable speed, without discernible means of propulsion.”

“After the recent release of the ODNI report on Unidentified Aerial Phenomena (UAP), the scientific community needs the determination to systematically, scientifically, and transparently look for potential evidence of extraterrestrial technological equipment,” said Dr. Loeb in a press release. “The impact of any discovery of extraterrestrial technology on science, our technology, and on our entire world view would be enormous.”

With over three decades of Ivy League professorship, Loeb boasts a gaudy academic pedigree, including having served as the longest-reigning chair of Harvard’s Department of Astronomy (2011-2020), contributions to over 900 peer-reviewed academic papers, and being a member of the President’s Trump’s 2020 Council of Advisors on Science and Technology. In 2012, Loeb was recognized by Time magazine as one of the “25 Most Influential People in Space,” his photograph appearing alongside Elon Musk.

Loeb also bears the distinction of being one of the most controversial figures in space science.

In 2018, Loeb caused quite a stir in the scientific community when he and co-author Shmuel Bialy published a paper in the Astrophysical Journal Letters asserting that the first interstellar object ever to be detected passing through our solar system in October 2017, ‘Oumuamua, could have been an artificial extraterrestrial object.

The greater scientific community has primarily criticized Loeb for claiming that ‘Oumuamua could have originated from some advanced ET civilization. In a prior interview with The Debrief, Dr. Paul M. Sutter, a research professor at the Institute for Advanced Computational Science at Stony Brook University and author of How to Die in Space: A Journey Through Dangerous Astrophysical Phenomena, said, “Dr. Loeb is making a giant claim based on no evidence. Just because we don’t understand something, it doesn’t mean we get to declare it’s aliens. Lack of evidence does not give you the license to assert whatever you want. That’s not how science works.”

In response to these criticisms, Loeb has only become more entrenched and vocal in his views on ‘Oumuamua.

In 2020, Loeb and Harvard Ph.D. candidate Thiem Hoang published another paper in the Astrophysical Journal Letters, disputing one explanation that ‘Oumuamua was a large chunk of Hydrogen ice. In his recently published book, Extraterrestrial: The First Sign of Intelligent Life Beyond Earth, Loeb outlines his reasoning for affirming ‘Oumuamua could be humanity’s first evidence for not being alone, while simultaneously chastising the scientific community for being dogmatically closed-minded to the idea.

In addition to the Pentagon’s interest in mysterious objects seen flying about U.S. airspace, the Galileo Project ties in some of the still unresolved aspects of ‘Oumuamua in justifying serious scientific scrutiny of “unidentified aerial phenomena.”

“The existing data on UAP and ‘Oumuamua are sufficiently anomalous to motivate the collection of additional data on UAP or ‘Oumuamua-like objects and to test whether such objects may be Astro-archeological artifacts or active technological equipment produced by one or more putative, existing or extinct extraterrestrial civilizations (ETCs),” the press release by the Galileo Project reads.

The goal of the Galileo Project will be to “identify the nature of UAP and ‘Oumuamua-like interstellar objects using the standard scientific method based on a transparent analysis of open scientific data to be collected using optimized instruments.”

Currently, the team of scientists says they plan on following three primary avenues of research in their pursuit of finding evidence of alien technology.

The first scientific thrust will involve obtaining “high-resolution, multi-detector UAP images” in hopes of “discovering their nature.” Researchers say they plan on achieving this goal by searching for UAP using a network of high-fidelity telescopes and detector arrays that will be distributed in select locations.

Additionally, press materials from the Galileo Project say, “We anticipate extensive Artificial Intelligence/Deep Learning (AI/DL) and algorithmic approaches to differentiate atmospheric phenomena from birds, balloons, commercial or consumer drones, and from potential technological objects of terrestrial or other origin surveying our planet, such as satellites.”

While many have criticized the Department of Defense’s unwillingness to share evidence collected by military sensors on UAP, the Galileo Project says their data “will be open to the public and the scientific analysis will be transparent.”

The Galileo Project says it also intends to “design advanced algorithmic and AI/DL object recognition and fast filtering methods in hopes of discovering “potential one meter-scale or smaller ETC [extraterrestrial civilization] satellites that may be exploring Earth.

Finally, peering a little further out into space, the Galileo Project says it aims to use existing and future astronomical surveys to discover and monitor potential “‘Oumuamua-like interstellar objects” that might pass through the solar system.

In an email to The Debrief, Loeb clarified that the new project’s main goal will be examining possible extraterrestrial technologies that come within or near the Earth’s atmosphere. “The search for technosignatures on planets around other stars by telescopes like JWST [James Webb Space Telescope] involve detection of signals carried by light, such as industrial pollution or flashes from light beams. Instead, the Galileo Project focuses on physical objects that arrive close to Earth,” said Loeb.

Although the Galileo Project is not shying away from studying “Unidentified Aerial Phenomena,” a topic that is considered still largely taboo by many in mainstream science, researchers say they will not be engaging in any retroactive analysis of existing images, radar data, observations, or anecdotal reports of past claimed UAP events. “These are not conducive to cross-validated, evidence-based scientific explanations,”said Galileo Project co-founder, Frank Laukien.

Similarly, during a press conference on Monday, Loeb and Laukien, both seemingly dismissed the idea of working with the Pentagon’s ongoing UAP investigations. “Most of the [military] data  is not available because it has been collected by classified systems,” explained Loeb. “We don’t want access to classified data. We want to be transparent and provide data that is completely open to the public.”

Another prominent advocate for the serious study of UAP, former Deputy Assistant Secretary of Defense for Intelligence, Christopher Mellon, told The Debrief  there was benefit to seeing coordination between the U.S. Government and independent scientific groups like the Galileo Project.

“Although this is first and foremost a national security issue,” said Mellon in a text message, “ an independent scientific panel should be formed and given access to the classified information to help broaden the discussion and overcome the unfortunate but inevitable distrust many people have of information supplied by the USG on this issue”

Adding to this point, in a recent blog post Mellon said, “The involvement of renowned mainstream scientists could be useful both for understanding what is occurring and helping the press, public and academia grasp the significance. Once again, the costs are small and the potential benefits are great.”

“We’re not making extraordinary claims,” said Laukien. “All of those advocating for extraordinary evidence before they look through these telescopes, I think that’s misguided. I think we should look and dare to look through new telescopes and agnostically record and interpret the data according to the scientific method.”

“If you say, ‘I need extraordinary evidence before I engage in this activity,’ then you will never find it,” added Loeb. “What I say is, extraordinary conservatism leads to extraordinary ignorance.”