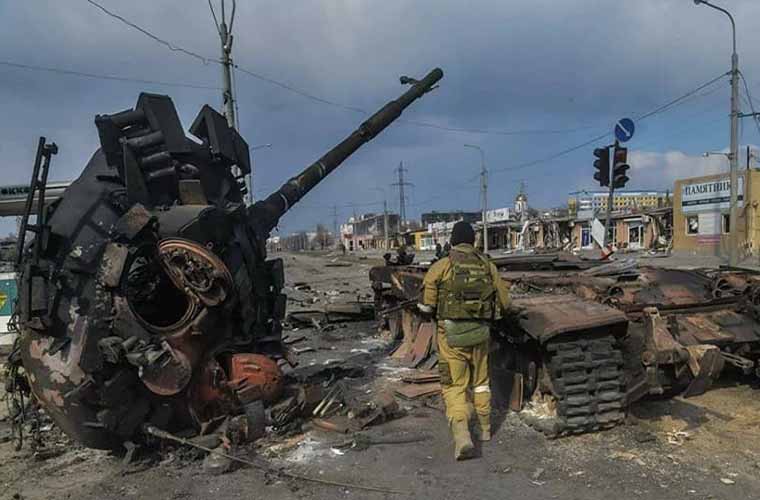 Here is The Debrief’s update of the conflict as of March 25.

On March 24, the Ukrainian government stated for the first time that Russia’s initial campaign to rapidly seize major Ukrainian cities and force a regime change had failed.

According to the head of President Zelensky’s office, Mykhailo Podolyak, Russia is now entering a “protracted phase” in the war due to high casualties, significant losses of equipment, and lack of meaningful progress.

Russia’s new campaign strategy appears to be focused on establishing defensive positions in occupied territories and setting conditions for a protracted war of attrition.

Russia’s offensive operations will now be primarily focused on the heavy use of air, artillery, and rocket/missile fires to bombard major Ukrainian cities at stand-off distances. Consequently, the threat to civilian casualties in these high-population centers remains exceptionally high.

At this point, Russian military leadership has also likely accepted that a northward push to encircle and destroy most of Ukraine’s conventional military forces fighting along the Donbas line is no longer feasible.

Notwithstanding, Russia will probably continue to apply limited offensive pressure on Ukrainian forces operating in the east on the Donbas line and near Mykolayiv, Kryvyi Rih, and Zaporizhya. The goal being to set conditions so that, if and when Mariupol falls, Russian forces would be able to resume a northward push to encircle Ukrainian troops in the east operating under the aegis of the Joint Forces Operation (JFO)

On the flip side, Ukrainian forces are engaging in small-scale counterattacks to try and dislodge Russian troops from occupied territories before they can become firmly entrenched.

Russian forces west of Kyiv have been engrossed in fending off Ukrainian counterattacks in the occupied areas near Irpin, Bucha, Hostomel, Vorzel, and Moshchun.

Russia would like to set conditions for a prolonged occupation by establishing entrenchments and fortified strongpoints in the area west of Kyiv. However, so far, Ukrainian counterattacks have forced Russian forces to be unable to maintain or develop static defenses.

East of Kyiv, Russian forces attempted another unsuccessful advance towards Brovary, roughly 10 miles from the capital. As of March 25, the closest Russian troops have been able to advance was in the area of Velyke, approximately 18 miles east of Kyiv.

Russian forces also engaged in several unsuccessful small-scale sporadic attacks on the outlying areas of Chernihiv and Kharkiv. On March 24, the Ukrainian General Staff reported forces had repelled another localized attack on the city of Izyum, 70 miles southeast of Kharkiv.

Overall, in the last 24 hours, Russian forces continued heavy shelling on the cities Chernihiv, Kharkiv, and Sumy without conducting any meaningful, coordinated ground attacks. The humanitarian situation in these cities remains extremely poor due to indiscriminate fires and Russian targeting of crucial infrastructure.

Along the Donbas line, Russian forces made several minor advances in Donetsk and Luhansk Oblasts, securing the towns of Rubizhen and Popasna. As of March 25, there are reports of ongoing fighting near Avdiivka and Ocheretyne, northwest of Donetsk.

In the southern area of operations, Russian troops continued their slow, grinding assault on the besieged city of Mariupol.

On March 24, Ukrainian officials confirmed Russian troops had seized the Church of the Intercession of the Mother of God in the center of Mariupol. However, as of March 25, Russian forces had yet to fully seize the city. Mariupol has been cut off and encircled by Russian troops for nearly a month now.

On March 24, local Ukrainian officials reported Russian forces had made an unsuccessful advance towards Kryviyih Rih. There were no other reports of any offensive operations along Russia’s two additional northward thrusts toward Mykolayiv and Zaporizhiya in the last 24 hours.

Based on open-source imagery, including satellite and FIRMS data, and some on-the-ground sourcing, The Debrief assesses that a complete encirclement of these forces has not yet occurred.

However, there are indications that Ukrainian forces have effectively engaged in a series of coordinated counterattacks to set conditions to envelop Russian troops in an Irpin salient and threaten to disrupt Russia’s central-western supply hub, believed to be near Ivankiv.

Whether Ukrainian forces can effectively cut off Russia’s western advance on Kyiv remains unclear. However, by maintaining continuity of contact, Ukraine is preventing Russian troops from being able to establish fortified defensive positions and regain fighting equilibrium during periods of operational pause.

The Russian forces near Irpin are believed to be composed mainly of VDV (airborne) troops. The VDV is revered as some of the Russian military’s best equipment and well-trained forces. However, these mechanized light infantry troops have suffered significant losses and have been in constant combat for over a month now.

If Ukrainian forces can successfully contain forces near Irpin and cut-off Russia’s western supply line, this would be the most decisive event in the war so far. Because of this, the western suburbs of Kyiv will be a key area to keep an eye on in the next few days.

On March 25, Oleksiy Arestovych, a key aide to Ukrainian President Volodymyr Zelensky, said Ukrainian forces had carried out a strike on the southern command post of the 49th Russian Army.

The Commander of the 49th Combined Arms Army of the Southern Military District, Lieutenant General Yakov Rezantsev, was reportedly killed in the strike.

So far, neither the Ukrainian General Staff nor Moscow has confirmed Rezantsev’s death. The Debrief, likewise, cannot independently verify the claim.

However, if verified, Rezantsev would be the sixth Russian General killed in Ukraine. The Russian flag officers previously reported to have been killed in action are:

Open-source data suggests Ukraine has gained more tanks than it has lost during the first month of war with Russia.

According to the open-source-intelligence site Oryx, Ukraine has had at least 75 tanks destroyed or captured as of March 25. However, Ukrainian forces have seized 122 Russian tanks during this same time, meaning Ukraine has managed a net gain of 47 tanks at Russia’s expense.

Due to Russia’s over-extended and poorly-protected supply lines, many of the tanks captured by Ukraine have been abandoned by their crews after they ran out of gas. Otherwise, in good working condition, Ukraine can quickly requisition these war trophies and turn them against their former Russian owners.

Russia will likely continue to use stand-off artillery, missile, and aerial bombardments against the Ukrainian cities of Sumy, Kharkiv, Chernihiv, Mariupol, Mykolaiv, Zaporizhia, Kryviyih Ryh, and Kyiv. The threat to civilian casualties in these significant population centers remains exceptionally high.

Ukrainian forces will continue to try and set conditions for a major counteroffensive in western Kyiv Oblast aimed at reclaiming lost territory and encircling Russian forces near Irpin, Bucha, and Hostomel.

Forecasted high winds and rain will likely adversely affect aerospace operations for the next several days. Ukraine could likely exploit this opportunity for reduced Russian air support to expand counteroffensive operations on the ground.

Russian forces will continue to attack Mariupol, likely capturing the city within the coming weeks.

The Debrief assesses the highest risk areas for chemical weapons use in the Ukrainian to be the cities of Mariupol, Mykolaiv, Zaporizhia, and Kyiv and Chernihiv oblasts.